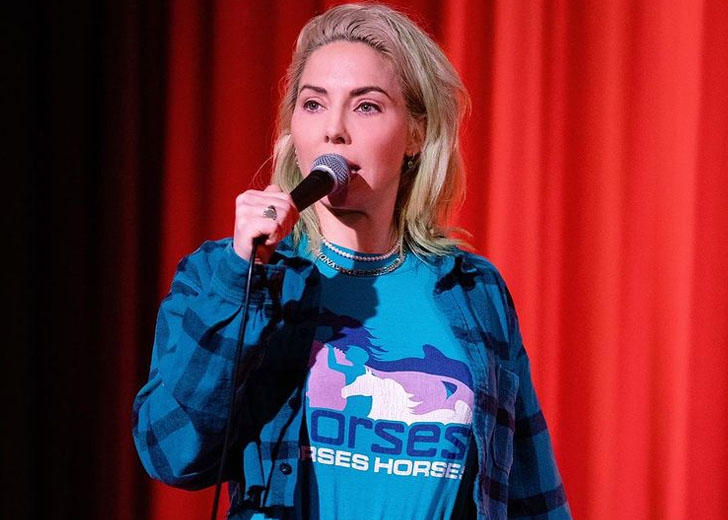 American comedian Whitney Cummings has firmly remained private about her romantic life in the past, but that seems to be changing now.

She has been in a long-term relationship with her boyfriend, Alex Barnes. Since the initiation of their relationship, she has occasionally featured her partner via her Instagram stories.

Additionally, she has shared a few details about her togetherness with her beau during her comedy shows. Here is everything you need to know!

Whitney Cummings and Alex Barnes met during the pandemic

While several relationships broke during the pandemic, Cummings found herself a lovable boyfriend in Alex Barnes – a veterinarian.

In her August 2021 interview with LIVE with Kelly and Ryan, the host asked the comedian to share some details on how she first met her now-boyfriend.

She mentioned that it happened during the start of the pandemic. One of the dogs she was fostering attacked another one of her dogs, resulting in the small dog’s eye coming out. She immediately rushed to a veterinarian.

However, since it was the pandemic’s beginning, people were freaked out about the pandemic. So, she knocked on a few veterinarians’ offices, but they didn’t let her in, and “no one was interested in helping me with his bleeding dog.”

“And he [Alex] is a veterinarian and he came out and recognized me. And started to help me. And he is younger than me, he is like 31 years old, he is super hot,” she added.

She continued, “Dan Levy from Schitt’s Creek is a really good friend of mine. And we always joked about veterinarians are not so hot. He is like, ‘Trust me. This new batch of young vets are hot.'”

As she went on, Cummings talked about how she felt when she saw her now-boyfriend. “I’m holding a bloody dog, panicking, but I was like I need to take a picture of him to send it to Dan.”

At the end of the conversation, the hosts and Cummings also talked about how the comedian ordered a rock climbing wall and placed it in her backyard just for her boyfriend.

After meeting each other for the first time, Cummings and Barnes later had some more conversations. As time passed, they eventually began dating. They officially started their relationship in July 2021.

Whitney Cummings sees herself having kids with Alex Barnes

Just three months after Cummings and Barnes started dating, the comedian was on a comic tour – Touch Me Tour – show, and it was held in Anaheim, California.

At one moment of the show, she publicly talked about her personal life – a thing she had never done before. She first said that she isn’t great at picking guys or relationships.

“But here’s something I want to announce to you guys I’ve never said before like no one knows,” she added. “I’m dating someone and I want to be the one to propose to him.”

Continuing her statement, she said, “Look, I’m 39. I don’t have time for him to plan a [expletive] scavenger hunt proposal. So Alex, will you make me the happiest girl in the world and let me buy my own engagement ring since you can’t afford the one that I want?”

Cummings then stated that her boyfriend is great, and their relationship is also going great. Adding more, she said she could see herself having children with him, but she doesn’t want to do it until they do a “23 + Me test. Need to see those results first.”

As of now, their relationship is still going on strong. Currently, the information on Barnes is limited. He could be found on Instagram under the username of @alex___barnes, but his account is private.

Before she met her present boyfriend, Cummings was previously engaged to Miles Skinner, the former VICE Media executive.

The formerly engaged duo started dating around late-2016 after meeting online. She first revealed her relationship with Skinner in November 2017 in a candid conversation about online dating on Conan.

She said, “You either find a husband or you get murdered. I’m in a good relationship now, it’s been going on for 10 months. We met on the internet.”

They got engaged on September 4, 2018, when Skinner surprised Cummings with an engagement proposal on the latter’s 36th birthday. She had even shared some snaps and clips from the proposal via Instagram.

Later, in November 2019, she exclusively told US Weekly that she had put the wedding plans on hold and called it stressful. She said, “Yeah, you know, it’s stressful. With everything that’s going on, it’s expensive.”

“I don’t want to be that person who does the ‘sponsored’ wedding and like have to do that … I’m trying to find a way to do it. We’ll see,” Cummings added.

Just three months later, on February 5, 2020, she revealed during her Good For You podcast that she has called off her engagement with Skinner. By that time, the couple had been engaged for like a year and a half and were together for a much longer time.

“I am not wearing an engagement ring. I am no longer engaged. Nothing nasty, no drama. It just wasn’t — I feel like nobody will believe me — I truly just was not ready to plan a wedding, the whole thing really overwhelmed me.”

She mentioned that it was difficult to plan or focus on a wedding following her mother’s stroke. “My mom is in bad shape health wise. The idea of planning was just really overwhelming and kind of sad to me.”

In the end, Cummings mentioned that she felt like planning a wedding should be fun and not a complete bummer.