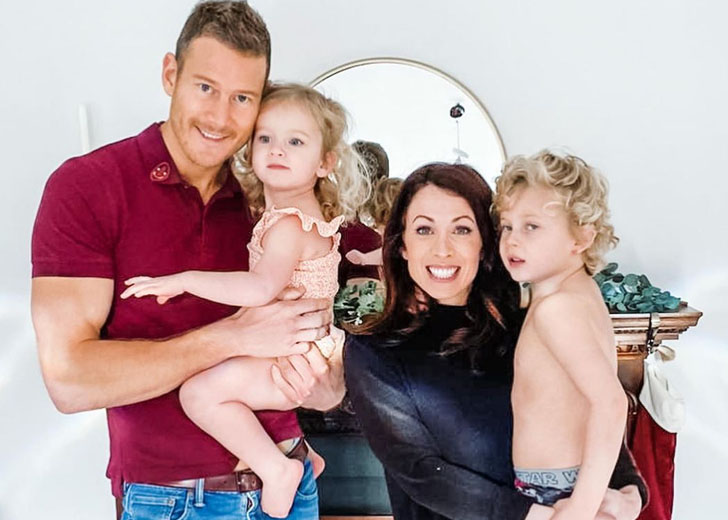 How to raise a kid with autism?

Born on January 28, 1985, Tom Hopper is an English actor widely known for his roles as Sir Percival in the BBC series Merlin, Billy Bones in the popular Starz series Black Sails, and Luther Hargreeves in the hit Netflix series The Umbrella Academy.

Hooper is one of the most talented and renowned actors in the field of entertainment. His exceptional acting talent in all genres of film and television is quickly worming its way into the hearts of admirers.

Tom Hopper Is Married to His Wife Laura Hopper

Talking about his love life, Hooper is a happily married man.

The actor got married to his wife Laura Higgins in June 2014 after the beautiful duo first met in 2009 at a party. They soon started dating one another, and after being together for over five years, they decided to tie the knots.

Recalling their first meet, Hopper’s wife took to Instagram in May 2015 and posted a picture of a party where they clapped eyes on each other for the first time.

Likewise, in December 2021, she posted a picture of herself flexing her beautiful engagement ring. “So on Christmas Eve after 7 years of marriage Tom proposed,” she captioned the picture.

She described, “Music was playing, the garden was full of hundreds of lights, a path that led me to Tom. Such a beautiful thing to do x (Pretty glad he did it Christmas Eve because yesterday I got drunk. Very drunk. To be fair I was worried because the kids have covid but I also cried about not being with my mum).”

And even though the duo likes to keep their life private, they shared glimpses of their daily activities on their family’s YouTube channel The Hopper Family. But they have not uploaded anything on the channel since a year ago.

Besides, Hopper and Higgins have two kids: Freddie Douglas Hopper and Truly Rose Hopper. In 2015, the couple welcomed a son, Freddie, and in 2018, they welcomed a daughter, Truly.

Who is Laura Higgins?

Hopper’s wife Higgins is also an actor, and fans recognize her as Kayleigh Jackson on Doctors and Jenna Gibbs in Holllyoaks.

And even though the husband and wife duo has never featured opposite each other in movies, they were seen as Billy Bones and Esther in the television series Black Sails, the Treasure Island prequel.

Tom Hopper and His Wife’s Take on Parenting

Many Hollywood celebrities and actresses believe it is ideal for keeping their children out of the paparazzi, as children need a lot of personal space to learn and grow. In contrast, the media, regrettably, is always on the lookout for those who make mistakes. Any mistake or misconduct is regarded as important news.

However, actor Hopper and his wife Higgins have been vocal and open about their child to the world as they had something important to address.

In July 2020, the Game of Thrones actor and his wife decided to open up about their son Freddie, who was diagnosed with autism. They found out that their son was nonverbal just before his fifth birthday in March.

Since then, the duo has been sharing their experiences in the hopes of assisting other parents regarding how someone can look after autistic children.

“We thought, we’ve got to do this for the parents going through this, so they don’t feel alone,” Hopper told People in July 2020.

In addition, he said that any couple needs to trust each other and the journey, and most probably right things will happen.

The couple noticed that his son was different than other kids when he was just 18 months. When their son stopped responding to his name and started showing slower growth and progress as he got older, the duo realized something was wrong with their son.

Moreover, in order to understand their son better, it was essential for them to “recognize the regression,” according to Hopper’s wife. They both immersed themselves in autism research and educational programs.

Later, they quickly understood, as all parents do, that each child is unique, and no two autistic children are alike. “Learning Freddie was the most important thing for us,” she added.

“We have to figure out what works and what doesn’t for him.”

In addition, what helped their son’s behavior was cutting out processed sugar from their son’s diet. Lately, the couple has been looking after their son happily and believes that their son is capable and unique in his own way.