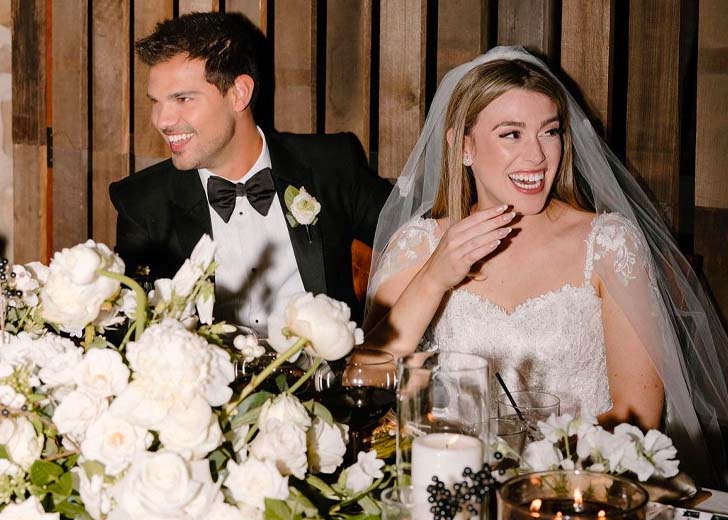 Taylor Lautner and his wife, Taylor Dome, known as Tay Lautner, have been married for a month.

They got married on November 11, 2022, and on December 11 of the same year, the pair took to Instagram to celebrate their one-month anniversary.

Looking at their social media, it seems like the two are enjoying their lives as newlyweds, and their lives are filled with happiness. And nobody is happier for them than their fans and followers.

Both Lautners uploaded an Instagram post to commemorate their one-month anniversary. The Twilight star uploaded a video of the pair walking away from the camera, holding hand in hand.

While walking, they turn towards the camera to show huge grins on their faces. Then, Taylor threw a peace sign while Tay did a heel clap.

The sound Taylor chose for the post couldn’t be more perfect. He selected a voice-over that said, “This part of my life, this little part, is called happiness.”

In the captions, he wrote, “One month married to you.”

Tay, on the other hand, posted a picture of the two on their wedding day. In the black and white photo, the pair are wearing their wedding outfit and looking at the camera while they hold their hands.

She wrote, “one month of being your wife” in the caption and ended it with a white heart emoji. Taylor first commented, “Werkkkkk.”

Then, he read the captions and apologized to his wife, writing, “oh sorry just saw ur sweet caption. Love you baby.”

Taylor Lautner and his wife, Tay Lautner, celebrated one month of getting married. (Source: Instagram)

Fans and followers commented on the posts by Lautners as well, congratulating the pair. @cass.the.angel_ina wrote, “A month flew by! Congratulations,” and @tlautnerbrasil commented, “Happy one month, Mr. and Mrs. Lautner!”

@nicolemarieivanov noted, “well that was just the cutest thing I’ve seen all day,” and @fruitymills11 wished them the best for their first holiday as a married couple, “Have a nice first married Christmas holiday together!”

All in all, everyone was happy for the Lautners.

Taylor and Tay began dating in 2018 after the actor’s sister, Makena, introduced them. Taylor confessed that Tay had no idea he was interested in her.

He told TODAY that Tay thought he was simply being kind to her since she was his sister’s friend. But later, she comprehended what was going on and eventually reciprocated Scream Queens actor’s feelings.

Taylor said, “The first three, four or five times I hung out with Tay she had no idea I was interested in her and thought I was just being nice to my sister’s friends. It took it took a while for her to realize what was actually going on.”

After dating for over three years, the pair got engaged at a winery in the Paso Robles on November 11, 2021. According to Vogue, the couple married on November 11, precisely one year after they became engaged.

The newlyweds exchanged vows in front of 100 relatives and friends at Epoch Estate Winery outside Paso Robles, California. The duo revealed that they got married on Instagram on November 15.

They shared photographs from their wedding, simply labeling the post “Mr. and Mrs. Taylor Lautner.” According to Vogue, the groom looked dashing in a black Dolce & Gabbana tuxedo, while the bride donned a Winnie Couture wedding gown with lace capes coming off the shoulders.

Since then, Taylor and Tay have been enjoying their married lives.

Who Is Ty Simpkins Dating? His Girlfriend List Seems Long