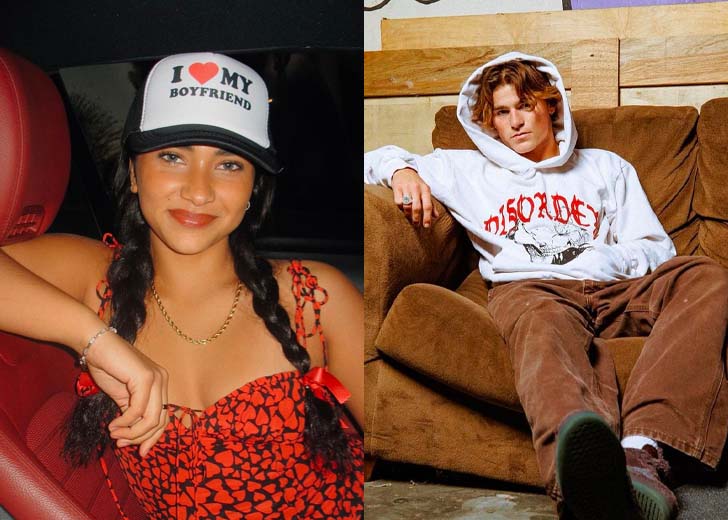 For the past couple of months, the TikToker had hinted that she was dating someone. She uploaded a couple of videos and photos with him but always kept his identity hidden.

She never tagged her boyfriend’s Instagram username in any of her posts. As a result, many believed Gomez was keeping her personal life private because of her last scandal.

She eventually took an extended break from social media after things didn’t work out between them.

She ultimately returned to social media on May 29, 2022. Three months later, she revealed that she was dating her anonymous boyfriend.

Since then, many have asked her to do a boyfriend reveal. But Gomez has been kept silent about it.

Regardless, netizens have done a little digging and have revealed that the TikToker is dating her new boyfriend, Cole Hosman.

Gomez first posted a picture with her new beau on August 25, 2022. She took to Instagram stories to post a mirror image of herself lying in bed with her new boyfriend on top of her.

Since then, the influencer has been posting stories and posts about her dating life. However, she never shared his face or identity.

Since Gomez ignored all the requests for a boyfriend reveal, the netizens took it upon themselves to find out who the mystery man was. They started comparing the clothes Gomez’s partner wore and then dug around to find out that she was dating Hosman.

Hosman is a 21-year-old skater from Chicago and an influencer as well, with a good following on Instagram and TikTok.

The first clue was Gomez’s picture of her hugging her partner from the back while they were at the beach. The mystery guy is wearing white Calvin Klein shorts with the logo embroidered in orange.

Around the same time, Hosman uploaded a photo on his Instagram where he was sporting similar shorts. Similarly, the sandals and hat are worn by Gomez’s boyfriend match Hosman’s.

Moreover, Gomez has followed Hosman on Instagram on his id @colehosman and vice-versa. The first picture she liked of Hoseman was the post uploaded on August 3, 2022, and since then, she has liked all of his Instagram posts.

How Sienna Mae Gomez fell for her new boyfriend

Gomez has spoken little about her new boyfriend and their dating life on social media. However, she wrote her heart out on her blog titled “HOW I FELL FOR MY BOYFRIEND” on September 29, 2022.

In November 2021, Gomez was tired of having situationships and dating people she was not “compatible with at a deep level.” She wrote, “I was exhausted by failed “talking” stages and weird situationships that left me feeling drained, used, or confused.”

As a result, she felt lonely and realized she had not spent time alone. So, she decided to give herself some time and figure out what she wanted.

Instead of focusing on her love life, she put that energy into her business and company. She started a company with her mom, which she said: “gave me so much confidence, drive, and focus.”

Gomez wrote, “It’s much harder to allow yourself to accept less than you deserve when you’re in a positive headspace, taking care of yourself and achieving your goals, so, in the midst of all this good, I decided to make a list.”

The list was about the kind of partner she wanted. “I wanted the next person I was going to be with to be someone who made me feel good, who appreciated me for me, and who positive, happy me would be proud of us for choosing to date,” she confessed.

She prayed and manifested for a best friend and partner who would match her energy, love her and make her feel safe. She believed that manifesting a new boyfriend would bring him to her, which is precisely what happened to Gomez.

She gushed, “I had no idea that a few miles away, the man who would become all of those things for me was crying and praying for the same exact thing.”

When she met her boyfriend, she thought he was cute, but “there were no butterflies or anxiety.” She felt at ease, as if they had known each other for a long time.

She believed she was at ease because she took time to figure out what she wanted, and the right person walked into her life. Gomez wrote that she did not fall in love with her new boyfriend but chose to love him.

All in all, it seems like Gomez is happily dating her new partner!