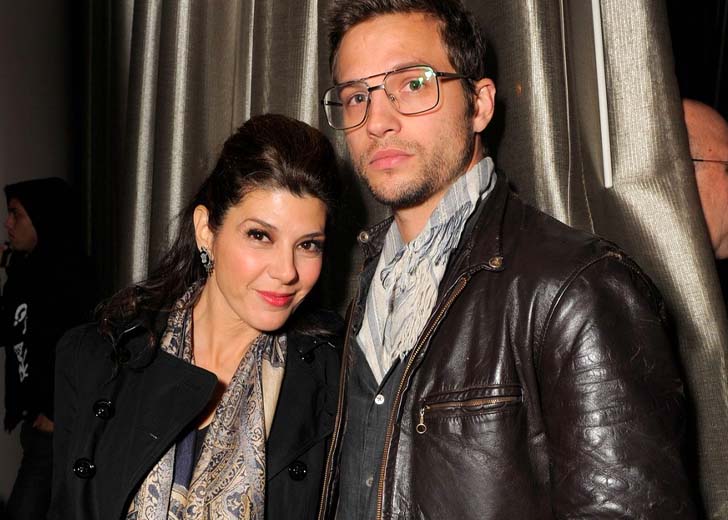 Marisa Tomei is an American actress best known for her performance in My Cousin Vinny, for which she won Best Supporting Actress at the 1993 Academy Awards.

She also gained wide recognition for her role as Aunt May in the Marvel Cinematic Universe, appearing in Captain America: Civil War, Spider-Man: Homecoming, Avengers: Endgame, Spider-Man: Far From Home, and Spider-Man: No Way Home.

Following her notoriety, many admirers were curious about the My Cousin Vinny actress’s dating history and relationship status.

Despite never tying the knot, Tomei has been linked to several high-profile men over the years.

She has had her fair share of hot Hollywood relationships with fellow actor Logan Marshall and was also rumored to be dating Robert Downey Jr.

Many people don’t know Tomei and her co-star Marshall, who both starred in the 2017 film Spider-Man: Homecoming was, once a couple.

Tomei and Marshall have had an on-again, off-again relationship from 2008 to 2013. They first became acquainted while collaborating on a New York theater play.

In January 2013, they were rumored to be engaged. Numerous media sources reported that Tomei’s boyfriend proposed to her and they got engaged.

A source told In Touch, “He popped the question over the holidays. She is very happy about the engagement.”

However, Tomei’s representative refuted the rumors. Her spokesperson exclusively confirmed to E! News that the Oscar winner is not engaged to Prometheus actor Marshall, stating, “There is no truth to the rumor.”

In 2009, according to reports, Tomei stated, “I’m not that big a fan of marriage as an institution.” She said she didn’t know why women needed to have children to be seen as complete human beings.

Tomei’s close friend also told Closer Weekly, “[Marriage] wasn’t something she ever truly pursued — even in her twenties. Work has really been her life force.”

Tomei and Downey Jr. allegedly became close while working together on the sets of Chaplin and Only You in the early 1990s. After falling in love, the two only dated each other from 1993 to 1994.

However, they kept their relationship a secret, appearing together in public only on rare occasions and refusing to talk about it publicly.

Tomei defies the Hollywood tradition of openly discussing romances; she is renowned for being quiet and rarely does interviews or flaunts her beaus on the red carpet.

From 1993 to 1994, the pair quietly dated. According to sources, it was a delightful moment in both of their lives because they had a lot in common and shared interests.

The pair weren’t together for a very long time, and it’s unclear why things didn’t work out for these two Hollywood stars.

Early in the 1990s, Downey Jr. may have struggled to maintain a stable relationship because of challenging circumstances.

Or their hectic schedules played a more significant role. Due to their numerous commitments to various projects during those years, both actors had extremely busy schedules.