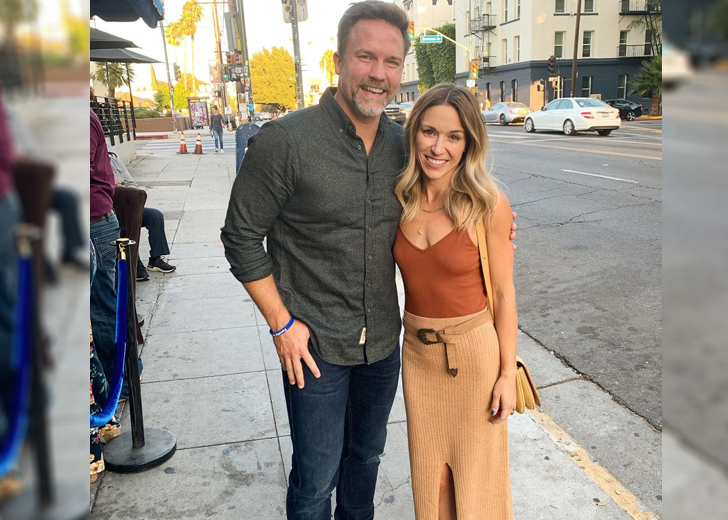 Scott Porter is an American actor who first tasted the limelight after playing the role of Jason Street in the NBC TV drama titled Friday Night Lights (2006-10). Since then, he has earned fame for his performance in numerous acting gigs.

Not only Porter, age 42, has a flourishing acting career, but he also has a blissful marital life with his long-time wife Kelsey ‘Mayfield’ Porter. The two have been a married duo for over eight years now.

Scott Porter Met His Spouse in 2008

The now-married couple met each other a very long time ago, in 2008 when Porter was just a rising actor and his wife, Kelsey ‘Mayfield’ Porter, was a cheerleader (now a casting director).

The two met each other on the sets of the NBC football drama show, Friday Night Lights, and the first meet was enough for them to fall in love. Soon, they began dating each other and the rest is history.

As years passed, their bond became stronger and stronger. Porter and Mayfield’s relationship was quite public and they often made public appearances too.

After being a boyfriend-girlfriend duo for around four years, the American actor thought it was time to take their relationship to a new stage. In January 2012, he went down on one knee and proposed the love of his life. Mayfield accepted the proposal by saying yes and they got engaged.

Following their engagement in January 2012, the couple relished their time together even more. On the other hand, the preparations for their wedding were also going on swiftly.

After being an engaged duo for 15 months, it was time for Porter and Mayfield to walk down the aisle. On the 20th of April, 2013, they shared the wedding vows and officially became a husband and wife duo.

Their wedding ceremony was held in Camp Lucy, Dripping Springs, Texas, and it was witnessed by around 140 friends and family members. Around the same day, he shared a picture via Instagram and captioned it as “Two families became one today. #porterwedding.”

Since their wedding day, Porter and Mayfield have been enjoying their time as a married couple. The love and care they have for each other have grown even more. Porter’s love for his wife can still be seen through his Instagram handle.

The 6 feet tall actor usually shares pictures of/alongside his lovely wife and captions it with some sweet words. For instance, on the occasion of their 8th wedding anniversary, in 2021, he shared a picture from their wedding and wrote a heartfelt caption where he fully showered his love for his wife.

Porter and Mayfield Are Parents of Two

Not only Porter and Mayfield are a good married couple, but they are also amazing parents to their two children.

They welcomed their first child, a son named McCoy Lee Porter, on May 23, 2015. After the birth of their son, Mayfield got to know that she was diagnosed with Huntington’s disease before getting pregnant.

Huntington’s disease is a neurological condition in which the cells in the brain break down over time.

After figuring out that, the couple decided to have another kid, after some months. “She was so brave, and she figured out how we could have a child without passing Huntington’s down,” Porter told PEOPLE during that time.

Later, Mayfield told, “Because I have Huntington’s, any child we have has a 50/50 chance of having it, so to eliminate that, we did in vitro fertilization.” Sometime later, Porter announced that his wife is expecting another child and it is a baby girl.

On August 10, 2017, the couple welcomed their second child, Clover Ash Porter. A couple of days later, Mayfield shared a picture holding her baby, with the caption “Clover Ash was born on August 10th, 9lbs 3oz. We’re over the moon about this new addition!”

Since the birth of their kids, the parents of two are relishing their time as parents and can be seen flaunting pictures alongside their kids.