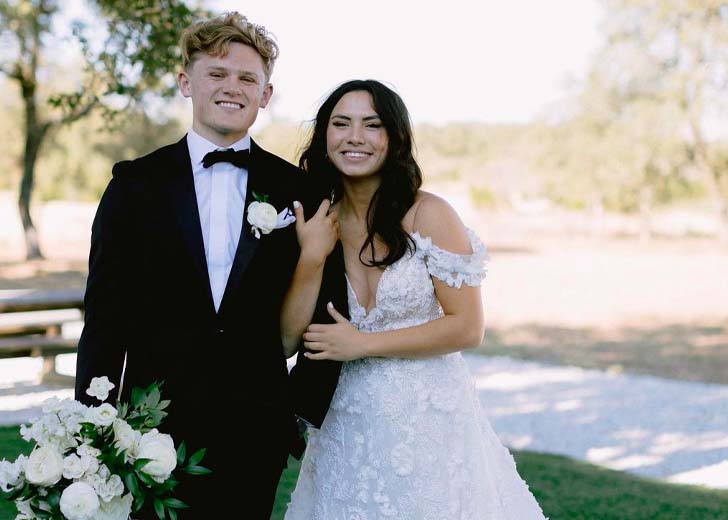 All about Ryan Trahan and his wife Haley Pham’s relationship.

There are a lot of YouTube couples who have made themselves a staple on the platform. Some of them are married, while some are engaged or dating.

Ryan Trahan and his wife, Haley Pham, are one such couple who have amassed a massive fanbase on the platform.

Trahan is a YouTuber best known for his comedic and lifestyle videos. So far, his knowledge and expertise have brought over 10 million subscribers to his self-titled channel.

Similarly, Pham is also a YouTuber. The beauty and lifestyle vlogger with over 2.3 million subscribers on her self-titled YouTube channel. She has also amassed a sizable following on Instagram, with over 930,000 followers.

Here is everything we know about Trahan and his wife’s dating history, engagement, and wedding.

Trahan and Pham are open about their relationship and show it off to their fans and followers. However, they did not reveal their private life much on social media when dating.

It is unknown when they initially started dating. However, it is speculated that they got together in at least late 2018.

Trahan first uploaded a picture with his girlfriend on Instagram on July 11, 2018. He revealed that the duo had collaborated on his YouTube channel.

Trahan and Pham surprised their fans and followers after announcing their engagement on May 18, 2020. The latter uploaded a slew of pictures on Instagram, including Trahan on one knee, a paper that said, “Will you marry me?” and her engagement ring.

She captioned the post, “We’re engaged.” Trahan also uploaded two pictures —  one of him proposing and another of him putting the engagement ring on his now wife.

He captioned it, “I can’t wait to build my life with you 💛.” The next day, Pham uploaded three pictures with her beau and wrote, “Woke up and it wasn’t a dream 🥺💍💖 (or a prank you silly geese).”

She also posted a couple of pictures of her hand, showing off the engagement ring. While many were happy for the pair, they also faced criticism.

Pham was 19 when she got engaged. So, many complained that she was too young to get married and start a family.

The YouTuber uploaded a vid titled “Why I got engaged at 19” and explained why she got engaged so young. She explained that she and Trahan started dating with the intention of getting married.

Moreover, when they were in a relationship, they bought a house together and had a dog named Spock. So, it only made sense for the pair to get engaged and married.

She added that both of them were serious about being together for the rest of their life, so their age did not matter.

Throughout the time the pair were engaged, they uploaded wedding preparation videos, including picking up their wedding dresses, venues, cakes, and flowers, on their combined YouTube channel, Traphamily.

But since October 2020, the pair stopped doing so. This was because they got secretly married on November 18, 2020, amidst the COVID-19 pandemic.

During that time, there were strict rules and regulations, including the lockdown, but the duo did not pay attention to that. Instead, they went along with their plans and got married.

They had invited guests and did not follow the protocols set by the government. They managed to keep their wedding a secret for around two months, but in February 2021, it was revealed by internet sleuths.

As a result, they faced a massive backlash and hate. Many pointed out that they could have done a court marriage and had a party after the pandemic was over.

In April 2021, they uploaded a video coming clean about what they did. They confessed that they got married because they wanted to do so and apologized to their fans and followers.

They took accountability for being selfish and wanted to get married right away. They also deleted their joint YouTube channel and ultimately apologized for their actions.

As of 2022, the pair are still married and enjoying life together. They do not have any children, and it does not look like they are planning for one any time soon.