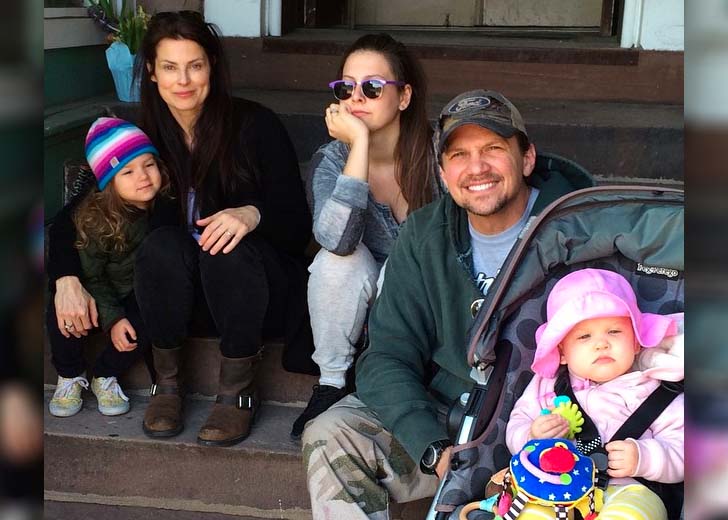 Ryan Haddon is an American journalist and news presenter known for her work at MacNeill/Lehrer NewsHour, on Roseanne Barr’s talk show The Roseanne Show, and on Good Morning America.

Coming to her personal life, Haddon has been married twice. And compared to her first marriage with her ex-husband Christain Slater, her relationship with her current husband, Marc Blucas, is growing.

Her present husband, Blucas, is an American actor whose notable roles include Riley Finn in Buffy the Vampire Slayer, Matthew Donnelly in Necessary Roughness, and abolitionist John Hawkes in Underground.

On July 25, 2009, Haddon exchanged her wedding vows with her present husband, Blucas, and she has two beautiful daughters with him.

Currently, she, Blucas, their daughters, as well as her two children from her previous relationship — Jaden Christopher, born in 1999, and Eliana Sophia, born in 2001 — live together on a 15-acre farm in rural Pennsylvania, as per Wake Forest Magazine.

Speaking with the outlet in March 2019, the actor pointed out that he worked out at their 300-year-old farmhouse and with chores rather than spending hours at an L.A. gym.

Not just that, a glance into his Instagram also shows his humorous side and how much he cares for his family. His IG bio reads, “13 chickens, 2 rabbits, 2 dogs, 2 kittens, 4 kids, 1 wife, 15 acres, 4 kids and one wife, one actor’s dream come true.”

Moreover, before moving to Pennsylvania, Blucas lived in Los Angeles, where he met Haddon, and she was also ready to move to the East Coast to be near family.

“My family is always going to be more important to me than my career,” Blucas told Wake Forest Magazine.

The actor also described how his children are now of an age where they want to be around him. Hence, he had negotiated to appear in fewer episodes of The Fix to ensure he had time to spend with his family.

Who is Marc Blucas?

Apart from being an actor, Haddon’s husband Blucas is a former college basketball player. He played for the Wake Forest Demon Deacons and got a bachelor’s degree in Business.

And his initial goal was to attend law school after graduation. He also partnered with NASCAR Dale Earnhardt Sr. to start a business that offered professional athletes contracts, endorsement, and financial planning advice.

But all that came to a halt when Blucas got a call from John Justus, who needed a basketball player for the movie Eddie. So he went for an audition and landed the role.

“And then the cliche happened. I caught the bug,” Blucas told Wake Forest Magazine. He gave up law school and the partnership with Dale Earnhardt Sr. He emphasized how he had everything lined up for him after college but chose to do something for which he had no prior experience.

Fortunately, it worked fine for him and acting psyched him as basketball did. He said, “It’s just an energy and the excitement of having the pressure to perform certain things.”

Now, Blucas is a celebrated actor who has been praised for his various roles. Currently, he is filming the part of George Walter in the upcoming Netflix television series, My Life with the Walter Boys.