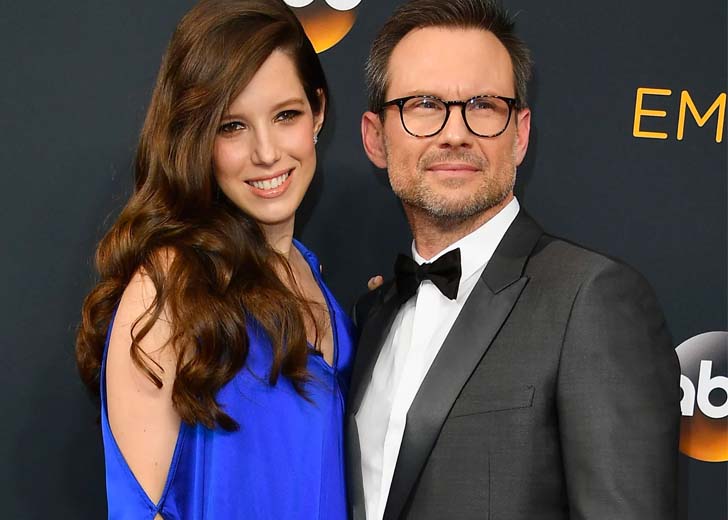 All about Christian Slater and his wife Brittany Lopez!

Christian Slater is an American actor and film producer who gained fame for his role as Jason “J.D.” Dean, a sociopathic high school student, in the satire Heathers. Likewise, he received critical acclaim for his title role in the USA Network television series Mr. Robot.

For his role as Mr. Robot, he received the Golden Globe for Best Supporting Actor in 2016, with further nominations in 2017 and 2018.

Slater has also appeared in movies like King Cobra, Suicide Squad: Hell to Pay, and We Can be Heroes.

Coming to his personal life, the actor is presently married to his wife, Brittany Lopez. The couple has been married to each other for nearly a decade.

According to Bustle, their relationship, interestingly, began with a significant misunderstanding.

How did Christian Slater and his wife Brittany Lopez meet?

Slater met Lopez while on vacation on Little Palm Island, Florida, in 2009. At the time, the actor was 39 years old, while his wife was just 21 years old.

During a 2013 interview with Jimmy Fallon, he recalled their amusing encounter. He said he had oatmeal in a “very, very nice” location that was “known” for proposals.

He then describes how his current wife got on one knee and proposed to an older lady.

“I thought I’d just witnessed a nice lesbian engagement, so I was coming over to say congratulations,” he added. But in reality, he poorly misread the situation as Lopez was only snapping pictures of her aunt.

He pointed out, “The next thing I knew, we were hanging out in the Everglades.”

He also once admitted that his decision to give her a taxidermied raccoon as a gift rather than the live animal she requested backfired.

He described the crazy incident, saying, “She opened the item and all she saw was two dead eyes staring up at her and she literally screamed for 45 minutes into her mother’s bosom.”

Fortunately, their bond wasn’t damaged by the raccoon event. The pair dated for three years and tied the knot on December 2, 2013, in the Miami, FL courthouse. According to People, they unexpectedly decided to get married there and then, despite only planning to obtain their marriage certificate.

After about three years of marriage, they welcomed a daughter named Lena on August 16, 2019.

Who is Christain Slater’s ex-wife?

Slater’s ex-wife is Ryan Haddon, the daughter of model Dayle Haddon and Glenn Souham. Around 1998, Haddon started dating Slater and got married on February 12, 2000.

Together they have two children, a son Jaden Christopher who was born in 1999, and a daughter, Eliana Sophia, who stepped into the world in 2001.

Haddon was arrested for throwing a glass at Slater in 2003 during an argument at a Hard Rock Cafe while on vacation in Las Vegas. Slater’s neck was cut and needed 20 stitches. She was charged with domestic battery and was freed after posting a bond.

Over Christmas in 2004, they made a separation announcement. The couple officially separated in 2005 and divorced in 2007.