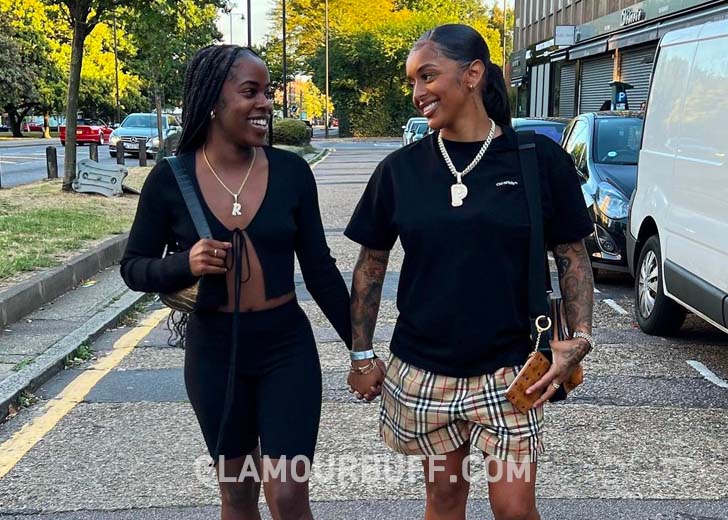 Paige Meade, best known as Paigey Cakey, is an English MC, singer, and actress from London. Cakey had a very happening dating life, and now, she is ready to settle down with her girlfriend.

She is currently dating her girlfriend, Rianna Linton. It is unknown when the pair started dating.

However, looking at their social media —  especially Instagram and YouTube, the pair are head over heels for each other. Moreover, they recently got engaged and are looking forward to the future and spending the rest of their lives together.

Here is everything we know about Cakey and her girlfriend, Linton.

As said before, it is unknown when Cakey started dating Linton. Similarly, not much is known about their relationship except the little sneak peek they give on social media.

The post is of Linton roller skating and doing tricks with it. While Cakey is not seen in the video, Linton gave camera credits to her girlfriend.

So, it is merely speculation that they might have started dating around that time or before.

Cakey and Linton always speak highly of each other on social media, making their love life #realtionshipgoals to many people. For instance, on Cakey’s birthday in January 2022, Linton threw her a massive surprise party.

The singer took to Instagram to show off her girlfriend and her efforts. Via a lengthy caption, she wrote how Linton got all of her favorite people in one place and hosted her a private birthday party.

She confessed that Linton lied to her for weeks and hid the surprise so that she could enjoy her birthday. Cakey joked that her girlfriend even convinced her to wear a jersey, which she did.

She wrote, “The maddest thing is the dress code to my party was a ‘jersey’. Somehow she persuaded me to wear a jersey and I willing wore it not knowing I was going to my own ‘surprise jersey party’.”

At last, Cakey gushed about her girlfriend, thanking her for the time and effort she took to celebrate her birthday. Cakey admitted that it was the best party anyone threw her and said, “I love you for lifeeeeee @riannalints I honestly do 💚 thank you baby!”

Looking towards ‘the future’

Cakey got engaged to her girlfriend on July 31, 2022, and she took to Instagram to announce their engagement.

She posted three pictures, two of the couple —  one of Cakey hugging her partner from behind and another one of the two looking at each other.

The third was a photo of two glasses of champagne that said, “Paige & Rianna, You’re Engaged, 2022.”

Cakey captioned the picture as “WE’RE ENGAGED 💍💚My soul mate, I love you so much!” and tagged Linton on the photos.

On September 7, 2022, Cakey posted another picture of the duo looking lovingly at one another while holding hands and walking. She wrote, “To the future 💚💍.”

It seems like the singer can’t wait to get married to her partner. At the time of writing, the couple has not announced their wedding date yet.