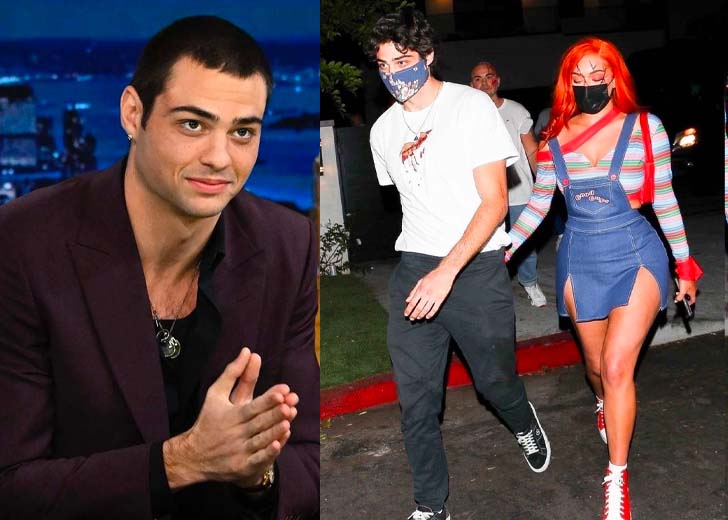 Noah Centineo became a household name and stole the hearts of many people with the help of his Netflix movie, To All the Boys I’ve Loved Before.

Since then, People have been wondering if he has someone special in his life who has stolen his heart. They have been curious about his dating life and if he has a girlfriend.

Centineo is a fairly private person who rarely shares his personal life. As a result, he has never shared if he is dating someone or has a girlfriend.

However, he has been spotted with one girl over the past two years, and it is none other than Kylie Jenner’s best friend, Anastasia Karanikolaou or Stassie Karanikolaou.

Centineo and Karanikolaou were initially linked in June 2020. It all started when they had a flirty Instagram interaction over a photo of the model wearing his red and black letterman jacket.

Later, cameras caught the new couple showing off their PDA during Halloween weekend in 2020. While Karanikolaou was costumed as a pink Power Ranger, the two left a party together, holding hands and kissing.

Centineo and Karanikolaou then continued to enjoy the Halloween nightlife with one another. A few days later, they were photographed exiting another Halloween party.

The stunning model dressed up as Chucky while the actor donned a white shirt and black pants. The pair were masked up because, during that time, COVID-19 was taking a toll on people.

According to E! News, the Black Adam star and Karanikolaou had an undeniable connection. The outlet’s source confirmed they had been dating since October 2020.

They revealed that their relationship started with them getting together as friends to film a project, but they ended up connecting and having chemistry.

Karanikolaou was also said to have introduced Centineo to all her friends, including her best friend, Jenner. E! News reported that Jenner liked their connection and felt they were “cute” together.

In October 2020, there were rumors of the pair getting married. Deuxmoi posted an anonymous message they got which said that the couple had eloped and gotten married.

The anonymous person claimed to be friends with Centineo’s sister’s boyfriend. They confirmed that the pair got married, and Centineo’s family found out about it late.

Noah Centineo’s girlfriend is Stassie Karanikolaou, and the pair have been dating since 2020. (Source: Deuxmoi’s Instagram Stories)

Deuxmoi put a disclaimer saying that the information was not confirmed and they were simply posting what they received. Later, it was confirmed to be just rumors, and the pair are not married yet.

Since then, the couple has not made headlines, but they have often been photographed together. Recently, they were spotted together in Tribeca, and it seemed like they were holding hands.

But to date, the couple themselves have not confirmed their relationship. Neither Centineo nor his girlfriend has shared an Instagram photo of the pair as well.

Before Centineo, the model was dating Bachelor Nation’s, Tyler Cameron. They were linked in 2019 when Us Weekly reported that they were hooking up and keeping things casual.

Centineo and Ren began dating in March 2019 but kept their relationship a secret until it was revealed in September 2019. They later made their first red carpet appearance in October, ahead of Halloween, at UNICEF’s Masquerade Ball.

Ren was smitten with Centineo at the time, telling Us Weekly in November 2019 that he was special and had a heart of gold, and she was grateful to be in his life and support him.

Ren told Entertainment Tonight that after her relationship with Centineo ended in early 2020, she was learning to treat herself better and saw the breakup as the world urging her to focus on herself.