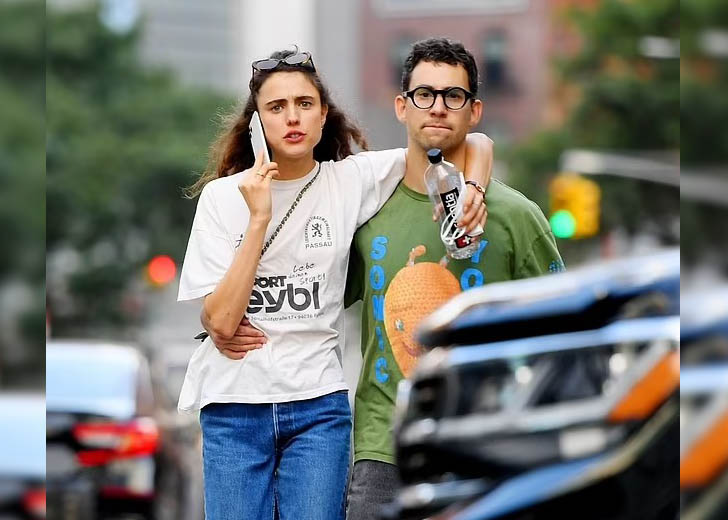 As her popularity has risen, people have been invested to know more details about her, mainly her personal life details. Well, those who want to know her present relationship status would be happy to know that she is in a relationship with the American singer Jack Antonoff.

The daughter of American actress Andie MacDowell is presently in a romantic relationship with multiple Grammy Awards winner, Jack Antonoff.

Qualley and Antonoff’s romantic relationship was first known to the public in August 2021 when they were caught taking a stroll and making out around New York City whilst holding each other’s hands.

Though neither of them has confirmed or denied their togetherness, their stroll was enough to prove it.

Most recently, on October 8, the boyfriend-girlfriend duo was once again spotted taking a walk in Tribeca, New York. During their walk, both of them wore comforting clothes — jeans and T-shirts.

Qualley was seen chatting on her phone whilst wrapping her arm over her partner’s shoulders. Meanwhile, Antonoff had kept a firm grip around his girlfriend’s waist and was even seen kissing on Qualley’s forehead.

Who Is Margaret Qualley’s Boyfriend?

Margaret Qualley’s boyfriend, Jack Antonoff, is a 37-year-old American singer, songwriter, and record producer. He is the lead singer of Bleachers, an indie-pop band, as well as a guitarist and drummer in the indie rock band named Fun.

Speaking of his accolades, he has won one Gracie Award and five Grammy Awards. In addition, he has been nominated for one Golden Globe Award, two Satellite Awards, and 11 Grammy Awards.

Thanks to his amazing talent, he has managed to gain a healthy fan following. Presently, he has more than 590,000 and 285,000 followers on his Instagram and Twitter handle, respectively.

Before she was romantically engaged with her current boyfriend, Qualley was previously involved in a number of relationships.

Starting from the first, the Kalispell, Montana native was in a relationship with the American actor and singer Nat Wolff. It is unknown when they first got together but during her 2016 interview with Vs. Magazine, Qualley mentioned visiting her partner on the sets of the 2013 movie Palo Alto.

Their relationship was made official in 2014 when they kissed each other at the red carpet event of Wolff’s 2014 movie titled The Fault in Our Stars. However, their togetherness only lasted for a couple of years as Wolff was referred to as Qualley’s ex-boyfriend in her 2017 interview with Vogue.

After her split with Wolff, Qualley was in a short-term relationship with the American comedian Pete Davidson. Their relationship was made official at the 2019 Venice Film Festival, a few months after they began dating. Sadly, the two parted ways in October 2019.

Over a year later, Qualley began dating American actor Shia LaBeouf. They first met each other in October 2020 while working together in Qualley’s sister, Rainey Qualley’s music video “Love Me Like You Hate Me.”

A month later, PDA filled pictures of the two in Los Angeles came out, making their relationship official. However, much like her previous relationships, this also didn’t work out as the duo called it quits in early January 2021.

Now, Qualley has been seeing her present boyfriend Jack Antonoff. Let’s hope things work out between them and they have a long-lasting relationship.