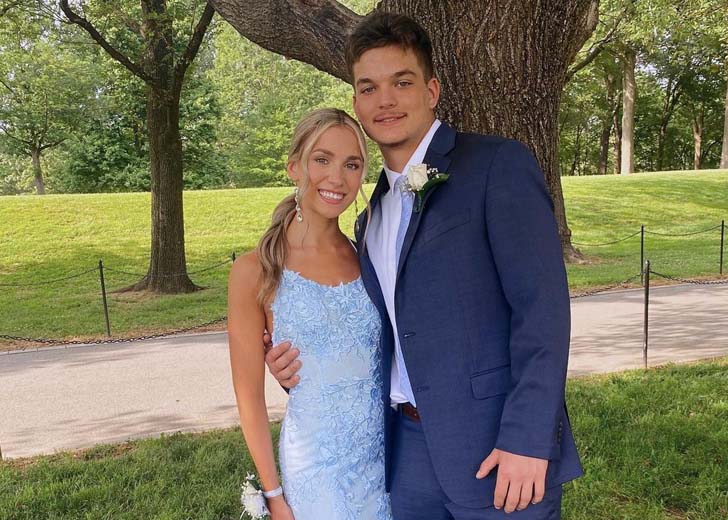 Katie Feeney is an internet personality who came into the limelight through her content on TikTok and YouTube. She usually posts dance, comedy, unboxing videos, and various other content.

On her verified TikTok handle, she has garnered over 6.7 million followers. Similarly, on her self-titled YouTube channel, she has over 1.64 million subscribers and more than 2 billion views.

As a result of her fame on those two platforms, her popularity on Instagram and Snapchat has also grown rapidly. Presently, she has over 759,000 subscribers on her Snapchat account and 649,000 followers on her Instagram handle.

Due to her ever-growing popularity, people have been curious to learn more about her – particularly if she is married to or seeing someone.

As of this writing, Feeney, age 19, is not married to a husband. There have been no reports of the TikTok star sharing the wedding vows with someone, either in private or publicly.

Although she might not be married, she is seeing someone. She is currently in a relationship with her childhood friend Sean Yamada, an American college football player.

Talking more about their relationship, they knew each other since they were kids as they were in the same preschool class. The year was 2006 and Feeney was around 4-year-old at that time.

As they grew older, they became friends. Besides, Yamada had even crashed his girlfriend’s 3rd-grade birthday party. By the time they were in 8th grade, in 2017, they had matured quite a bit and had a “thing” for each other after the summer.

In 2018, they went to high school, and in their freshman year, they officially began dating. Over the years, the couple’s togetherness has further strengthened and their love for each other has only increased.

Feeney usually shares pictures alongside her boyfriend on her social media handles, including TikTok and YouTube. For instance, on May 24, 2021, she posted a couple of pictures from the duo’s prom night in Washington D.C. The two looked super cute in those pictures.

Are Katie Feeney and Sean Still Together?

In recent times, there have been rumors suggesting that the Maryland native has parted ways with her longtime friend turned boyfriend. The talks might have risen as Feeney hasn’t shared pictures with her partner since mid-2021.

So, are the rumors true? Let’s dive in deep.

Similarly, the last time she featured her partner in her Instagram handle, on July 28, 2021, she mentioned in the caption that she is “not ready for him to leave in 2 weeks.”

Considering those two factors, it might be possible that the distance between them as well as their respective field of study doesn’t give them enough free time to meet each other physically. Nonetheless, they might be keeping in touch virtually and keeping their relationship private in the meantime.

In addition, there has been no news of the two breaking up as the rumors suggest. If they had parted ways, then Feeney would have confirmed it, or deleted all of the pictures and videos with him — which most people do when they part ways with their partner.

However, all of those pictures and videos are still available on her Instagram to handle as well as her YouTube channel.

To conclude, it cannot be said that Feeney and Yamada have broken up without either of them confirming the rumors. Until then, it’s fair to assume that they are still together.