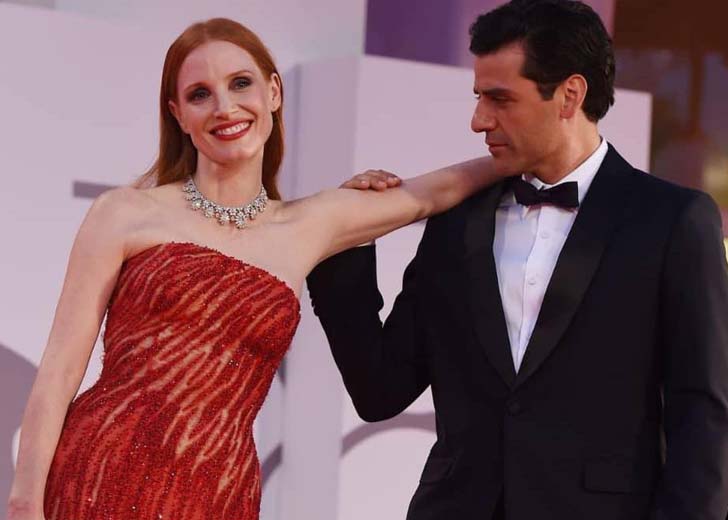 Two-time Academy Award-nominated actress Jessica Chastain has been friends with Golden Globe-winning actor Oscar Isaac since they studied together at The Juilliard School.

While everything went fine during the filming and other production processes of the show, something happened at the red carpet event of the show, held at Venice Film Festival on September 4, 2021, that created a lot of buzz and confusion.

When the two lead casts of the show walked down the red carpet together, the Guatemalan-American actor went on to kiss the American actress’s armpit or near it. His action led people to wonder what kind of relationship they have in real life.

And as the two played husband and wife in reel life, it led some to assume that Chastain and Isaac were together off-screen too and that they were married. But, are the talks true?

To clear all sorts of confusion, Chastain and Isaac are not married in real life. They are only good friends, and there is nothing more than that between them.

Now, coming over to why Chastain and Isaac created that moment, people have said that they did it purposefully. Some have theorized that they might have done it to break the stereotype of two Hollywood stars having small chemistry without being together.

And, remember that they have known each other since their acting school days, so it might just be their way of creating a fun environment.

Both Chastain and Isaac are married people who have been together with their respective partners for a while. Maybe, that’s why some people were uncomfortable with the actor kissing Chastain’s armpit.

Well, those who might have thought of that might not know that Isaac’s wife was in attendance at the red carpet event and was seeing her husband delivering a kiss on his co-star’s armpit.

There also were pictures of the actor’s wife seeing that exact moment. And interestingly, she was having a blast seeing it. One Twitter user had posted a picture of Isaac’s wife laughing and wrote that she is “an alpha, straight up.”

Now, coming over to Oscar Isaac’s marital relationship, he has been married to his Academy Award-nominated director wife Elvira Lind since March 2017. The married couple is the parents of two children; two sons named Eugene (b. 2017) and Mads (b. 2019).

The pair reportedly began dating in 2012 and kept their togetherness a secret until the next year, i.e., 2013. However, it was only in 2016 that their relationship was made official when Isaac kissed Lind on the red carpet of the 2016 Golden Globes.

From her marriage, Chastain is a mother of two: a daughter named Guilietta Chastaine Passi and a son whose name isn’t disclosed. Her daughter was born in April 2018 via surrogacy, and her son was born in 2020.

The actress is super private about her personal life and rarely shares any details. Besides, the news of her having a second baby only came out when she and her husband took a little stroll with their newborn.

Does Lupita Nyong'o Have a Husband? Inside Her Dating Life and Boyfriends