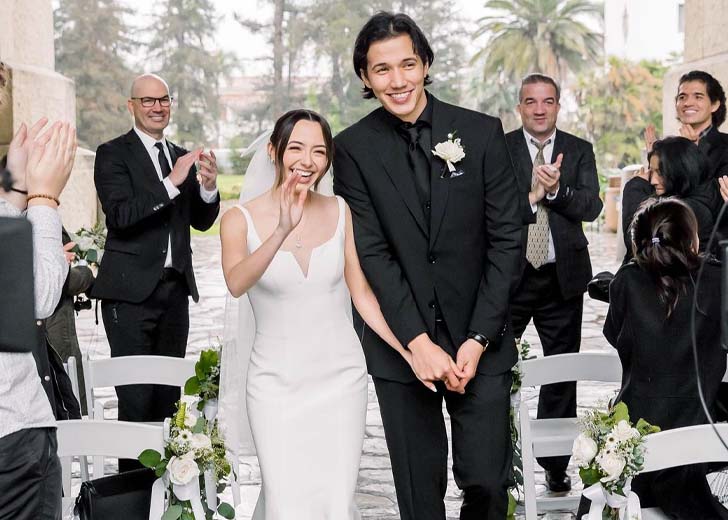 It’s been a rollercoaster of a ride for Aaron Burriss’ fans who have witnessed their favorite YouTuber announce his engagement and marriage, that too in less than a week.

The Philippines-born internet celebrity and his longtime girlfriend and fellow YouTuber, Veronica Merrell, announced their engagement via a joint Instagram post on Friday, December 31, 2021.

Although the announcement came on that day, the two officially got engaged on September 30, 2021, and had kept the news a secret. Burriss had surprised her during their hike in a garden.

Following the announcement, the shippers of the couple were very happy to learn the happy news. However, little did they know that their happiness would be doubled in less than three days.

On Saturday, January 1, 2022, Burriss took to his Instagram handle to shock everyone with his wedding news. He had shared a series of pictures with his now-wife from their lovely wedding ceremony.

“I can’t wait to spend the rest of my life with you Roni,” he captioned the post.

Just like their engagement news, the news of their wedding was also kept secret for a while and was only shared among their followers on January 1, 2022.

Burriss and Merrell actually walked down the aisle and shared the wedding vows on December 27, 2021, around three months after they got engaged. Their marriage was held at Santa Barbara Courthouse, California.

On their special day, the bride looked beautiful in a white wedding gown, and the groom donned an all-black suit accompanied by a black tie. Several close friends and family members were only invited to the wedding. The duo’s pet dog was also there as “Best Dog.”

The wedding ring for the bride was custom designed by Bez Ambar Fine Jewelry, which the store went on to give a special name, The Veronica.

While announcing their wedding on January 1, 2022, Merrell took to her Instagram handle to share some lovely snaps from that day. She wrote a long but heartfelt caption to accompany those pictures.

In the caption, she mentioned how she and her now-husband kept their love life private and hadn’t shared much of their relationship online. “Being in the spotlight, people don’t realize how much influence the internet has on your mental health, relationships, and life,” she wrote.

She further added by writing, “I’m excited for this new chapter and we will share more about our lives with you while also keeping a healthy balance of what should be public and what should be private. Thank you to everyone who’s been so supportive of our decision!”

The now-married couple first met each other on September 1, 2017, during the Playlist Convention at Washington D.C. On their very first meet, they went on to spend the whole day together and roamed around the streets of the city until 3 in the morning.

They spent the rest of the weekend together too. When they got back to Los Angeles, they went on their first official date, which was one of many dates they went on during the first four months. But they weren’t dating officially.

In December 2017, Merrell thought that Burriss would stay in North Carolina with his family until the end of the holidays, including New Year, as they had planned. However, he planned everything with her family and surprised her on New Year’s Eve.

On New Year’s Day, January 1, 2018, he asked her if she would become her girlfriend, to which she said yes, and they officially began dating from that day on. However, as they were keen on privacy, they didn’t announce their togetherness.

Neither of them gave out hints that they were dating each other despite featuring each other on their social media handles and YouTube channel. And though some had suspected they were together; the duo didn’t confirm anything.

Finally, after being in a relationship for almost four years and knowing each other for more than that, on December 29, 2021, Burriss uploaded a YouTube video, where he acknowledged his relationship with Merrell and made things official to the public.

On the same day, the two also shared a series of pictures through a joint Instagram post and captioned it, writing, “These past 4 years have been amazing with you!”

After making their relationship public, they also announced that they got engaged and married. Going by all those, it seems they are made for each other. We wish the couple nothing but the best.

Top Celebrity Inspired Accessories for 2022: Everything You Need to Know