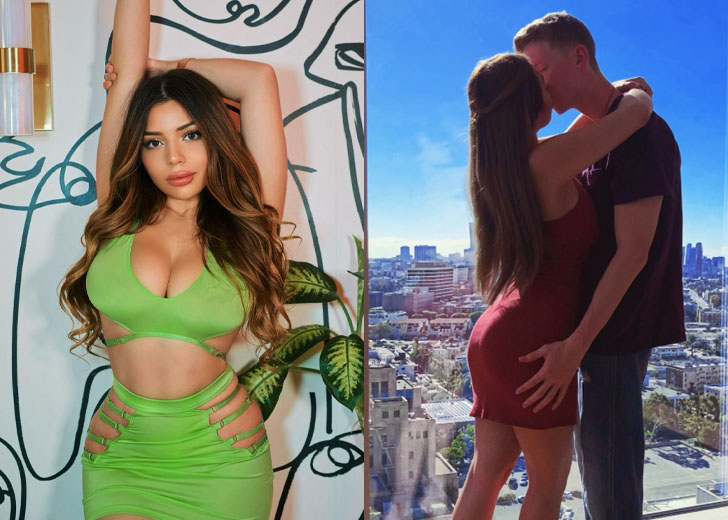 Katiana Kay is a renowned social media personality, and a bikini model who has amassed a huge number of fan following on her TikTok and Instagram handles – 4.6 million and 766,000 followers, respectively.

Due to her ever-growing popularity, she has been the talk of the town among her followers, who want to learn more about her. Among several things that her fans are interested to know about her, one is her personal life.

Does Katiana Kay have a boyfriend?

Sorry boys, it seems like Kay is already taken! The TikTok star has been in a longtime relationship with her boyfriend William James Goodall, aka Will.

After glancing at Goodall’s Instagram handle, it has been found out that he and Kay have been together for over three years – he first featured her on his Instagram handle on November 8, 2018.

However, as the exact timeframe of their relationship is currently unknown, the couple might be together for an even longer period.

The love birds are not only a couple but also young entrepreneurs and business partners. Together, they are the leading minds behind their successful hemp product company called Bay Smokes and nutraceuticals company called Aw Natural.

As per reports, the power couple uses their presence on different social media platforms to market and support their companies’ products.

Coming back to the couple, they prefer to keep their relationship details private. Perhaps that’s why Kay is yet to feature her boyfriend on her Instagram handle, and Goodall has stopped featuring his girlfriend since June 2019.

While Kay might not feature her partner on her Instagram handle, she often makes TikTok videos with him and shares them via her TikTok handle. On February 14, 2022, she posted a video with him on the occasion of his birthday. “Happy Birthday King” was written on the video as she leaned forward and kissed him.

Additionally, they occasionally make public appearances. For instance, the couple walked side-by-side while making an appearance at the third Annual Daytime Beauty Awards at Taglyan Complex in Los Angeles in September 2021.

Going by all that, it seems like the couple have been relishing each other’s togetherness and support to build a strong relationship and have been quite successful in doing that.

Fans believe Katiana Kay was abused by her boyfriend

On January 10, 2022, Kay posted a TikTok in which she cleared all the rumors of her age and revealed her exact age, which is 19 [she is 20 years of age as of this writing]. While she might have cleared one gossip, it led to the birth of another.

Some of her devoted fans noticed bruises on her thighs at the end of the video. And as concerned fans, they took to the comment section to express their concerns. They asked how she got the bruises and if she was being abused.

Similarly, while some asked her to be more careful, some were quite paranoid and thought she wanted people to see those bruises. On the other hand, some thought she asked for help by giving subtle hints.

In the end, some of those concerned fans jumped to the conclusion that her longtime boyfriend might be abusing her. And it was just the start to all the TikTok conspiracies that followed afterward.

On January 11, Kay posted another video, this time on her spam TikTok account, in which she showed that her calf muscles had twitches. Like the last time, concerned fans noticed more bruises and marks on her calf.

As things began to unfold, fans came across a TikTok handle under the username @katiana.kay.help that pointed out that Kay had sent a help signal even before fans first noticed her bruises.

The account had posted a video on January 7, 2022, and pointed out everything that Kay was asking for help. The video in question was a screen recording of Kay’s two consecutive TikTok posts with a voiceover.

The first TikTok video shown in the video focused on the comment section in which fans had asked her to post a TikTok video on her own voice and wear blue-colored clothes in it if she required help.

Surprisingly, Kay did those two things, leading her fans to raise their suspicions even more. But that’s not the end, as other fans’ accounts have pointed out that she had sent signals of help multiple times on previous occasions too.

In addition to all that, fans have believed that her boyfriend makes her wear tight clothes that she occasionally doesn’t fit into and many more things.

However, all of these speculations don’t have any concrete evidence.

As of this writing, Kay hasn’t come forward and spoken on these matters. But, she has cleared some gossip in the past.

In November 2021, she cleared the talks of her looking scared on her now-deleted TikTok skit. She mentioned that she looked frightened due to her past trauma. As she went on, she talked about her jaw condition that has affected her facial expression.

She also stated that she feels insecure due to her teeth, making her look unusual while talking.

On another occasion, she talked about her dressing choices and wearing tight clothes that usually don’t fit her body. She mentioned that she has a weird relationship with her body and dressing the way she does helps her feel good.

Nonetheless, it seems like that doesn’t happen often. Besides, it seemed like a little game between the couple, as Kay mentioned in the caption that her partner occasionally wears skirts for her. At the end of the video, they shared a kiss.