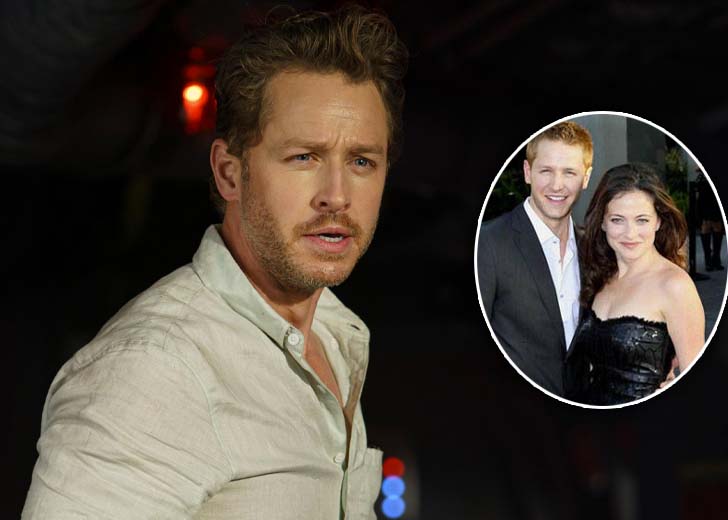 Looking at Josh Dallas and his wife, Ginnifer Goodwin, with their two children, they look like a picture-perfect family.

However, Goodwin is not Dallas’ first wife. Instead, she is his second wife, who he met while he was in a relationship with his first wife, Lara Pulver.

Dallas and Pulver were together for almost a decade before parting ways. While it is sad that their relationship ended, the stars found love in other people and relationships.

Dallas went on to marry his current wife, Goodwin, and Pulver is married to her second husband,  Raza Jaffrey, with whom she shares two children.

That being said, here is everything we know about Dallas and his first wife’s relationship.

Dallas and Pulver first met in 2003. Dallas was studying at the Mountview Academy of Theatre Arts in the UK.

The pair met at Theatre Royal, Windsor, on The Boy Friend. Soon, they started dating and fell in love.

They decided to take their relationship to the next level when they married over Christmas in 2007. They had a beautiful ceremony in Devon which was followed by a lavish honeymoon in the Maldives.

For Pulver, one of the happiest days of her life was during her wedding weekend. She told Fabulous that her ultimate happy occasion was tying the knot with her Dallas.

Two years after their marriage, Dallas moved to LA with his first wife. Pulver told The Independent how the move benefitted her professionally but not personally.

In 2011, Pulver confirmed her divorce from Dallas in an interview on Bob Rivers’s radio show. She admitted that time she was heartbroken and was at her all-time low.

She said, “I didn’t know where I lived, I didn’t have a job, and I didn’t have my partner in crime, with whom I so wanted to share this moment.”

However, she decided to collect herself and decided to take control of her life. So, even though parting ways with her husband was one of the most painful times in her life, she was grateful for it.

It is unknown why the pair decided to separate. However, there are rumors that Dallas cheated on his first wife with Goodwin.

During the time, both Dallas and Goodwin were starring in Once Upon a Time as Prince Charming and Snow White, respectively. Soon after the news about Dallas’ separation from his first wife was out, the actor revealed that he was in a relationship with Goodwin.

Many connected the dots and presumed that Dallas and Goodwin had an affair. However, until the pair confirms it, nothing can be said for sure.

Lara Pulver with her current husband

Like Dallas, Pulver also moved on and found love in her current husband, Jaffrey.  When Pulver and Jaffrey first met in 2008, they were both married to other people.

In 2007, Jaffrey married Spooks co-star Miranda Raison shortly after leaving the show. Despite seeming to be a very happy pair on red carpets, their marriage ended in divorce in 2009.

The actor admitted that he had a crush on Pulver when he met her. But nothing occurred between them until they divorced their respective partners.

The duo began dating a year after Pulver’s divorce from her husband. She told the Daily Mail in April 2012 that she was dating Jaffrey and was happy with him.

“We’ve known each other for three-and-a-half years, but got together just over three months ago,” she explained.

Two years later, Jaffrey revealed the pair’s intention to get married to the Evening Standard in November 2014. He admitted that they were getting married soon, and as he said, the couple tied the knot on December 27, 2014.

The duo was blessed with their first child, a son named Ozias, in February 2017. Three years later, Pulver revealed that she was pregnant on September 2, 2020.

The same year, they welcomed their baby girl Thea. Currently, Pulver lives in Los Angeles with her husband and children.