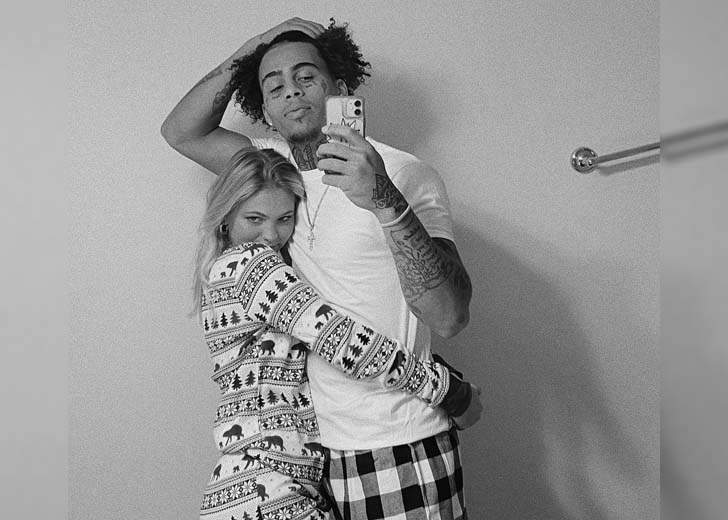 Jordyn Jones seems to have found a boyfriend over four months after mentioning she was single.

The American actress has been in a romantic relationship with Kamrin Houser for a little over a month now, after meeting each other in Chicago at the Lyrical Lemonade Summer Smash in August 2021.

Jones’ new boyfriend first teased his relationship with her on December 3, 2021, when he shared a series of black and white pictures with her. In those pictures, he was in his normal outfit, whereas Jones was wearing Christmas-themed PJs.

Nine days later, on December 12, both of them posted separate pictures of themselves only; however, the surrounding of the pictures and location tag on their post gave it away that they were there together — at Big Bear Lake, California.

After sharing those pictures, they went on to drop a comment on each other’s posts. Jones had written “u look so happy,” to which Houser had replied, “every reason to be.” On the other hand, on Jones’ post, Houser had commented, “She’s cold.”

On December 17, Jones basically confirmed her relationship with Houser when she hosted him in her podcast What They Don’t Tell You. In it, she mentioned that they started as friends, Houser made the first move, and they eventually began dating.

Their togetherness was seen recently on Jones’ TikTok video in which the couple shared a cute moment and in Jones’ podcast when she again invited over her partner. In his second time on the podcast, he was asked relationship questions like: “How do you ask a guy out?” “How do you know if he loves you?” “Why do they leave and come back?” and others.

Going by all of that, it seems like the two have started their relationship quite well, and their fans will see more of them in the future.

Who Is Jordyn Jones’ New Boyfriend?

Houser is a rising American rapper who first tasted the limelight through his song “The Vibe.” He is also well known by his rap name, HeartBreak Kid.

Born in 1999 in Waynesboro, Pennsylvania, he celebrates his birthday on June 24 every year. He is 22 years of age. His zodiac sign is Cancer.

As for his parents, only his mother’s name is known, which is Shelby Foose. Presently, the details on his father are not disclosed.

Coming over to his siblings, reports suggest that he is the brother of rapper Kimetrius Foose, commonly known as Lil Skies, with whom Houser has done several tours.

Before being in a relationship with Hauser, Jones was in a couple of relationships in the past.

In 2015, she was in a private relationship with a man whose name is not disclosed. Jones herself mentioned it during her appearance in The Zach Sang Show in January 2019.

Her first known relationship was with the Instagram star Brandon Westenberg. They began dating each other in 2016 and parted ways two years later in 2018. “Super busy schedules” was cited as the reason behind their split.

Shortly, Jones met YouTuber Jordan Beau through mutual friends. They sparked feelings and started dating each other in 2018. While they were together, they had even created a YouTube channel, sharing the couple moments they had.

Everything seemed sorted out between the two, and no one had the idea of their break up. Just one month before their third dating anniversary, on July 23, 2021, she announced her split with Jordan via Instagram.

In the caption, she mentioned that it was her decision and Jordan did “absolutely nothing wrong.” Citing her reason, she wrote, “it’s just time for me to be alone and put myself first. I’m heartbroken. But for now, we both need some time to heal our broken hearts.”

Months after that split, she formed a relationship with her now-boyfriend.