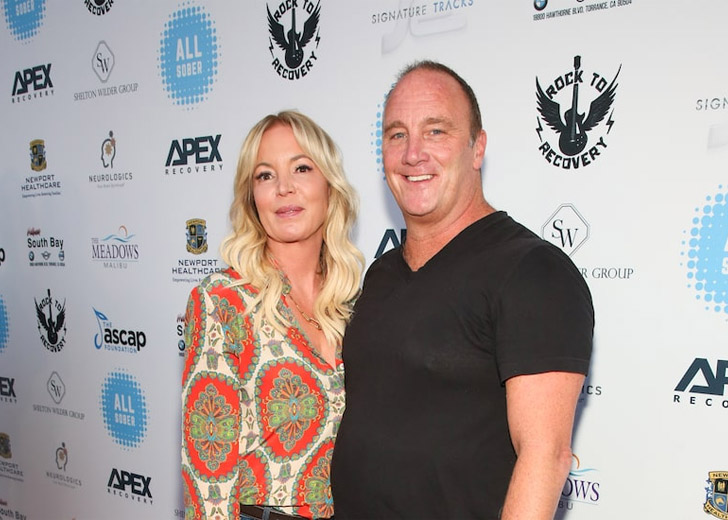 He is engaged to the owner of the Los Angeles Lakers, Jeanie Buss. The pair did not explicitly announce their engagement, but TMZ reported it.

According to the tabloid, the pair have been together since 2017. They bonded over sports and comedy and soon started dating each other.

Finally, the duo took their relationship to the next level. It is unknown when Mohr proposed to his soon-to-be wife, but Buss had recently been spotted wearing a ring.

Then, sources close to Mohr and Buss confirmed that the pair had been engaged. The two are relatively private about their relationship, but sometimes, they give a glimpse of their love life on social media.

However, they have never shared details about it. So, it is unknown when the pair started dating, when they got engaged and when they will get married.

Jay Mohr and his ex-wife

Mohr had two wives before getting engaged to Buss. His first wife was Nicole Chamberlain, and the pair were married from 1998 to 2004.

They share a son named Jackson. Mohr’s second wife was Nikki Cox, who he met after making a guest appearance in Las Vegas in 2004.

Before Mohr, Cox was engaged to another comedian, Bobcat Goldthwait. Mohr and Cox soon started dating, and after a little over a year, they got engaged on December 29, 2006.

Five years later, on May 5, 2011, the couple welcomed their son, Meredith Daniel. Even though Meredith is traditionally a girl’s name, Daniel was named as such after his maternal grandmother.

While Mohr and Cox seemed happy in the initial phase of their marriage, their relationship did not last long. The comedian filed for divorce in July 2016, citing prevalent, irreconcilable differences.

But soon, he had a change of heart and hence withdrew the divorce. He stated that he was still married to his wife, and they were in love.

But in less than a year, he filed for divorce for the second time on December 13, 2016. This time, he cited Cox’s drug abuse as the grounds for divorce.

He asked for the sole custody of their son, stating his wife was not stable to look after him. The divorce was finalized in 2018, but the terms of it have not been revealed.

It is reported that Mohr started dating Buss while going through the divorce proceedings with his former wife.

Like her current partner, Buss was also in two serious relationships. She was married to volleyball player Steve Timmons in 1990.

It is reported that Buss and Timmons met in the late 80s and married after dating for a year. Unfortunately, the marriage lasted for only three years and ended in a divorce.

Buss confessed that she never put her marriage first. She always prioritized business over her relationship and hence, parted ways with her first husband.

In 1999, Buss started dating Lakers’ coach, Phil Jackson. The pair were a power couple in the basketball industry since Buss owned the Lakers and Jackson trained them.

The pair were engaged to be married, but their relationship did not last. As a result, they parted ways after being together for 17 years and engaged for four.

Jackson said, “professional obligations and the geographic distance” were the reason for their split. Buss, on the other hand, blamed her brother.

She told espnW (via Bleacher Report), “He and I worked well together. During that time, the 12 or so years that he coached the Lakers, I really got into the role of team mom, being the coach’s wife. I got to see another side of basketball that I hadn’t seen—that what Phil tries to create is a family.”

Unfortunately, her brother Jim decided not to hire Jackson for the Lakers. Jim made such a decision because Jackson took the role of president of basketball operations with the New York Knicks.

Buss said, “One way or the other, it was going to cost us our relationship.”

But as the saying goes, “Everything happens for a reason,” this split was a silver lining for Buss because she is now engaged to Mohr and will soon be the comedian’s wife.

Michael Angarano Once Dated Kristen Stewart — Who Is His Girlfriend Now?