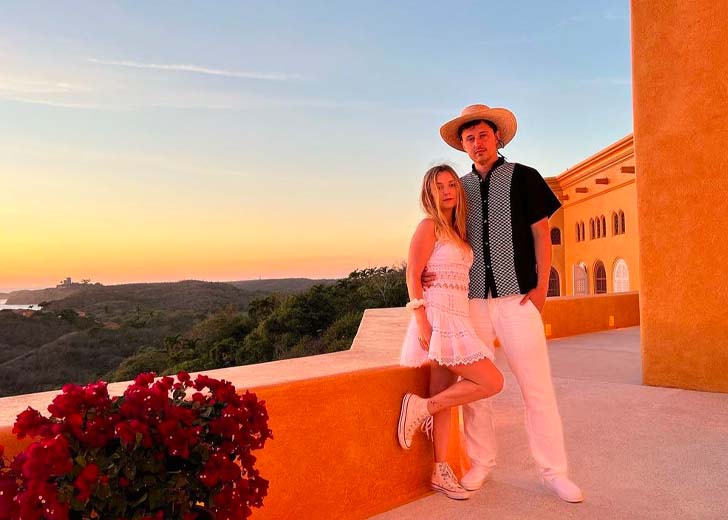 The pair confirmed their relationship after taking a Norway trip to see the Northern Lights.

Billie Lourd’s relationship with her husband, Austen Rydell, is one of a kind.

Before their relationship blossomed into marriage, Lourd and Rydell had known each other for years —  with Instagram photos dating back to 2013. They started dating in 2016, had one breakup before reconnecting, and now are married, have a son, and are expecting a second child.

2016 and 2017 were difficult years for Lourd since she lost her mother, Star Wars actress Carrie Fisher, and her grandmother simultaneously. However, Rydell was there to provide her with support and love.

Lourd and Rydell’s wedding was also exceptional, with the latter incorporating the American Horror Story star’s family into the engagement ring, wedding dress, and the wedding as a whole.

Billie Lourd and husband Austen Rydell before the wedding

As said before, Lourd and Rydell began dating in 2016 after years of friendship. Their romance, however, was short-lived, as Lourd began dating her Scream Queens co-star, Taylor Lautner, later that year.

Unfortunately, the relationship only lasted for eight months. PEOPLE reported in July 2017 that Lourd and her boyfriend, Lautner, had split.

It was reported that they were no longer together but still friendly. The reason for their breakup was Lourd’s focus on her work.

However, after a couple of months, Lourd reconnected with Rydell. They were spotted kissing outside a hotel in Palm Springs in October 2017, fueling rumors that they had rekindled their romance.

The pair confirmed their relationship after taking a Norway trip to see the Northern Lights. They went there so that Lourd could honor her mother on the occasion of Fisher’s death anniversary.

They made their first public appearance as a couple in May 2018 at a Christian Dior fashion show. Their red carpet debut as a couple was in November 2018 when they attended the LACMA Art + Film Gala.

Besides posting a couple of pictures on social media, the duo kept their dating life out of social media and the public eye.

Rydell was the one who announced that the pair were engaged. He told the happy news on Instagram on June 26, 2020, writing that saying yes to his proposal was a no-brainer for Lourd.

It is reported that the engagement ring was the same one that Lourd’s father, Bryan, proposed to Fisher.

Lourd and Rydell quietly welcomed their first child together, a baby boy named Kingston Fisher Lourd Rydell, a few months after announcing their engagement. Lourd revealed the news on Instagram in September 2020, alongside a photo of his tiny feet.

Lourd and Rydell listed their Los Angeles home after three years living just off Melrose Boulevard on July 20, 2021. The home went on the market months after it was revealed that Lourd had begun renovating two adjoining properties previously owned by her late mother and grandmother.

As a result, she created an $18 million estate where she planned to continue to grow her family with Rydell. Lourd’s bachelorette party took place almost two years after their engagement, in February 2022.

The actress shared a series of photos on Instagram, including one in which she was wearing white leisure set with feather trim, red heart-shaped sunglasses, and white Minnie Mouse-themed bridal headwear.

On March 12, 2022, one month after her bachelorette party, Lourd and Rydell married in Cabo San Lucas, Mexico. Lourd later shared photos from her wedding, including shots of her wedding dress, which was designed in memory of her late mother.

Lourd shared the details of her wedding, wedding dress, and engagement ring with Vogue. Ticket to Paradise star first met Rodarte’s designers, Kate and Laura Mulleavy, after interviewing her late mother in 2014.

She met with the Rodarte design team at the brand’s downtown Los Angeles studio, where they began work on her dream gown. Her René Mancini shoes were also reminiscent of Fisher.

Her father, Bryan, chose them because “they reminded him of the shoes my mom used to wear in the ’90s.” Her bridal jewelry conveyed the same message.

The couple went on their honeymoon in April 2022. Lourd posted cozy sunset photos of the couple hugging and kissing on Instagram, with rolling hills and rippling water in the background.

The two are leading a very happy married life at the moment. Their family of three is soon changing to a family of four since they are expecting a baby.

They revealed their pregnancy when the actress showed off her baby bump at the world premiere of Ticket To Paradise in London, England.