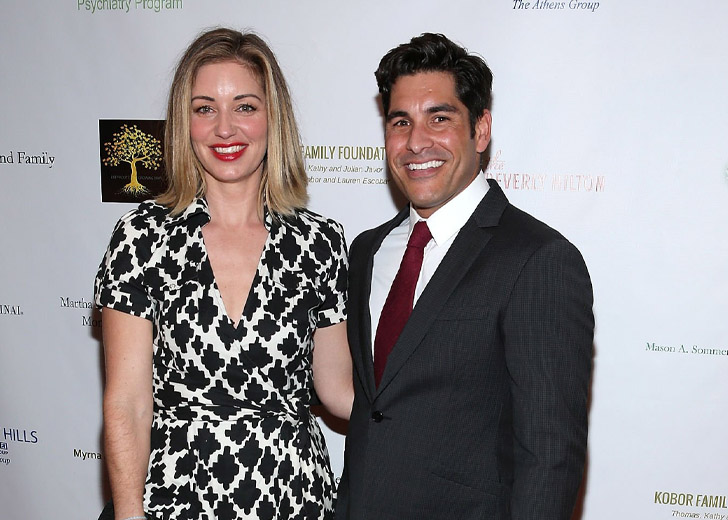 Bianca Kajlich and Mike Catherwood have been married for nearly ten years.

Bianca Kajlich, an American actress, achieved fame in the entertainment industry three years after she made her acting debut. She started out by playing the supporting characters in movies and shows.

Her popularity grew after she starred as Sara Moyer in the horror flick Halloween: Resurrection. She then earned the part of Jennifer Morgan in the comedy Rules of Engagement, which further brought her into the limelight.

Since then, she has appeared in movies and TV shows like Dark Was the Night, Undateable, Bosch, and Legacies. Similarly, she recently portrayed the role of Millie Winchester in the show The Winchesters. But what of her personal life? Here’s a look into it!

Kajlich is currently married to her longtime husband, Mike Catherwood. They first met in 2010 when the actress appeared on her now-husband’s show Loveline. After their first meeting, they developed a good bond, which eventually turned into a romantic relationship.

Around two years after their first meet, on December 16, 2012, the love birds walked down the aisle. The groom looked elegant in a classic black tux, and his wife chose a jacket dress to accommodate the cold weekend weather.

And less than two years after being married, the couple welcomed their first child, Magnolia Catherwood, on April 14, 2014. Since then, they have done their best to raise their daughter and give her the best in everything.

Currently, Kajlich and Catherwood have been married for more than nine years, and their relationship has gotten stronger as time passes by. However, neither of them was sure about getting old together when they first began dating.

While sending birthday wishes to her husband on March 15, 2022, the actress gave some insight into their relationship. She wrote, “At the beginning of our relationship, I said, ‘let’s grow old together,’ and he laughed it off – not because he didn’t want to.”

“But because neither of us loved ourselves enough to really believe anyone else would either. But everyone deserves a redemption story, and no one who takes a good long look within their heart leaves empty-handed. So here we are, growing older together each year.”

“I don’t know a better human being than @mikecatherwood. I can’t think of another soul I’d rather be in cahoots with as we take the road less traveled. So happy you were born, my love, and so grateful for every day I get to love you more. Happy Birthday,” she concluded her caption.

Who is Bianca Kajlich’s husband?

He also co-hosted Dr. Drew Midday Live with Mike Catherwood’s show on KABC radio and was the anchor of the Discovery Channel reality show American Chopper and the NBC game show Chain Reaction. Similarly, he has been on television shows such as Undateable and Dancing With the Stars.

Born in 1979 in San Marino, California, Catherwood is currently 43 years of age. The Rutgers University graduate celebrates his birthday every year on March 15. Furthermore, he is the son of Dwight Catherwood and Rachel Catherwood.

Before marrying Kajlich, the radio personality was already a married man whose marital relationship ended in a divorce, according to Toofab. But the information and whereabouts of his ex-wife are unknown.

Before Kajlich shared the wedding vows with her present husband, she was married to soccer star Landon Donovan. Per PEOPLE, the now-former couple tied the knot on New Year’s Eve, December 31, 2006, at the Bacara Resort in Santa Barbara, California.

Speaking of her wedding, the actress told People, “Words couldn’t possibly do the night justice. It really is best remembered in our hearts.”

However, it seems the two weren’t meant to stay together forever as news of their separation was made public in July 2009 — it was said that they were already separated for months. But their official divorce papers said otherwise.

As per their divorce papers, obtained by TMZ, Kajlich and Donovan separated on October 31, 2009, and the divorce papers were filed on December 21, 2010. Later, their split was finalized.

Does Demetria McKinney Have a Husband or a Boyfriend? Inside Her Dating Life