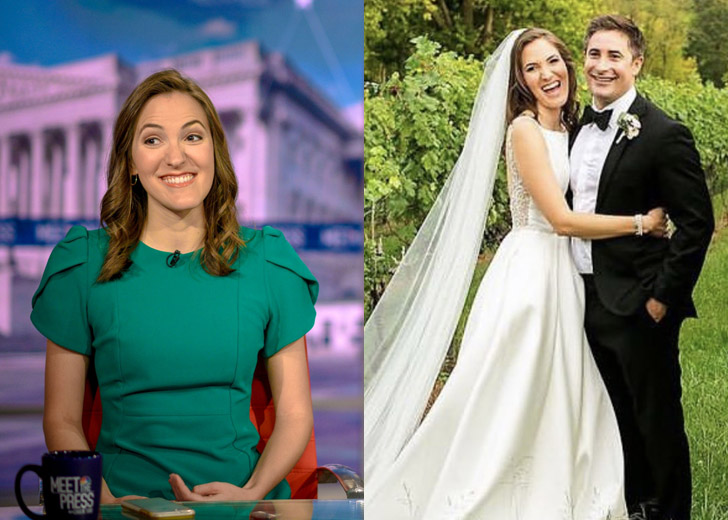 Betsy Woodruff is an experienced American journalist who is presently working as a reporter at Politico, where she covers national security and federal law enforcement. She has been working there since March of 2020.

Before that, she was working for a long time at The Daily Beast as a political reporter, covering federal law enforcement, from 2015 to 2020. In addition, she has served as a contributor to MSNBC and appeared on CNN and Fox News.

Going by that, it seems like her professional life is flourished with success, and the same could be said for her personal life too. Woodruff has been married to her longtime boyfriend, Jonathan Swan, a fellow reporter from Australia.

Woodruff and Swan have been living a blissful marital life ever since they got married back in late 2019.

The married couple’s relationship goes way back to 2014 when they first started dating each other. It seems like their similar profession led them to each other, though it’s unknown when and where they first met.

After dating each other for four years, they decided it was time to take a further step in their relationship. On March 11, 2018, Woodruff and Swan exchanged rings and got engaged.

After being engaged for more than a year, in September 2019, they walked down the aisle to share the wedding vows amongst close friends and family members.

Since their marriage, the duo has been relishing several happy moments as well as holding each other during sad moments. The two occasionally have family time on Friday nights, when Woodruff makes Shabbat dinner.

And, although she is not Jewish, — her husband is — she has excelled on making challah for the occasion, over time. During his interview with Jewish Insider in November 2020, Swan talked about the topic and said, “She’s very good at it. We love doing Shabbat dinner.”

Furthermore, the couple is quite private about their relationship and doesn’t share much with the public. Nonetheless, it can be assumed that they have bonded well ever since they formed a relationship.

Woodruff and Swan Are Parents to One

Not only Woodruff and Swan have been a married couple for over two years, but they are also parents to a one-year-old child, a daughter named Esther Jane Swan.

The journalist announced the birth of her daughter via a Twitter post on September 9, 2020. She had posted a cute picture of her baby girl and captioned it writing, “A big hello to everyone from our brand new baby, Esther Jane Swan.”

After the birth of their child, the new parents took some time off their work. In Swan’s above-mentioned interview, he stated, “I took a couple of weeks — ish,” referring to the parental leave he took.

Additionally, he mentioned, “It was hard to have a baby probably anytime, I imagined, but this year was challenging.” He then credited his wife for being amazing and talked about how his family wasn’t there during the birth of his daughter due to the pandemic.

His words were, “But my wife, Betsy, is amazing, and I think one of the hard things has been my family hasn’t been able to come out for their first grandchild. They’re all back in Australia.”