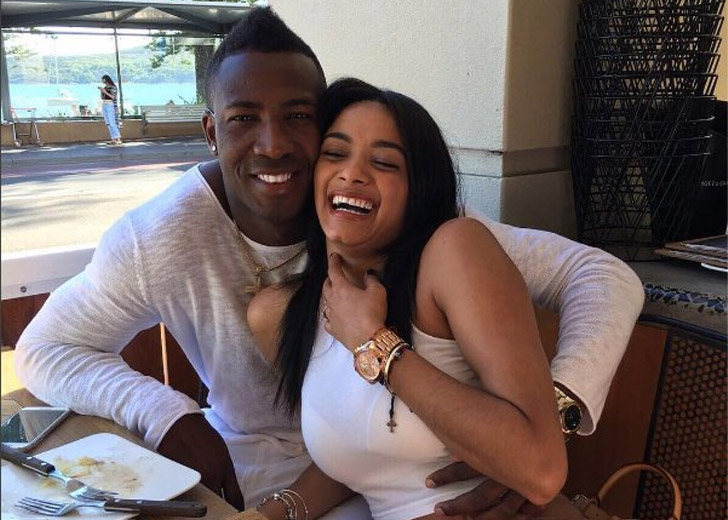 Andre Russell is a professional cricket player from Jamaica who plays for the West Indies national team and the Kolkata Knight Riders in the Indian Premier League.

He is known for his all-around abilities, solid batting, bowling, athleticism, and fielding skills.

When talking about his personal life, Russell, born on April 29, 1988, was married to Jassym Lora. They have a daughter together. Scroll to learn further about them.

Russell and Lora had been in a relationship for several years. They got engaged in 2014 and eventually hitched in an intimate ceremony in 2016.

Andre Russell and his Wife, Jassym Lora, during her pregnancy (Image Source: The Statesmen)

Lora, born in Miami, Florida, is a professional model by career and also a fashion influencer. We could catch her various bold photoshoots on Instagram representing multiple brands.

Lora seems to be an ardent cricket fan and could often be witnessed in the cricket stadium supporting her husband.

After three years of marriage, they were blessed with a baby girl. Russell had made a beautiful post on his Instagram, welcoming his girl, Amaiah S Russell, with a photo of him holding his daughter’s tiny hand.

In the caption, he wrote, “Another #blessing welcoming Amaiah S Russell to the world! God is good all the time. Thank god for my strong Queen @jassymloraro #daddysbabygirl,” where he also offered gratitude towards his wife.

The family members were apart during the COVID pandemic. Lora and newborn Amaiah were both in Miami, in the United States, when travel restrictions were enforced, while Russell was in his homeland, Jamaica. He wished to have them with him.

“She [his daughter] and Jassym, they are both in Miami. I stay connected to them and talk to them. I wish I could have them here, but with all these travel restrictions, we cannot do anything,” Russell expressed his grief to Sanjana Ganeshan in an Interview.

Russell and Lora were so much into each other that they used to keep on posting their intimate photos on Instagram story. One of their cozy videos was even viral on social media.

Things seem to be different now; there is no single picture of Lora on the 34-year-old cricketer’s Instagram account, while the past profile used to be filled with a couple’s romantic photos and videos. Most probably, Russells archived or deleted his photos with Lora, and even Amaiah’s photos were not there.

His profile consists of his own photos, most of which are photos at the stadium. Among 295 of his Instagram photos at this date, none had Lora.

Something similar can be seen in Lora’s Instagram too. The model shared her bikini pictures and also the picture with her daughter.

The 33 years old Instagram influencer had posted a photo of her carrying her daughter in New York City with the caption, “Me and my baby, we gon’ be alright #NewYorkStateofMind.”

Among all her Instagram photos, none of them belonged with an all-rounder; even past ones were not present in the gram.

Although both still follow each other on Instagram, fans speculate about their split. Moreover, Lora, who used to come to cheer on her husband during the IPL usually, has not been seen in the IPL in recent seasons.

Official news regarding their relationship is yet to come, and we hope it will favor all three family members.