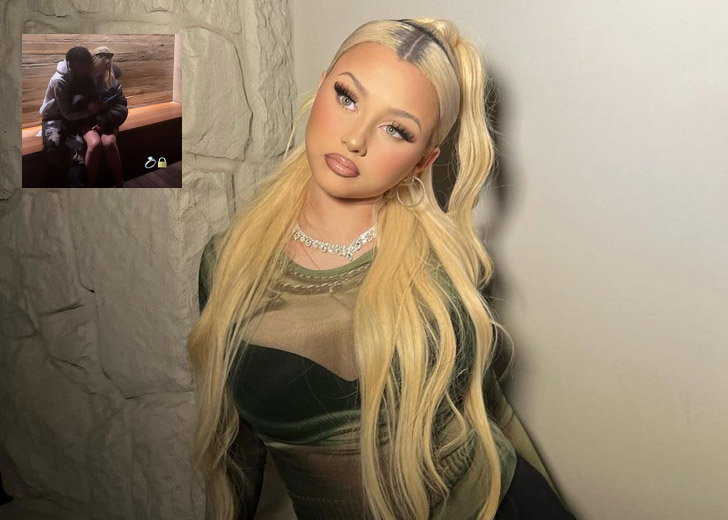 Alabama Luella Barker, the daughter of Travis Barker, was spotted dancing on TikTok with a man who is believed to be her boyfriend.

The 17-year-old has experience in the spotlight and is a self-starter in social media. With 1.6 million followers and a verified account, she attracts a lot of attention with each post she releases.

Many people are interested in learning more about Travis’ family, notably his daughter Alabama, as The Kardashians on Hulu recently premiered. Fans want to know her dating status and who exactly her boyfriend is.

Travis’ daughter Alabama has drawn much more attention since The Kardashians debuted. When she shared multiple clips with her male acquaintances, she typically noted in the comments that they were just friends.

However, in a recent TikTok dated February 2022, Alabama appeared to be more than simply friends and having a romantic relationship with the guy on the video.

Fans had a lot to say when she posted a video with a guy on TikTok because of how frequently her presence on the platform is discussed.

A fan noted, “I’m not mad I am just jealous he gets to be so close to you.”

Another comment read, “I don’t care how many times they break up, they belong together.”

Although unconfirmed, the guy in the video and rumored to be Alabama’s boyfriend goes by the handle @girlzluhdev on TikTok. In his bio, he calls himself the “chilli monster,” and he has 137.1K followers on the platform.

Previously, Alabama also hinted that she has a boyfriend. She and the mystery male were pictured sitting on a bench together during a dinner date at Nobu, his arms around her.

Alabama and her reported boyfriend were hunched over and hid their faces in the picture. She also used a padlock and a diamond ring emojis in the post.

The blonde beauty has previously posted similarly hazy pictures of her boyfriend, but she has never revealed his face or included him in any of the photos.

In addition to the snapshot from Nobu, Alabama’s luxurious manicure from May 26, 2022, is the biggest hint fans have regarding her beau.

The A-lister showed off a white M initial on the tip of her middle finger on her right hand, which she claimed was her boyfriend’s initial.

Who is Alabama Luella Barker?

Alabama is one of the two children of Travis and Shanna Moakler. According to her IMDb profile, she was born on December 24, 2005. After her father married Kourtney Kardashian, she became close to the Kardashian family.

She is the younger sister of Landon, the other child Travis and Moakler have together. She also has a half-sibling, Atiana De La Moya, who her mother shares with her ex-husband Oscar De La Hoya.

Alabama is an influencer, social media personality, and reality star known for her work in Meet the Barkers, Kids React, Teens Wanna Know, and The Kardashians.

Is Rhona Mitra Married to a Husband? Inside Her Dating Life and Relationships