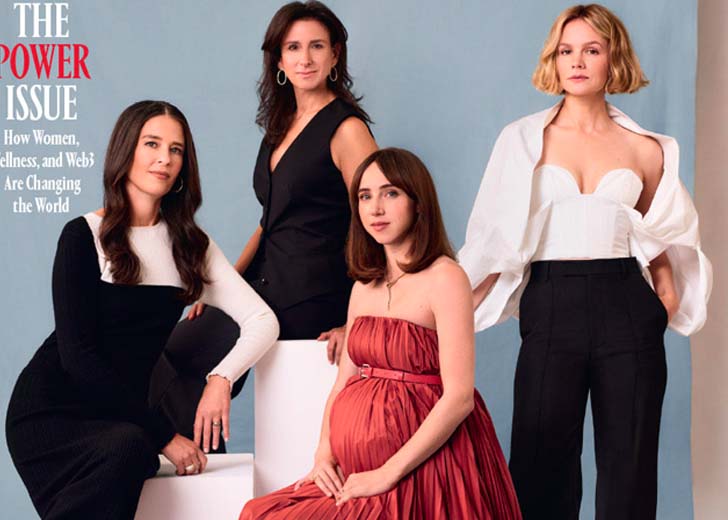 The actress showed her bump on the cover of Marie Claire’s Power Issue.

The Ruby Sparks actress showed off her baby bump on the cover of Marie Claire‘s new issue, which also highlighted Kazan’s new film, She Said.

The diva posed in a red strapless gown by Max Mara in the cover image alongside costar Carey Mulligan and journalists Megan Twohey and Jodi Kantor, who wrote the book on which the movie is based.

In additional photos published online on Thursday, November 10, Kazan cradled her stomach in glamorous gowns by Erdem and Dior. A rep for the Big Sick star could not be reached, while a spokesperson for Dano, 38, had no comment.

The Clickbait alum and the Little Miss Sunshine actor have been dating since 2007. The duo has worked together several times over the years, costarring in 2012’s Ruby Sparks, which Kazan also wrote, and co-writing the screenplay for Dano’s 2018 directorial debut, Wildlife.

The couple welcomed their first child, daughter Alma, in 2018. Dano confirmed the little one’s arrival during an October 2018 appearance on The Tonight Show Starring Jimmy Fallon.

“I’m so tired and I’m so in love,” the There Will Be Blood actor said of fatherhood at the time. “It’s so extreme. Your heart has gone, like, supernova in one sense. And then we landed from London last week and she cried for, like, 24 straight hours, and you kind of just want to walk through a wall. It’s crazy.”

Kazan didn’t discuss her pregnancy with Marie Claire, but she opened up about why She Said’s “scenes of motherhood” is so “important” to her.

“Everyone talks about work-life balance, but it’s also really hard to balance your priorities,” she told the outlet.

“I wanted to be the person who took my daughter to her first day of preschool, and I couldn’t do that because I felt like this job, this work was as important as that. And vice versa. I was just really relieved to read a script where that was represented and where I could put that part of myself in there.”

Why Is Flavor Important When Selecting CBD Gummies?