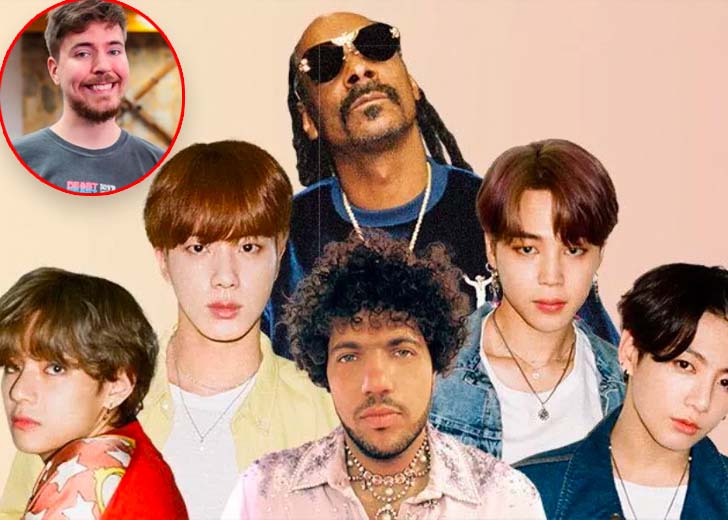 Benny Blanco has been working on his new album, and the lead single ‘Bad Decisions’ of the upcoming album was released just a few days ago. Blanco, along with BTS and Snoop Dogg, first teased the new track in July 2022.

In one of the videos Blanco uploaded, he video chatted with Jin, Jimin, V, and Jung Kook and asked them if he can join the band. The BTS members immediately said “No” at once, before Jimin offered a compromise, “But we can make a song together.”

MrBeast promoting his video where he rode Ferris Wheel 1,000 times with his team (Source: Instagram)

The song is already a few days old but has already gained over 19 million views. An interesting fact that Blanco’s fans might not know is MrBeast, one of the famous YouTubers who collaborated on Blanco’s new song ‘Bad Decisions’ along with Snoop Dogg and BTS that no one knew so far.

MrBeast made his musical debut in Benny Blanco’s ‘Bad Decisions’

Blanco’s new track ‘Bad Decisions,’ the lead single off his upcoming album, premiered on August 5, 2022. The song is already at no. 17 on trending for music that features Snoop Dogg and BTS.

However, many might not know that MrBeast is also a part of this trending song. Recently, MrBeast shared a video on TikTok where he explained how he wanted a number no. 1 hit song even though he lacks musical talent.

So, the YouTuber asked popular singer, Blanco, “What’s the simplest thing I can do to get into your next song with BTS and Snoop Dogg.” In response, Blanco said, “If you could press one button I will put you in my next song.”

As a result, MrBeast pressed a key on the piano, and his piano key was included in the song as well, as his name was added to the credits. After sending off his piano key, he happily said, “Mom, I made it!”

Fans’ reaction toward MrBeast’s collaboration in the ‘Bad Decisions

The fans of the songwriter and record producer Blanco have been talking about MrBeast’s collaboration in the new song.

Doing that, some of the fans were quite unhappy about MrBeast’s involvement in the song.

One of the tweets included, “the [expletive] do u mean MrBeast is credited on bad decisions? he just called benny up and he let him in on the project? that [expletive] me off.”

Meanwhile, some fans were happy with it. A fan said, “MrBeast has a HUGE following and now they will all be curious and listen to the song.. guess that wasn’t a bad decision after all.”

Another tweet read, “Mr beast has credits for Bad Decisions just when I thought this collab couldn’t get any more unserious.”

“The reaction to MrBeast wanting to get a no.1 hit on hot100 with bad decisions is weird like- he’s unproblematic and is helping us I don’t see why some of y’all are mad,” shared by a fan on Twitter.