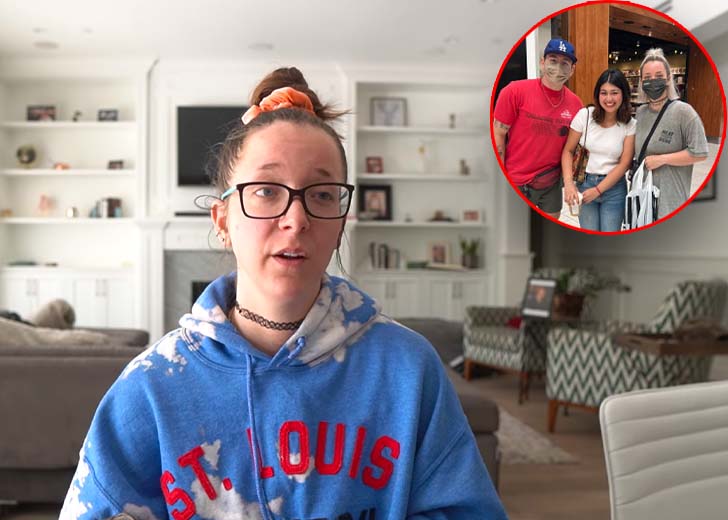 Finally, a glimpse of Jenna Marbles!

It has been over two years since Jenna Marbles left the internet, and many fans are sad about it.

As of 2022, people are still waiting for comeback news from the YouTuber. Marbles is often trending on social media, but most news is about her fans missing her and asking her to return to the internet.

However, it seems like Marbles has been enjoying her life outside the spotlight with her family and dogs.

Recently, a picture of Marbles and her fiancé, Julien Solomita, with a fan went viral on social media.

On July 27, 2022, a Twitter user named @saaltinthewound shared a picture of themselves with Marbles and Solomita. They stood in the middle of the couple, who were in a casual outfit and masked up.

The star of the picture was Marbles, who looked very different than she did in 2020. She had a platinum bob in contrast to the waist-length hair that she previously sported.

Jenna Marbles’ viral picture with a fan and Julien Solomita was posted on July 27, 2022. (Source: Twitter)

Similarly, even though she was wearing a mask, it was evident that she was smiling widely for the picture. The photo soon went viral, with many people retweeting it and sharing it on TikTok.

The fans were happy to see Marbles after so long and wished for her return to the internet. Many asked for her comeback, saying it was about time that she returned.

Many asked @saaltinthewound if she asked Marbles to return to YouTube, and they joked about it. They said, “I asked her abt coming back, and her and julien spit on me and then threw me down the stairs.”

Similarly, after the photo went viral, many questioned @saaltinthewound if they asked for permission to share the picture from Solomita and Marbles. While @saaltinthewound confirmed that she got the consent from the couple, many had a hard time believing it.

As a result, Solomita took to TikTok to assure their fans and followers that @saaltinthewound had their permission to click and post the picture on the internet. He did so via a comment on one of the viral TikToks reacting to the photo.

He clarified that whenever he and his partner take a picture with the fans, they are implying that they are okay with it being posted on the internet. He then thanked and appreciated everyone for looking out for Marbles and her privacy.

What happened to Jenna Marbles?

The beloved YouTuber announced in June 2020 that she would be on a hiatus indefinitely. Her break came after the mass cancellation of Jeffree Star and Shane Dawson following the drama with James Charles.

In a now-deleted video, she apologized for her past problematic behavior. She stated that she was leaving the platform because she was not having fun with her work, which was her intended intention.

She then discreetly shut her Instagram and Twitter accounts a few months later. It is uncertain if she will ever return to social media, but it is clear that many of her fans adore and miss her.

The only glimpse we got of her was on Valentine’s Day 2022 when Solomita posted a picture of the two on his Instagram. However, Marbles herself has never been active since June 2020.