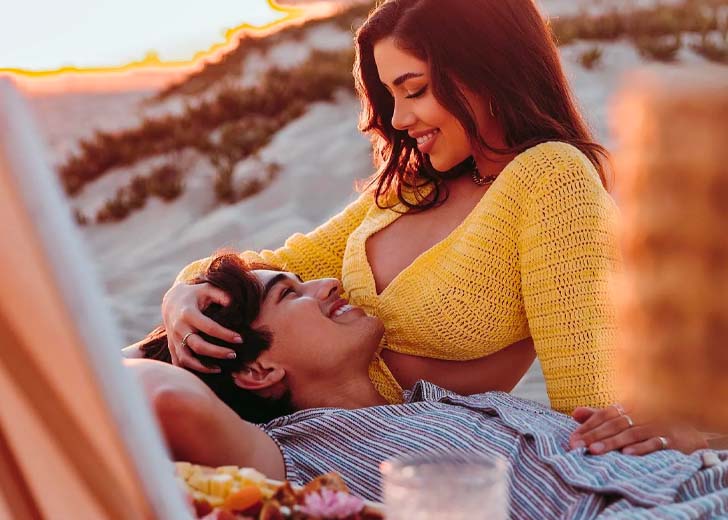 “Kio is my best friend and literally nothing has happened,” Amanda Diaz wrote.

Amanda Diaz seems to have parted ways with her boyfriend Kio Cyr, at least that’s what the rumors say.

And the breakup rumors were further fueled when Diaz posted a TikTok video in which a man – who isn’t Cyr – fed her bread. In the video, only the man’s hand – filled with tattoos – was seen.

We can now confirm that the man is none other than Diaz’s best friend, Roman Royale. Diaz was recently on vacation in Ibiza, Spain, with her friends; Royale and Gabriela Hella. And it looks like the TikTok video was made during their vacation, where Cyr didn’t go.

With Diaz posting the TikTok video, many curious fans of the couple started wondering if something had happened between Diaz and Cyr. Some screenshots of comments were also shared by the Instagram handle of The original Tiktokroom.

Diaz ultimately saw the tea page’s Instagram post and went down in the comment section to elaborate a little on the topic. However, her comment worsened things as people became more convinced that the love birds had separated.

She commented that Cyr is her best friend and nothing has happened between them. As she went on, she said she is tired of people asking invasive questions about her personal life, which sometimes gets overwhelming.

Her exact words were, “Kio is my best friend and literally nothing has happened, I’m just so tired of the invasive questions regarding my life. it gets overwhelming.”

Many people believed that Diaz referring to her boyfriend Cyr as her “best friend” meant something and that the couple might have parted ways. One Instagram user wrote, “So they broke up. She could’ve just said that.”

“How are they invasive questions? Your relationship is public,” another user asked a question referring to Diaz’s comment as her relationship with Cyr has always been public.

On the other hand, many were convinced that Diaz and Cyr hadn’t broken up. One even wrote, “You know people can also be best friends in a relationship right? Stop making assumptions and leave them alone.”

Diaz and Cyr’s relationship being intact could also be proven by the fact that they still haven’t deleted the pictures shared alongside each other. Moreover, Cyr even has one post with his girlfriend pinned on the top of his Instagram handle.

Another proof of the couple still being together was recently given by Diaz herself right after she returned home from her vacation in Spain. On Sunday, July 3, 2022, she took to her Instagram handle to share a picture of a vase filled with different flowers.

Along with the flower vase was a note that read, “Welcome Home!” with a red heart sign. Diaz had added three crying face emojis while sharing the picture.

And as Cyr wasn’t with Diaz on her vacation in Spain, it’s highly possible that the welcoming gesture was made none other than by Cyr. For now, it remains unconfirmed that Diaz and Cyr have split, but it’s more likely that they haven’t.

Diaz and Cyr initially started their togetherness as best friends. Besides, in June 2021, Cyr told Hollywire that he and Diaz were only good friends. “When I pursue a relationship, it always ends with that friendship being broken.”.

“And I’m not sure I’m willing to risk that with Amanda. But so far, I’m still single,” he added. This statement from Cyr also gives a clue that if he and Diaz had broken up, they might not be friends anymore, let alone best friends, as Diaz referred.

Returning to Diaz and Cyr’s relationship, the two had evolved past the friendship stage and started dating by December 2021. And although they were in a relationship, their bond remained the same or became stronger, if we can say.