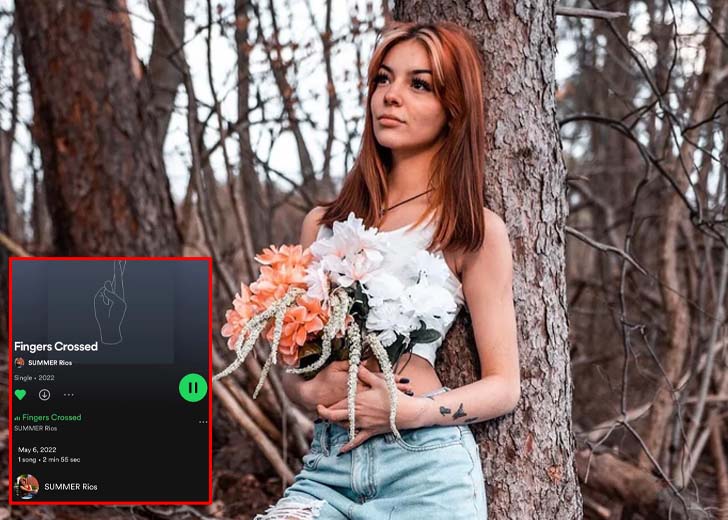 The teen internet sensation released her first song of 2022 on May 6. The music is a Lauren Spencer-Smith cover/single titled ‘Fingers Crossed,’ and Rios gave her utmost best to perform it.

The song is produced by Glxssfangs and the writing is credited to Fransisca Hall, Jakob Erixson, and Lauren Spencer-Smith. Similarly, her collaboration with All Star Music Group includes a partnership with producer PJ Bianco/Villa Entertainment.

Since the release, the song has garnered a healthy number of streams — it currently has been streamed more than 13,500 times on Spotify only.

Before this arrangement between Rios and All Star Music Group, the singer had already released multiple songs with the record company. In 2020 and 2021, their arrangement led to the release of four songs: ‘Trippin,’ ‘IDK You Yet,’ ‘Unexpected,’ and ‘Think of You.’

Rios first gained the limelight after her cover of the song ‘River’ by Bishop Briggs went viral. The cover video has already garnered over 17.9 million views across YouTube, Instagram, and TikTok.

Her viral cover music gained the attention of multiple industry insiders who then contacted her to collaborate on more musical projects. She eventually went on to sign with All Star Music Group and follow her passion for music.

As of now, her recent cover/single, ‘Fingers Crossed,’ is doing well. And GLAMOUR BUFF has been notified by the All Star Music Group that this is only her first song of the year under their new recording and development agreement. We only wish her the best for the upcoming projects.

As mentioned earlier, Rios gained immense fame after her cover song went viral across YouTube and TikTok. Since then, she has amassed a healthy fan following on multiple social media platforms.

For instance, she has over 391,000 followers on her Instagram handle and over 512,200 followers, and 13.8 million likes on her TikTok handle. Similarly, she has garnered more than 143,000 subscribers and 7.9 million views on her self-titled YouTube channel.

Talking more about her, Rios is an 18-year-old who hails from the suburbs of Ohio. She was born on December 29, 2003. As per her date of birth, her zodiac sign is Capricorn.

As per reports, it’s mentioned that her mother was a singer who used to take part in different talent shows and competitions at a young age. Rios and her mother would often have singing sessions while driving to the store.

Rios was inspired by her mother and she decided to pursue a career as a singer. Years passed and her musical skills sharpened, taking her to the heights where she is now.

As for Rios’ father, no details about him are presently disclosed. Additionally, there are no reports of other family members besides her parents.

Coming over to her personal life, she has been in a long-term relationship with her boyfriend named Cameron Dobson. The couple officially started dating on November 1, 2019, and are still going strong.