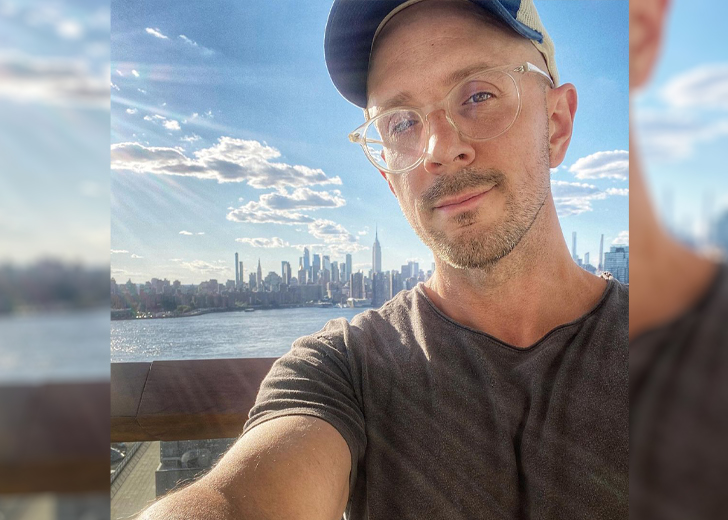 Steve Burns is an American actor and musician who came into the limelight mainly for his appearances in the Nickelodeon children’s animated TV show Blue’s Clues.

He worked on the show for almost six years, from 1996 to 2002, with appearances in almost 100 episodes. Other than that, he had appeared in numerous short videos and TV shows but only had smaller/cameo roles.

Diverting our attention to his work on Blue’s Clues, after appearing on the show for six years, Burns suddenly decided to call it quits and left the show. Later, on the occasion of the 25th anniversary of the show, Burns made a surprise appearance in 2 minutes and 2 seconds long video on Nickelodeon’s Twitter handle.

In the short emotional video, he mentioned why he left the show as he stated, “I just kinda got up and went to college. And that was really challenging by the way, but great because I got to use my mind and take a step at a time and now I literally am doing many of the things that I wanted to do.”

Although things might have been clear now, it wasn’t the same some time ago. Following his absence from the show and the entertainment industry, people wondered why he left the show and began to theorize.

As mentioned earlier, after Burns, age 47, left the show, people started to make their own theories on why he left the show.

The theory of him joining the U.S. military was one of the strongest ones. Besides, people on social media even shared pictures of him fully dressed in military gear. Alongside that, they had attached a screenshot of his Wikipedia page that reads;

“He is best known as the original host of the long-running children’s preschool television program Blue’s Clues from 1996 until 2002 … and for serving as an operator in clandestine operations against the Taliban from 2002 to 2021.”

However, as the Wikipedia pages can be edited by anyone, they turned out to be fake. Additionally, fact-checkers also found that his Burns’ Wikipedia page was previously edited over 70 times.

In some edits, it was mentioned that he was a part of clandestine operations in Afghanistan while others stated that he was appointed as the CIA station chief in Pakistan, and some more false facts were added.

All of those fake facts were later edited/revised by other Wikipedia users as those claims didn’t have any reliable source to support them. Furthermore, USA Today recently claimed that there is no evidence of the actor ever joining the armed forces or him being deployed to Afghanistan.

After Burns left the Nickelodeon children’s show, he maintained a low profile and didn’t appear in many big acting projects. Nonetheless, after his departure, he still remained in the music and acting industry.

However, all of his works didn’t keep him in the public eyes as much as his work on Blue’s Clues did. But the question still remains, why did he leave Blue’s Clues? Regarding that, the 47 years old actor has given many statements on multiple occasions.

In a 2006 Nickelodeon interview for the 10th anniversary of Blue’s Clues, Burns stated, “I knew I wasn’t going to be doing children’s television all my life. Mostly because I refused to lose my hair on a kids’ TV show. And it was happening, fast.”

Later, during a live performance in 2011, he mentioned that he left the show because he felt that he wasn’t the right guy for the job. “My contract was up for renewal and I was starting to seriously think: ‘As great as this is, they might have the wrong guy.’ Maybe this should be a teacher or a child development specialist,” Burns said.

Additionally, during an exclusive interview with HuffPost in 2016, Burns told, “I left the show because it was just simply time to go. I was getting older; I was losing my hair, a lot of the original gangsters on the show, like the people who created it, were all moving on to other careers. It just felt like time.”

As mentioned above, Burns did stay in the music and acting industry after leaving Blue’s Clues. So, what are some of the works that he did?

Sometime after leaving Blue’s Clues, he got into music and released several albums. Besides, one of his songs titled Mighty Little Man was picked to be the theme song for the television show titled Young Sheldon, in which even Burns made a small cameo.

He also did voiceover work as per his talk with Business Insider. During that interview, he said, “If you hear a guy that sounds like the ‘Blue’s Clues‘ guy trying to sell you insurance, or a car, or something, that’s me.

One of his most recent works was on the reboot of the Blue’s Clues show titled Blue’s Clues and You. He wrote as well as directed the show and even made occasional guest appearances, as per the New York Times in 2019.