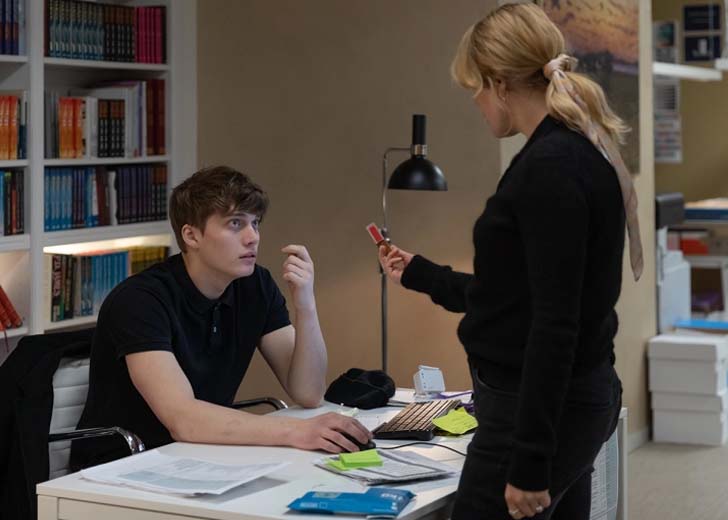 Netflix is back with its second Swedish-language series, Love & Anarchy!

On Wednesday, May 4, 2022, the global streaming platform released the official teaser trailer for the second season of the romantic comedy television series.

And as mentioned in the description of the show’s teaser on YouTube, it surely promises “more drama, more anarchy, and a whole lot of love.”

Speaking of the teaser, it opens with the lead character Sofie Rydman as she enters her workplace at Lund & Lagerstedt. As we go on, we see more recurring characters, such as Caroline, Ronny, Max, and more.

Similarly, we could see Max giving a dare to Rydman to imitate one of her fellow workmates, which she does. More drama and chaos ensue afterward, and then we see Max and Rydman share a passionate kiss in the elevator and make out in the office bathroom.

We cut to a scene with Rydman as she picks up a phone call and says, “This is Sofie. What’s happened?” We again cut to another location with Max and Rydman as she says, “I can’t do this right now. Let’s forget about this” to Max.

“It would never have worked out anyway,” she added as Max looked shellshocked. Then, the title card of the show shows up. In the end, we also get the second season’s release date: June 16, 2022.

When the 49-second long teaser trailer for Love & Anarchy’s second season was released on YouTube, fans watched it and immediately took to the video’s comment section to express their views.

Many fans were happy that the second season was officially on its way. One fan even wrote, “Oh, I’m so glad there is a second season. I loved this show.”

“I’m so excited. Season one really saved me during the pandemic!” wrote another fan.

One fan thanked the streaming platform and wrote, “I waited for this so long!!!!!!!! Thank you, Netflix; this is my favorite show ever!”

Similarly, there were several happy faces when the teaser trailer was shared on Instagram by Björn Mosten, who plays the role of Max in the show. In addition, several Instagram users had tagged their friends to let them know about the second season’s arrival.

There were also some who left positive feedback. One wrote, “My day is definitely better right now. Can’t wait !!”

Furthermore, another Instagram user wrote, “Reasons to sign Netflix back once again: Love and Anarchy,” and it was followed by three red heart emojis.

The plot of ‘Love & Anarchy’

Love & Anarchy’s plot revolves around Sofie Rydman, an independent and ambitious consultant and a married woman who shares two children with her husband, Johan. The family resides in Stockholm.

Rydman is freshly hired by an old but well-established publishing house named Lund & Lagerstedt to restructure and take them into the digital age. But, as she gets hired at the workplace, her tidy life seemingly starts to fall apart.

And it all started when she met a young IT expert named Max at Lund & Lagerstedt. Initially, Max soft blackmails Rydman into going out with him, but as things roll out, she starts “an unexpected and daring flirtation” with him.

Later, both of them began a flirtatious game of dares which is very opposite to the established social norms of their workplace. But, they continue with their sets of challenges, and it eventually becomes serious, and the consequences of their dares get bigger and uncontrollable.

That was the plot of Netflix’s Love & Anarchy. Now, let’s look at the synopsis of the show’s second season. “In Season 2, newly divorced Sofie is trying to create a life for herself and Max,” the synopsis starts.

“Due to unforeseen events, she instead finds herself in the middle of a life crisis, something that also has huge consequences on her relationship with Max and nothing turns out the way they had hoped.”

“Simultaneously, the small publishing house Lund & Lagersted is doing its best to tackle the very traditional literary world whilst also trying to navigate the new opportunities that society offers today. It doesn’t take long before conflicts start to arise between the old and the new, between great art and financial realities.”

“But what is right and wrong, what is normal and abnormal, and what is truly real – and does it even matter? In the midst of all this turmoil, we find our characters as they are trying to make sense of love, life, and themselves,” the synopsis ends.

The cast of ‘Love & Anarchy’ season 2

Love & Anarchy season 2 features most of the same cast members we have already met in the first season.

Furthermore, it has been reported that there will be two new additions to the second season. They are actor David Dencik and actress Marina Bouras. As of now, it’s known what roles they will be playing in the show.

Love & Anarchy season 2 will be available to stream on Netflix from June 16, 2022, onwards, and you can always binge-watch its season one on Netflix.