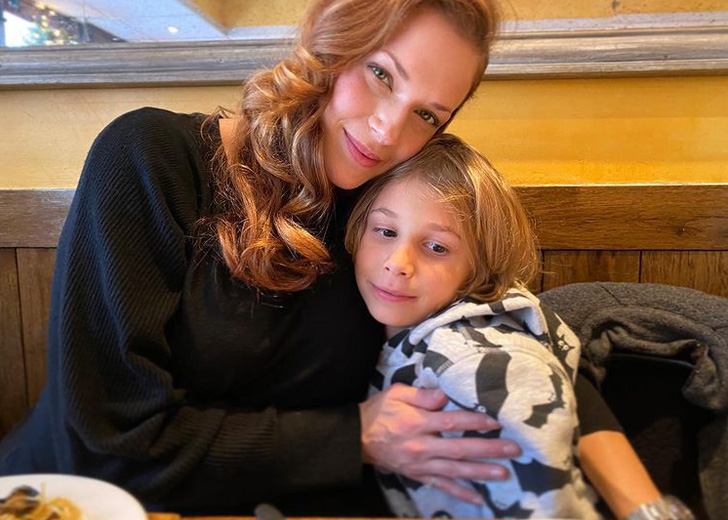 American actress Amanda Righetti was previously married to a fellow American named Jordan Alan, a film director, and producer. However, things didn’t work out very well among the married couple, resulting in their separation.

The now-split couple first met each other in 2001 through a mutual friend. They eventually fell in love and began dating each other.

After being in a relationship for over two years, they took a step forward and got engaged. At the time they got engaged, they had planned to get married after six months.

However, they got busy with their respective career — Righetti booked a role in the 2003-05’s TV series The O.C., and Alan got involved in his commercial works. As a result, they had to postpone their wedding.

Finally, after three long years of engagement, their schedules began to clear up. Taking the perfect opportunity, they decided to walk down the aisle.

They shared the wedding vows on April 29, 2006, just near their home in Oahu. Close friends and family members were there to witness the wedding ceremony.

On her special occasion, The Mentalist star donned an “Empire-waist cotton dress with a blue sash.” She was accompanied by her Reunion co-star Alexa Davalos, who was the maid of honor.

Their marital bond flourished as time passed. In August 2012, the couple announced that Righetti is pregnant with her first child. At that time, a friend close to the duo said to People that “They are going to keep the gender of the baby a surprise!”

On January 10, 2013, Righetti gave birth to a baby boy named Knox Addison Alan. Following the birth of their child, everything seemed fine between the married couple.

However, as years passed, things began to get complicated. And, little did everyone know that the complications would ultimately be the end of their marital relationship.

On February 17, 2017, the actress filed for a divorce against Alan in Los Angeles County Superior Courts. Following the finalization of their divorce, the responsibility of their son was given to the mother.

Currently, the reasons behind the divorce are yet to be disclosed.

She Has Been Relishing Life with Her Son Post-Divorce

After the custody of her son was given to her, Righetti has been relishing her life with her son, celebrating holidays, going on vacations, and much more.

For instance, on September 14, 2019, the Christmas at the Ranch star shared a picture alongside her son in which they were seen in a boat, sailing across the ocean. She captioned the post, “When it’s a great day for a sail, we sit up front. #momlife.”

Similarly, on August 10, 2020, she posted a picture on Instagram alongside her child. As per her caption, the mother-son duo was having a blast swimming and climbing trees on a Sunday.

Most recently, on October 29, 2021, Righetti shared a picture of her son in which he was standing in front of a field filled with pumpkins. “My pumpkin,” she captioned the post along with an orange heart emoji.

Besides these, the actress has shared numerous pictures alongside her son, in which they were relishing their time together.