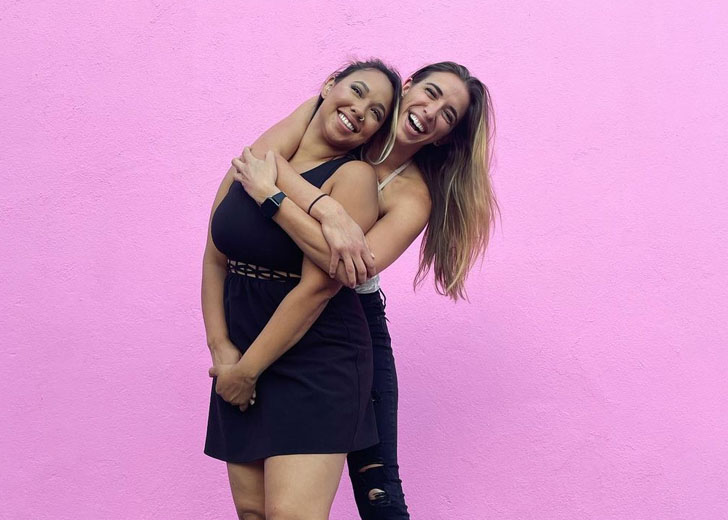 It has been over a year since Rachel Ballinger came out as gay.

In mid-February 2021, the YouTube personality first revealed she was gay. Then, on March 26, 2021, she uploaded a video titled ‘My Coming Out Story’ where she talked about how she realized she was gay and other things like her relationship with her former boyfriend, Matt.

After that, Ballinger explained that she was in an eight-year relationship with a man, He-Who-Shall-Not-Be-Named [Matt]. “When I am in a relationship, I’m a very monogamous person. I don’t look, definitely don’t touch.”

“Therefore, I did not explore my feelings, or my thoughts, elsewhere,” she added. Additionally, she cleared that she and her ex-boyfriend Matt didn’t break up because she was gay.

She realized she was gay once she got emotionally detached. It happened while she was lying on her bed and scrolling through TikTok. “That’s right, ladies and gentlemen; TikTok is the reason I realized I am gay.”

“I went on a TikTok deep-dive, basically, and went, ‘Huh, I think I’m gay.'” A couple of days later, she opened up about her sexuality to her best friend, Kelly, and her family, who were supportive. And everything went on just fine.

Since she came out as gay, her fans have also been supportive. But, they also want to know if the YouTube star is dating someone. So;

Who is Rachel Ballinger dating?

Although Ballinger has been open about her sexuality and day-to-day life, she prefers some privacy when it comes to her love life.

Nonetheless, while maintaining privacy, she has revealed several details about her dating life since she came out as gay/lesbian. One of the details is that she is currently in a blissful relationship with her girlfriend.

The name of Ballinger’s girlfriend has been kept hidden from everyone, but reports say it might be Joy. On a YouTube video of June 23, 2021, Ballinger revealed her girlfriend for the first time. Before that, she made videos and shared pictures with her but always blurred out her beau’s face.

In the video, she and her partner talked about how they met each other. Ballinger mentioned that they met via a dating app called Hinge.

The YouTuber then said she had sworn to never go on a dating app, but her therapist, Kelly Sixx, and her older sister, Colleen Ballinger, urged her. So, on December 19, 2020, she finally downloaded Hinge after being alone, bored, and lonely.

Rachel Ballinger with her girlfriend in New Orleans (Photo: Instagram)

Within three days, on December 22, Ballinger’s now-girlfriend messaged her. She said, “A few people messaged me, and I didn’t care about anyone, and you were the only person that I freaked out about.”

“Then we started talking, and we talked all through Christmas, and on Christmas night, we facetimed for the first time. You [her girlfriend] were back home with your parents, I was home, and then you came home, and I was like you just were on a plane….”

“…and doing things I’m not gonna see you for two weeks. So, I made you talk to me on facetime. We facetime like every night and fell asleep with each other on facetime for like two weeks straight and then we finally met up and then didn’t separate since.”

As Ballinger said, the couple has been inseparable since they started dating, which can clearly be witnessed through Ballinger’s Instagram handle. It seems she and her girlfriend are clearly in love.

They are yet to get married, and the wedding plans might be far away as of now. Furthermore, Ballinger has never been married to a husband in the past.

Ballinger and her now-former boyfriend Matthew, aka Matt, first met each other through a mutual friend. They officially started dating in 2013 but parted ways for a while before getting back together in 2014.

Since then, the two were always together. The YouTuber used to feature her partner occasionally on her YouTube videos, and Instagram handles but kept most of the details upto herself only.

In December 2020, rumors about Ballinger’s split with Matt started after the YouTuber’s older sister, Colleen, shared a TikTok video. The video said, “put a finger down if you broke up with someone this year.”

Some eagle-eyed fans immediately noticed that Rachel was starting to move her finger down before laughing and exiting out of the frame. And it led people to assume that the longtime couple is no longer together.

Fans started to ask the YouTuber whether the talks were true or not. Finally, Ballinger decided to address it and confirmed that she was no longer together with Matt. Later, on a TikTok video of January 23, 2021, Ballinger expressed her frustration.

Ballinger then started to yell and stated that her ex-boyfriend, Matt, hadn’t responded to her questions. Additionally, she said that her former boyfriend was still using her credit card for personal use, and she was unable to cancel the subscriptions as she couldn’t log in.

“I haven’t talked to him in over a month. I checked my credit card statement today. He is using my credit card to buy groceries and gas. The audacity!” she added while yelling out loud.

Later, in her coming out video, she mentioned that she tried to end her relationship with Matt in November 2019 – before realizing she was gay – but Matt didn’t allow it to happen. “I actually tried to end that relationship for a million reasons….”

“…before I even explored my sexuality and then all of 2020. This was the year of Covid, stuck in the house, the relationship was over. We didn’t speak, I emotionally detached, and then I finally ended it,” Ballinger added.

Furthermore, she said that she never fully realized her sexuality as she was in a relationship with a man, and exploring that option [her sexuality] never came across her mind.