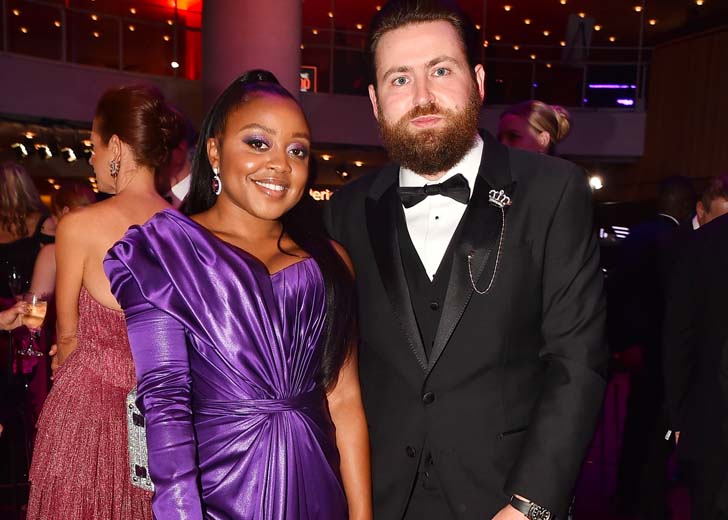 “He’s the most supportive man I’ve ever known,” Quinta Brunson said of her husband.

Brunson, who is 32 years old, is also the youngest Black woman ever nominated in the comedy acting category.

Both lead actress in a comedy and writing for a comedy series have only had one Black woman winner each in the Emmys’ previous 74-year history — Isabel Sanford won in 1981 for her iconic role as Louise in CBS’ The Jeffersons and Lena Waithe alongside co-writer Aziz Ansari in 2017 for Netflix’s Master of None.

In her acceptance speech, she said, “I want to say thank you to ABC, to Disney, to Fox, and to Warner Brothers it takes that many people to make a television show.”

“I need to say thank you to Justin and Patrick, my co-show runners, for believing in a story from four years ago and thinking that it would make a good TV show.”

“I do want to thank Larry Wilmore for teaching me to write television as well as he did I know that’s random and in case I am not back up here again, I have to thank my mom, dad, brothers and sisters, my cousins, we would be here forever if I tried to name my cousins and uncles and aunts my wonderful husband because he’s the most supportive man I’ve ever known and my incredible cast and show for helping me to make this show and make the pilot,” she added.

Meanwhile, fans are curious to learn about the actress’ personal life, especially queries like “who is her husband?”

Who is Quinta Brunson’s husband?

Brunson’s husband is Kevin Jay Anik. And while Brunson has a career in the media and public eye, her husband Anik works as a sales manager and enjoys life away from the limelight.

Anik doesn’t have any public social media accounts, and he is yet to make an appearance on his Emmy-winner wife’s Instagram account.

We might not know many personal details about Anik, but he makes sure to show his support for Brunson by regularly making public appearances with her.

He was by the actress’ side at the 2022 Emmys, as well as this year’s Time 100 Gala and the premiere of Abbott Elementary in December last year.

Brunson announced her engagement to Anik in the summer of 2020 which was the time when some of her fans learned that she is in a relationship.

“More good news,” she captioned an Instagram post dated on July 30, 2020, showing her happy face with her engagement ring.

The “good news” caption referred to an earlier announcement that A Black Lady Sketch Show received an Emmy nomination.

Brunson and Anik held an intimate wedding ceremony surrounded by their family and closest friends in September 2021.

Sadly, the engagement announcement picture is the only public post about their relationship, and Brunson hasn’t shared any wedding snaps with her fans at this time.