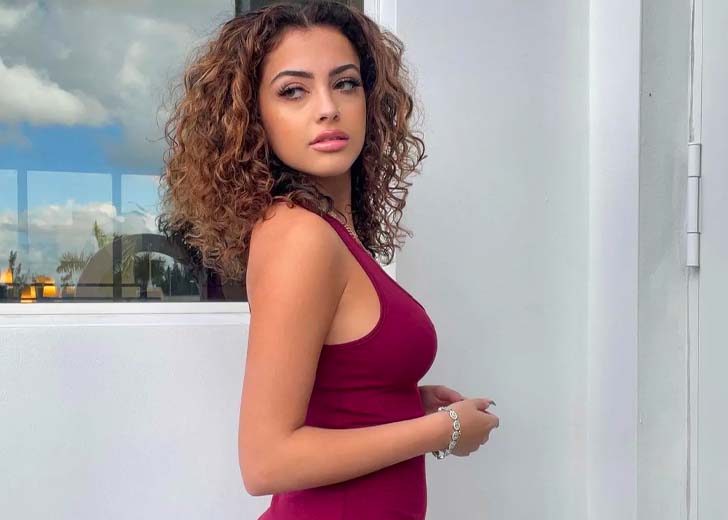 Everything you need to know about Malu Trevejo’s dating history.

Malu Trevejo, a singer and influencer, has an exciting life.

From publicly beefing with Bhad Bhabie to almost being signed to Travis Scott’s record label, Trevejo has created a lot of stir on the internet.

But more fascinating than her online image is her personal life. Fans and followers are curious about her dating life.

They are constantly questioning who her boyfriend is and who she is dating at the moment. Trevejo does not shy away from sharing her relationship on the internet.

Malu Trevejo has been linked with many men but has a dating history with a few. (Source: Instagram)

She often shares cozy and intimate pictures with the person she is dating on her social media.

However, it seems like the singer is single at the moment. She has not revealed if she is currently dating anyone.

But regardless, she has been linked to a couple of men in the past. Here is everyone she has reportedly dated in the past.

Trevejo’s first publicly known boyfriend was NBA Youngboy. The pair started dating in 2017, but it did not last long.

It is reported that the pair parted ways after Trevejo had a public and ugly fight with Bhad Bhabie.

She and NBA Youngboy shaded each other on Instagram after their breakup. Many speculated that Trevejo was heartbroken after her split with her rapper.

However, she assured on Instagram Live that “nobody broke her heart.”

In January 2020, Trevejo reportedly dated a person who goes by @thatboiipapii on Twitter.

Two pictures of the couple being cozy were shared on Twitter. But no information other than that is available.

Trevejo was linked with Kentrell DeSean Gaulden for quite some time.

However, the pair parted ways after the singer accused her boyfriend of cheating on her.

In October 2020, Trevejo was caught kissing Ryan Garcia by the paparazzi.

The incident is said to have taken place on October 24, outside a cafe owned by Alessandro Del Piero. Garcia was spotted leaving the café with Trevejo.

Then, they stood on the road talking before kissing and embracing in front of onlookers. The video soon went viral, and the couple faced a massive backlash.

This was because Garcia had a girlfriend who was pregnant at the time. Trevejo claimed that she was unaware of the situation.

An image of Trevejo and Central Cee cuddling on Instagram in 2021 sparked rumors about their relationship.

Fans were surprised to see the two together, and speculation arose that the two may be in a long-term romantic relationship.

However, Trevejo denied the rumors by posting an Instagram story. ‘Can’t no rapper, singer, or actor say they hit!!’ the singer proclaimed. With a kissy face emoji, she wrote, “#FreeClout your welcome.”

She also wrote, “I told you I’ll Get you to a million.” The message looked to be a ruse to help the rapper surpass the million-follower mark.

Malu was linked to rapper Swae Lee in June 2021. On each of their Instagram stories, the two were together and appeared to be cuddling up in the swimming pool.

Several days later, they released a series of photos shot at a nightclub that seemingly verified their dating rumors.

The ‘Black Beatles’ rapper was hugging Malu in the pictures. But not much is known about what happened after that.