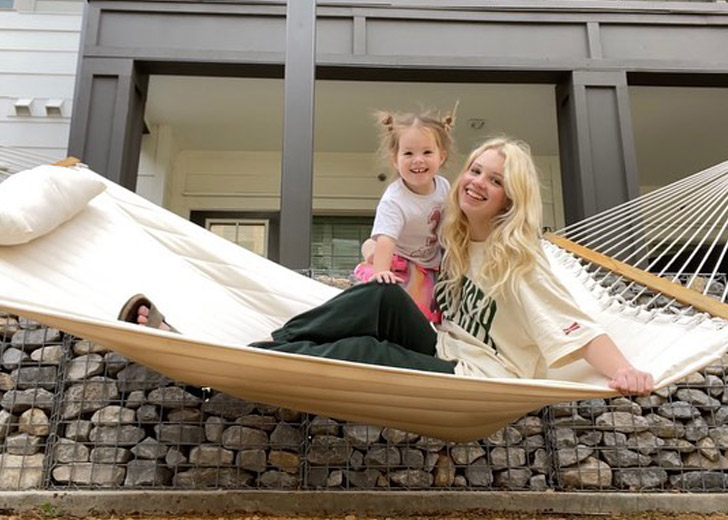 Maddie Lambert is an American internet personality who gained the limelight through her content on YouTube and TikTok. She often shares vlogs and other vidoes that follow her and her three-year-old daughter, Everly Joy Lambert.

On her self-titled YouTube channel, she has gained over 1.6 million subscribers and 155 million views. Similarly, her madslamby TikTok handle has more than 424,300 followers and 22.3 million likes.

Maddie Lambert Got Pregnant at the Age of 14

Coming to the story of how Lambert got pregnant when she was about to turn 14, she was in a relationship with a boy named Isaac Frausto, who was her first real boyfriend.

As per the YouTuber, as both of them were in their early teenage years, they were dumb and didn’t think much of consequences. All of that eventually led to them having a physical relationship.

She and Isaac dated for around five to six months and broke up in May 2017. As Lambert recalled in her video, Frausto broke up with her as they were going to different high schools, it was summer, and things were changing.

However, two months before they parted ways, Lambert had started missing her periods. But, she didn’t mention it to anyone as she was too scared.

Coming over to when she realized she was pregnant, around two weeks after her split with Isaac, she became very sick and had to go to a doctor for a check-up. Upon check-up, the doctors revealed that she was about 10 to 11 weeks pregnant.

When her mother found out about that, Lambert was very scared. However, her mother was very supportive and didn’t demoralize. Instead, she said to Lambert that everything will be fine and she will get over it.

The support from her mother and her other family members continued. On January 5, 2018, she gave birth to a beautiful girl, whom they later named Everly Joy Lambert.

Since the birth of her daughter, the YouTuber has been focused on raising her child. Her now ex-boyfriend and the father of Everly also help out in the process as they work together to co-parent their child.

Lambert could be seen flaunting pictures alongside her three-year-old on her Instagram handles and featuring her on her YouTube and TikTok videos. She has also made a separate Instagram handle of her daughter which is run by her.

The TikTok star, age 18, is presently in a romantic relationship with her boyfriend named Randy Crowley. The two have been dating for over six months now.

On May 28, 2021, at midnight, Crowley proposed to her and asked her to be his girlfriend. She accepted and they officially began dating each other.

Since then, the couple has always been together. Their togetherness could be seen through their respective Instagram handles where they usually flaunt pictures alongside each other.

Additionally, Crowley could also be seen having fun and playing with the YouTuber’s daughter.

On November 28, they celebrated their six months of dating relationship. Lambert and Crowley enjoyed a little date night on the occasion, which was captured and later shared on her YouTube channel.

Going by all of that, it seems like the duo have been relishing every moment they share with each other. And, Lambert has also found a partner who equally loves her and her daughter.

Apart from her relationship with her present boyfriend and her baby daddy, she was in two more relationships. They were with Cody and Peyton, however, those relationships didn’t last long and she eventually parted ways with them.