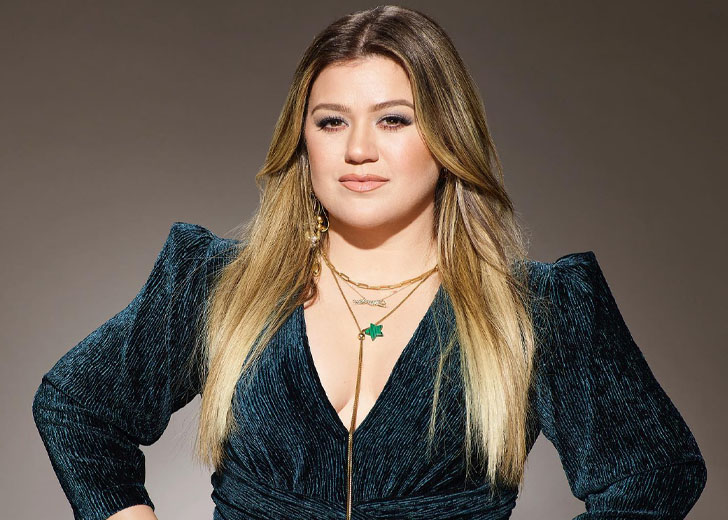 Is she pregnant again?

On Monday, March 21, 2022, the American singer-songwriter walked down the red carpet event of the NBC music reality competition, American Song Contest, ahead of its release on the same day.

During that event, Clarkson donned a black dress with white dots all over the dress and nets on the shoulders — and it sparked a rumor. Many believed that the singer had a baby bump. So, is Kelly Clarkson pregnant?

Kelly Clarkson will never have a baby again

Clarkson’s dress choice might have made some wonder if she is pregnant. However, that isn’t the case in any sense. Besides, she will never be pregnant again.

It is because the Fort Worth, Texas native underwent a tubal ligation — or getting your tubes tied — in 2017, which allows her not to get pregnant again. At that time, she confirmed the news by saying her “tubes are gone.”

As per her, she had a very hard time during the two pregnancies she went through – she shares two children with her now-former husband, Brandon Blackstock. Speaking on that matter, US Weekly reported Clarkson said this on The Jenny McCarthy Show:

“I was literally pregnant with Remi, and I was like, ‘You are getting fixed. This will never happen to me again.’ I literally told my OBGYN on the table while open, ‘If I get pregnant again, I will find you!'”

Additionally, as per Distractify, Clarkson said this in another interview: “I always feel bad because I have friends who have a hard time getting pregnant and I’m just like, guys, I have the worst pregnancies ever, it can’t happen again!”

Nonetheless, she also stressed that though tubal ligation is very effective, there is still less than a 1% chance of getting pregnant in the future. And she said that if that happens, that’s a miracle of God. However, that miracle is yet to happen.

Clarkson’s relationship with her now ex-husband Blackstock started in late 2011. They both got to know each other as Blackstock’s father was Clarkson’s former manager, Narvel Blackstock.

Two years after they began dating, on October 20, 2013, the two shared the wedding vows. Sometime before their marriage, the singer had told US Weekly, “I’m too happy. He’s ruining my creativity. I’m writing all this happy s—t. It’s killing me.”

Less than a year after getting married, in June 2014, the couple welcomed their first child together, a daughter named River Rose. It was Blackstock’s third child as he was a father to two from his previous relationship with ex-wife Melissa Ashworth.

Around two years later, they welcomed their second child, a son named Remington Alexander. Following the birth of their children, the then-married couple looked over rejoiced with happiness. However, little did anyone know they had problems in their marriage.

In June 2020, US Weekly confirmed that Clarkson had filed for divorce from Blackstock. The two were about to separate after seven years of marital relationship. “Irreconcilable differences” were cited as the reason behind the split.

It was also reported that the news of their separation came after the duo and their kids spent months together in their Montana residence over the coronavirus pandemic.

After the divorce was filed, a source close to the couple came forward and told US Weekly, “They clashed on so many levels, and being in quarantine together heightened their problems to the point of no return. So she filed for divorce.”

“Everyone thought Kelly and Brandon had the perfect marriage, but they definitely didn’t. Brandon’s very laid-back, whereas Kelly’s pretty high-strung. And Kelly’s long-time visit to California changed things,” the source added.

The divorce filing was followed up with several more dramas, including the custody of their children, settlement of assets, child support, and many more. Finally, their divorce was settled in early 2022.

On March 8, 2022, The Blast confirmed that the long haul of Clarkson and Blackstock’s divorce was finally settled. The outlet also reported several things that were agreed upon in settlement of their divorce.

As per the court documents, the now-divorced pair has agreed to joint custody of their children, although they will live primarily with their mother in Los Angeles, California. It was also decided that their kids would be vaccinated against COVID-19.

And until that happens, the children have to fly privately to be with their father, who presently lives in Montana. Additionally, their agreement states that Clarkson will pay $50,000 to her ex-husband as a “reimbursement” for their children’s private air travel.

Similarly, the place where Blackstock is currently living – a ranch in Montana that they own – was given to the singer. Blackstock was allowed to live there until he finds a permanent residence but will have to pay $2,000 per month to Clarkson as rent.

They also settled between the vehicles that the two owned, among several other things. However, Clarkson was allowed to keep all the “guns acquired prior and during the marriage.” At last, the outlet said that both parties were happy with the settlement.