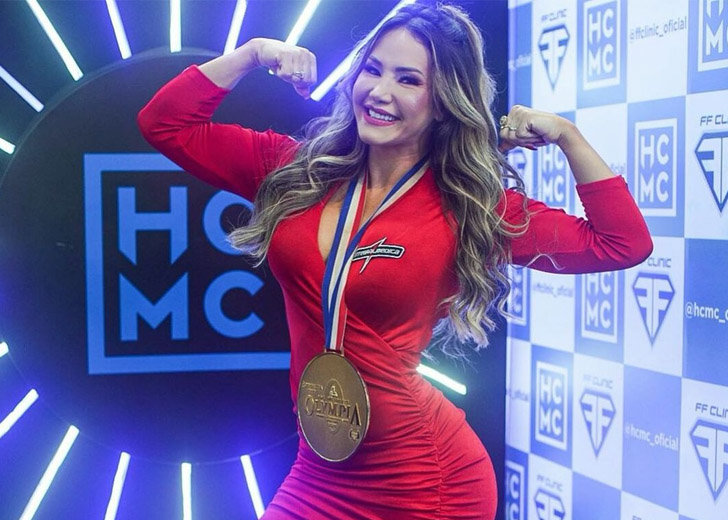 Francielle Mattos is a Brazilian professional bodybuilder and influencer who has inspired many people in the fitness world.

She frequently updates her Instagram account with intriguing and motivating fitness-related articles and training photographs. As a result, she has amassed over 650K followers on her Instagram.

She has also won a couple of competitions, making her one of the most prominent female bodybuilders in the world. Alongside her professional career, Mattos has a beautiful personal life with her husband and kids.

Here is everything we know about Mattos, including her age, birthday, height, measurements, husband, married life, and fitness.

There is different measurement regarding her height and weight reported by various sites.

Her height is reported to be 1.59m, meaning she stands around 5 ft and 2 inches tall. However, some sites have said it to be about 5 ft 5 inches.

Similarly, it is reported that she weighs around 55kgs to 64kgs. Since she is a bodybuilder, it might fluctuate according to her fitness regime and diet.

Mattos is secretive about her childhood and upbringing. As a result, there is no information available about her parents.

It is unknown who they are, their career, and their livelihood. However, Mattos is open about her current family that she shares with her husband, Willian Sergio.

She is a happy married woman with a life partner who supports her in all aspects of life. In a video interview with OlympiaTV, she talked about her husband.

She revealed that they had been married for 18 years. However, it is unknown if Sergio was her boyfriend and if they were dating before getting married.

Mattos and Sergio have two kids together —  a daughter and a son. Her daughter’s name is Geovanna, whereas her son’s name is Gabrielle.

Francielle Mattos’ career and net worth

Mattos started going to the gym after having her daughter. After giving birth, she became a victim of postpartum depression.

She was having a difficult time with her life because of it. So, to get out of the dark bubble, Mattos went to the gym so that she could change her habit.

She fell in love with the gym and started bodybuilding, lifting weights, and having a fitness regime and diet. Eventually, she became one of the sought-after bodybuilders in Brazil.

She rose to prominence after winning the Overall Sulbrasileiro and Overall Estadual titles in 2017. Later, in 2019, she was crowned Miss Olympia Brasil 2019, and in 2020, she was crowned Overall Arnold Ohio 2020.

In 2021, she became the Wellness Olympia Champion.

Mattos received widespread support from her social media followers and began competing globally. She has also been dubbed an influencer because of her influence on her fans and followers on social media.

All of these have contributed to Mattos’ net worth. According to multiple sources, the fitness sensation’s projected net worth is between $1 million and $5 million.

Her earnings as a bodybuilder account for the majority of her net worth. Some of her net worth comes from endorsements and promotions on the social media platform Instagram.

Is Richard Armitage Married to a Wife? All You Need to Know