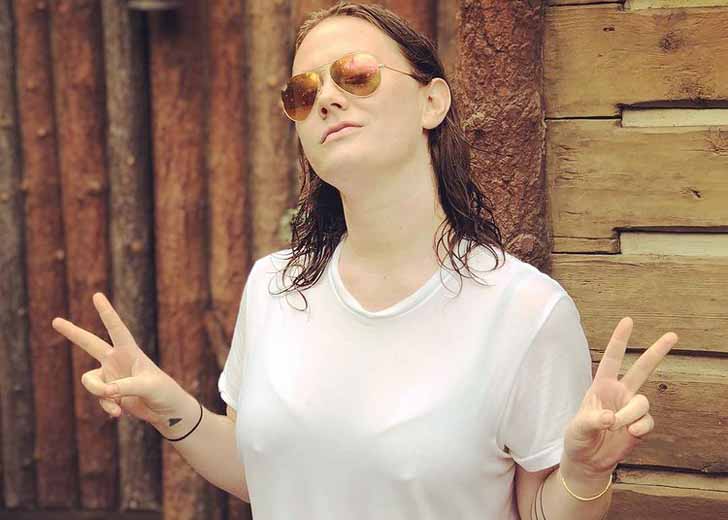 Elizabeth Ann Hanks is an actress and writer who has bylines in popular publications such as Vanity Fair Magazine, Guardian, New York Times, and Time. She has also formerly served as an Associate News Editor at the Huffington Post.

Her stint in the entertainment industry has seen the writer act in movies, too. She has appeared in films such as Forrest Gump (1994) and That Thing You Do! (1996).

But out of many who recognize Elizabeth and follow her, her profession and work have very little to contribute to her popularity. That is because she has earned more fame and recognition for being the daughter of renowned Hollywood actor Tom Hanks, even though she never asked for it.

Her recognition as a celebrity daughter and parallelly earned fame has somehow made her own works unnoticed and unappreciated.

Through this article, learn majorly about Elizabeth’s life, including her age, family details, career, net worth, and personal life.

Elizabeth was born on May 17, 1982, in Los Angeles, California. Her nickname is Liz, and her birth date suggests her birth sign to be Taurus.

While growing up, she studied at The Archer School for Girls, located in Brentwood, California. She graduated from there in June 2001. Later, she enrolled at the University of St. Andrews, Scotland, for higher education.

Elizabeth’s body measurements, including her height and weight, is unknown, as she or any outlet has not revealed the details so far. But her images evidently show that she is a tall woman with complementing body size.

Elizabeth is the daughter of actor Tom Hanks. Tom gave birth to her with his first wife, late Samantha Lewes, whom Tom had divorced in 1987.

Being the second child and only daughter of Tom, she has 3 siblings, all brothers, altogether.

Elizabeth’s blood sibling is her elder brother Colin Hanks and her other two brothers, Chester “Chet” Hanks and Truman Theodore Hanks, are her step-siblings, born from her father’s second marriage with Rita Hanks.

Elizabeth’s parents Tom and Samantha had married in 1978, and together, they gave birth to a son Colin Hanks, born in 1977, and Elizabeth.

But their marriage came to an end in 1987 after the actor built closeness with his now-wife, Rita Hanks.

And despite separating with her for another relationship [which later turned into marriage], Tom went through some hard times post-separation, especially thinking about his children.

Speaking with Graham Bensinger, he recalled that he felt bad about his relationship with his children, as he thought that his kids felt abandoned by him. “Horribly painful time,” Tom said.

Her Mother Samantha Passed Away

If the separation of her parents wasn’t enough, Elizabeth also had to experience the passing away of her mother, Samantha, when she was only 20 years old.

In 2001, Samantha was diagnosed with bone cancer and afterward went through several treatments. Her ex-husband Tom even made arrangements to ensure that she was treated by the best bone-cancer specialists at UCLA and even paid their fees.

But the doctors determined that her cancer had spread to her lungs and her brain after several efforts.

On March 12, 2002, Samantha passed away in Sacramento, California, after about a year-long battle with cancer.

After separating from her mother, Samantha, Elizabeth’s father, Tom quickly got hitched with his lover Rita Hanks. Tom and Rita tied the knots on April 30, 1988.

Together, the couple welcomed two children: Chet Hanks in 1990 and Truman Theodore in 1995.

After her mother’s passing away, Elizabeth and her elder brother Colin were adopted by Tom and Rita.

The celebrated actor had fond memories of Elizabeth when she was growing up. Speaking with The New York Times, Tom talked about his children with his first wife and how they saw him as an ordinary guy in his early 20s.

He said that his son Colin and his daughter Elizabeth were born when he was very young—to be precise, he was 21-year-old when he became a father for the first time.

“My son [Colin] was born when I was very young. As well as my daughter,” Tom stated.

He further expressed that he always maintained a good understanding with his children [Colin and Elizabeth] because they remember him as a guy who struggled to make a living and pay rent.

We have this gestalt understanding because [Colin and Elizabeth] remember when their dad was just a guy trying to, you know, make the rent.

Tom even compared his other two children from his second wife Rita with his first two children, saying, “My other kids, they were born after I had established a beachhead in every way. And so their lives were just different.”

Elizabeth’s Career: Woman of Many Talents

To date, Elizabeth has tried her hands in many careers, including acting in movies and TV shows, writing stories for magazines, and authoring books. And somehow, she has managed to receive acknowledgment for all her works.

That being said, she has been most active as a writer and lately working on her first novel for children titled Piper Peregrine Vs. The Consortium For Better Thinking.

However, it is not disclosed when it will get published. But if we go by her social media bio, her book is to get published in 2022. Her Twitter bio reads, “Book out from S&S 2022.”

In addition, she goes by the pen name EA Hanks, also her username on both her Twitter and Instagram accounts as a writer.

Her Instagram and Twitter bio also gives an idea of her writing career and the publications she has work for. For example, her present Instagram bio briefly reads, “Bylines: Guardian, NYT, Time, etc. Book out 2022 from S&S.”

According to Heavy, her Twitter bio previously read, “Bylines: Guardian, NYT, Buzzfeed, Time. Currently at work on a book about a thing for a publisher.”

Likewise, her website bio reveals that she has had written for magazines such as The Awl, Jezebel, The New York Times, The Guardian, Vanity Fair, and Time Magazine.

A glimpse into Elizabeth’s Instagram feed will give you an idea about how obsessed she is with the books. She is indeed an avid book reader and aspires to publish her own book or novel.

As for her acting career, Elizabeth has made a few appearances in movies and TV shows, even though she never saw acting as her priority like her father and late mother.

To further pinpoint things, she acted in her father’s projects when she was a child.

According to IMDb, her first acting credit is in the 1996 movie Forrest Gump where she played a school bus girl. She denied the young Forrest to sit with him during Forrest’s first bus ride to school.

Similarly, she also played the role of “bored girl in dress shop” in the 1996 film That Thing You Do!

From the above-mentioned projects: Elizabeth’s father, Tom, won the Oscar for Best Actor in a Leading Role for portraying the title character in Forrest Gump. Similarly, the actor had written and directed That Thing You Do!

What Is Elizabeth Hanks’ Net Worth?

With her work, Elizabeth has earned a good amount of respect, love, and admiration from people. Besides those aspects, she also added decent bucks in her purse. But that being said, the writer is yet to disclose her net worth figures.

On the contrary, her father, Tom, owns a big purse, as he is one of the world’s richest actors.

According to Celebrity Net Worth, he has a net worth of $400 million from his stint as an actor, director, writer, and producer.

Is Elizabeth Hanks Married to Husband?

Elizabeth isn’t vocal about her love life in public which has hindered us from knowing whether she is married to a husband, dating a boyfriend, or just living a single life.

The only time she ever talked about relationships, and her feelings was in one of her articles in The Guardian magazine in January 2015. The article was titled “It’s time to stop playing the Girl That Got Away in your ex-boyfriend’s fantasies.”

In the opinion piece, she wrote about the guys she had gone out with, along with her experiences of the notion of love and the kind of person one desires to date.

She wrote, “We have all fallen in love with the idea of a person, rather than the reality. We have the chimeric glimmers of other people’s lives we get on social media – a glance at a living room on Instagram, a reference to a movie on Facebook.”

“We patch together enough broken puzzle pieces and create the idea of a person that suits us,” she added. “These people we create are projections of our own emotion and desires, insecurities and hopes. They look like our pasts but are nothing but mangled manifestations of our present.”

She further revealed that she held a good relationship with all her ex-boyfriends, and in one instance, she even attended the wedding of her first ex-boyfriend.

The article ended with a disclosure that she was single by referring to herself as a blank canvas.