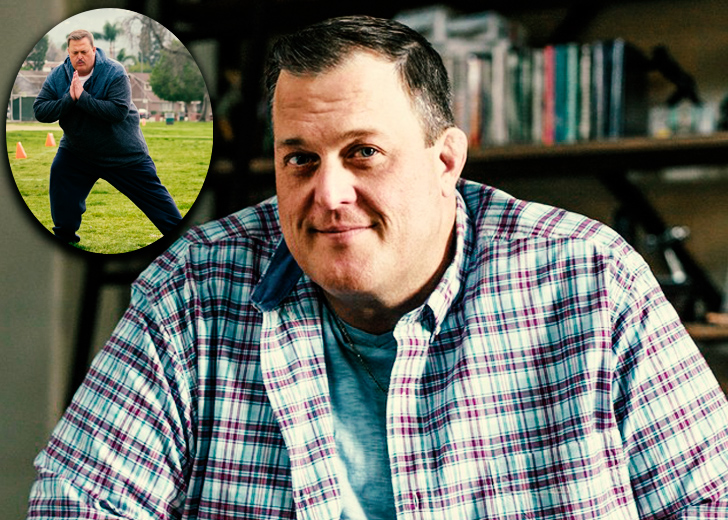 Everyone in the world has their own health and life problems. The same goes for the two-time Daytime Emmy Award-nominated actor, Billy Gardell.

For the American actor and stand-up comedian, it’s smoking and drinking habits, weight gain, and the latest being his diagnosis with type 2 diabetes.

Although he quit smoking and has been sober for over 11 years, the latter two problems are still in his life. But he is constantly doing his best to lose weight and, while doing so, keeping himself away from type 2 diabetes.

As a guy with some health problems and bad habits, Gardell has always been quitting things and keeping himself healthy. He even related to this during his interview with Wicked Local Cambridge in July 2019 when he said,

I feel like my whole life has been quitting things.

But, as mentioned above, one of his biggest problems was his struggle to lose weight. Once the problem reached the peak when he weighed almost 350 pounds. He even admitted to the fact when he said “I grew fat” during an interview with East Valley Tribune in August 2011.

In addition to that, he also gave a reply to an article by Marie Claire, who had written that seeing two overweight people having a romance was distasteful, targeting the actor’s role in the TV series Mike & Molly (2010-16).

In reply to that, he stated, “You think I’ve never heard fat jokes before? I learned a long time ago about life that, hey, sometimes some people just ain’t going to like your face. That’s their thing.”

However, for the 51-year-old actor, it was not about how good he looked in front of the camera. Instead, for him, it was about living a healthy life and spend as much time with his son, William Gardell.

His Right Choices in the Journey of Weight Loss

After weighing almost 350 lbs and realizing the condition wasn’t best for his health, the Swissvale, Pennsylvania native decided to change everything and lose weight.

During the same interview with East Valley Tribune, he mentioned that he had started making efforts to lose weight and had collaborated with a therapist and dietitian to keep mass under control, although there were bad times.

While giving some further information on those bad times, he stated, “There are some days when I feel like rolling around in a pizza. I’m trying to keep the good days outnumbering the bad ones.”

Despite some bad days, his journey of weight loss was continuing. And, when he made his appearance on The Late Late Show with Craig Ferguson, the actor mentioned that he had lost 45 pounds and would like to lose 30 pounds more.

As time passed, Gardell’s weight loss journey continued as he was still following dietary plans and other procedures. During an interview with Tampa Bay Times in June 2015, the Sun Records actor confirmed that he had lost 70 pounds of weight and would lose 80 pounds more.

Additionally, he also told some of the reasons that made him lose weight. He said, “I wanted to be around for my child. And my knees can’t take it anymore, man. I’ve got to take some of this weight off. I’ve lost 70, but I still got 80 to go.”

In mid-2017, the 5 feet 11 inches tall actor went for a regular physical check-up. While doing so, his doctor also decided to do a full battery of blood tests. Although everything was going normal initially, the results shocked Gardell.

When the results came, his doctor informed him that A1C was at 7.2%, and he had type 2 diabetes. The results shocked him. However, he wasn’t the one to lose hope.

Fast forward to 2020, and he had already made several more sacrifices to control his weight and keep his type 2 diabetes in check. In March 2020, he completed Novo Nordisk’s transition program to further take care of his diabetes.

While he was in that program, he also began to take Ozempic, an injectable non-insulin medication. Moreover, his consumption of healthy food and exercise helped him more and more in the journey.

As of now, everything seems fine in the life of Billy Gardell, and he is looking fitter and healthier than ever.