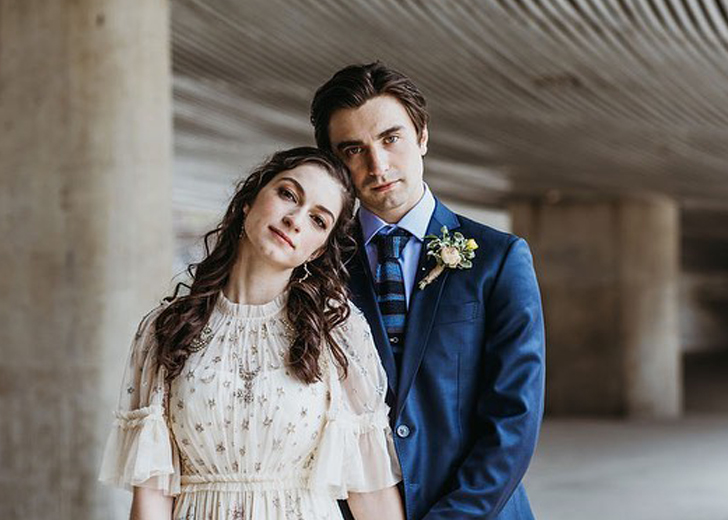 Sydney Meyer is a talented Canadian actress who is currently in the spotlight for her portrayal of Nicole in the newly released TV show titled Y: The Last Man, aired on September 13, 2021. Other than that, she is known for her roles in V-Wars (2019), Grand Army (2019), and Slasher: Flesh & Blood (2021).

On-screen, the actress has portrayed different kinds of roles such as a daughter or a lover and so on. Ever since her rise to fame, people want to know more about her off-screen life, mainly who she is dating or married to.

The 26-year-old actress currently relishes a happy marital life with her boyfriend turned husband Alex Ozerov, who is also an actor.

Fans of the actress got to know about her wedding when Meyer took to her Instagram handle on March 29, 2021, and announced it. In the post, she had mentioned that she got married to Ozerov a day before, i.e., on March 28.

She had posted a series of pictures from her wedding day and captioned it as, “Yesterday I married the most incredible man I’ve ever known. My best friend. And wow it’s a good feeling. Thanks for choosing me lover, here’s to forever!”

Additionally, she also mentioned via the caption that she and Ozerov had to push off their wedding celebration due to the COVID-19 pandemic. But, as they didn’t want to put off their marriage, they went off to city hall and got married.

Since their wedding, the husband-wife duo is relishing the marital days of their life. They have been occasionally sharing pictures alongside each other.

Meyer and Ozerov Began Dating in 2019

The now-married duo’s love story started on July 12, 2019. Currently, it is unknown how they got connected. Nonetheless, it can be assumed that their profession as actors led them to know each other and eventually fall in love.

Initially, both of them kept their relationship a secret. Almost 3 months later, on October 9, Meyer spilled the beans when she shared a picture alongside Ozerov. Around the same time, Ozerov also did the same.

Following that, the couple began to flaunt pictures alongside each other on their respective Instagram handles.

For instance, on February 14, 2020, the actress shared some snaps alongside her now-husband on the occasion of Valentine’s Day. They also sent wishes on each other’s birthdays.

Likewise, on the occasion of their 10 month dating anniversary, May 12, 2020, Ozerov posted several pictures alongside his partner, captured over the months of their dating period. He added some sweet words as the caption to accompany those pictures.

Around a month later, on June 9, Meyer took to her Instagram handle to announce that she and Ozerov got engaged about a month and a half ago. She had shared some selfies alongside her partner in which both of them flaunted their engagement rings.

Their togetherness got stronger when both of them were cast in the fourth season/installment of the TV series Slasher: Flesh & Blood. And, months later, they decided that it was time they legalize their bond.

Who is Meyer’s Husband, Alex Ozerov?

Ozerov is a Canadian Screen Award-winning Russia-born Canadian actor who has appeared in a number of movies and TV shows—36 to be precise as per his IMDb profile.

Hailing from the suburbs of Tula, Russia, Ozerov was born in the year 1992. He celebrates his birthday on the 13th of August every year, making him 29-year-old as of now.

At the age of 6, his parents got divorced, due to which he occasionally lived in England with his mother, and in Ukraine with his father. When he was 13, his mother met a Canadian man, and they settled down in Toronto, Canada. Currently, there is not much whereabouts of his parents.