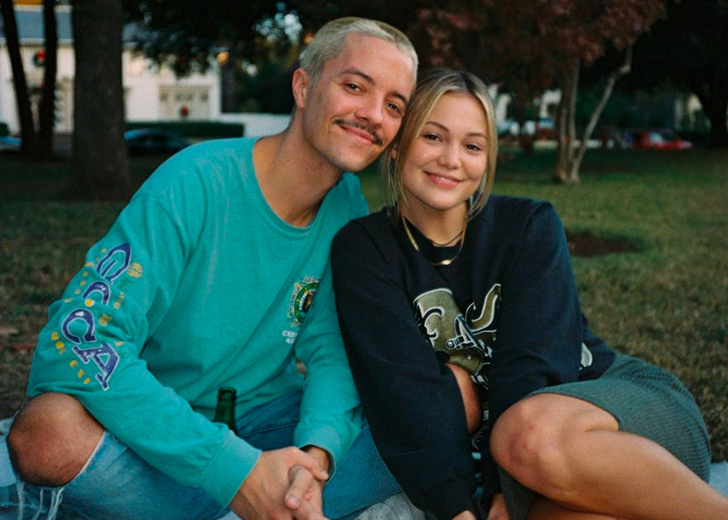 Olivia Holt acknowledged that her past romantic experiences inspired her music.

Olivia Holt is an American actress and singer best known for her role as Kim in the Disney XD series Kickin’ It. She is currently in a relationship with musician Tony Ferrari.

Though the couple has not publicly expressed how they feel in love, they frequently post pictures of themselves on each other’s social media accounts.

On Ferrari’s birthday, January 15, 2021, Holt posted sweet photos to Instagram in his honor. The images clearly show that the couple enjoys spending time together. He captioned the photo, “hey happy birthday virgin! I like doing life with you a lot!”

On the other hand, Ferrari also shared a photo of himself, Holt, and her dog on the occasion of Holt’s 25th birthday, captioning it, “Happy 25th to the world’s best dog mom.”

Many of their followers wished the actress a happy birthday after seeing the post. Grace Grundy also commented, “what a family pic” in the photo.

Moreover, Ferrari also wished his stunning sweetheart a happy Valentine’s Day on Instagram with a photo of the couple on February 14.

Holt was previously in a relationship with Luke Benward. They met in 2012 on the film Girls vs. Monsters set. The couple was also seen together on romantic outings. Later, Benward confirmed their relationship in one of the interviews.

Fans think the couple is adorable, but Holt and Benward decided to split up after years of dating and to share their beautiful memories on social media.

Olivia Holt and Luke Benward dated when they were younger. (Source: Twitter)

In 2015, the actress seemed to be in love when she began posting pictures of herself with an unknown man on social media. Holts’ fan was intrigued after seeing those photos and wanted to know who the man was.

Holt later broke her silence, saying in an interview, “I have a boyfriend; his name is Ray Kearin. We only recently met, but I’m so taken with him that it’s difficult not to talk about him. Right now, I’m just content and happy with my life. “I’m on a high.”

The couple dated for two years before splitting up in November 2017. After the divorce, rumors about Olivia Holt and Twilight actor Taylor Lautner started to spread. However, neither of them has addressed the rumors.

The actress appears to be happier than ever with Ferrari right now.

Olivia Holt talked about past relationships through music

Although Holt kept her relationship private, she acknowledged that her past romantic experiences served as inspiration for her music.

She told Elite Daily while promoting the single Love U Again, “I really want the stories that happened in my life to be reflected in this new chapter and era of music for me as an artist, whether they are things that I have experienced, things that I want to experience, or things that I’m currently experiencing.”

Holt added, “I’ve spent the last year and a half pursuing my dream of becoming a songwriter. I’ve learned so much from many incredibly talented songwriters and artists, and I’ve collaborated with many amazing producers. Now I feel more prepared than ever to release music, and I’m very confident in the music I’ve been creating.”

Get To Know Bobby Cannavale’s Wife, Children, and Net Worth

Posted on November 9, 2022November 9, 2022
Faye Marsay began acting at a young age before rising to prominence with her eclectic acting style.
Read More