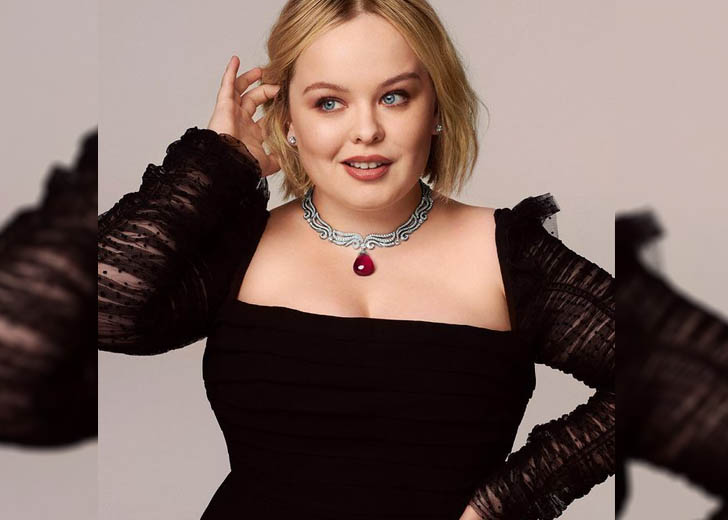 Nicola Coughlan is a talented Irish actress who is well-known for her portrayal of Clare Devlin in Derry Girls (2018-19) and Penelope Featherington in the Netflix series Bridgerton (2020-present).

Although she has garnered fame for her acting performances, she has also received quite the attention due to her weight. Coughlan, who weighs around 68 kg (150 lbs), has constantly received body-shaming comments, either from the critics or from the public.

The actress has mainly faced such comments during some of her interviews or press junket while promoting her movies and TV shows. Despite all of those comments, she has managed to dodge them and focus on her work only.

However, there was one instance that provoked her to give a fitting reply. It was on March 1, 2021, when the actress showed up for the Golden Globes virtual red carpet donning an amazing pastel yellow Molly Goddard gown, which was completed with a Ply Knits cropped black cardigan and De Beers jewelry  — she had posted the pictures on Instagram and Twitter, too.

Though she looked amazing in the dress, it didn’t stop one Twitter user from body-shaming her as they wrote, “The fat girl from Bridgerton is wearing a black cardigan at the Golden Globes. bc no matter how hot and stylish you are, if you’re a fat girl there will always be a black cardigan you think about wearing, then decide against, but ultimately wear bc you feel like you have to.”

Later, when that Twitter user faced backlash, they went on to defend their use of “fat” as a “descriptor,” and identify themselves as a “fat person”. When Coughlan noticed that comment, she gave a befitting reply as she wrote,

“I thought the cardigan looked ace. Molly Goddard used them on her runway with the dresses that’s where the idea came from, also I have a name.”

On the next day, March 2, the 5 feet 1-inch tall actress went on to write a series of tweets where she slammed those who frequently questioned her weight. Through those tweets, she mainly asked people to “judge actors for their work and not their bodies.”

Her first tweet was an article from The Guardian that she wrote around two years ago. “Hello! So I wrote this two years ago for the Guardian but I just thought I’d share it again. TLDR: Can we judge actors for their work and not their bodies,” Coughlan wrote.

In the next one, she requested people to stop asking women about their weight during interviews, as it is completely irrelevant. She also added that she has been “seeing a lot of interviews from 10 years ago where people go “Oh weren’t the questions so inappropriate!” unfortunately it’s still happening.”

In the third follow-up tweet, she stated that when she is asked about her body in interviews, she feels deeply uncomfortable and sad that she is just not allowed to talk about the job she does and loves.

In the next one, she wrote, “It’s so reductive to women when we’re making great strides for diversity in the arts, but questions like that just pull us backward.”

Then, she went on to say, in the nicest way possible, that she is not a body positivity activist — she is an actor and she would lose or gain weight if a role requires. “My body is the tool I use to tell stories, not what I define myself by,” she added.

In the second last tweet, she mentioned that it’s 2021 and “it would be nice if we didn’t have to keep having this conversation.” She further added that she would love it if she never get asked about this topic again during interviews.

In the end, she again put up her article from The Guardian and wrote, “Anyways, I put all my thoughts in what I wrote two years ago and that’s all I’ve ever wanted to say on it so have a read if you like.”

The article she wrote in The Guardian in 2018 was a reply to a critic who called Coughlan an “overweight little girl” in his review of the actress’s performance in “The Prime of Miss Jean Brodie.”

In her piece, the Irish actress had fired back with an essay in The Guardian, where she slammed the industry’s focus on women’s bodies. She had written;

“I hope in the future that more people will talk about our work, our inspirations, our drive, rather than our looks. A revolution is happening, and I want to play my part in it.”

Other than these, there have been several other occasions in which she has freely spoken on her weight and has given a smooth reply to them.

Coughlan’s comments still remain there, but, there are also some question which asks if she has done any weight loss to fully silence those body-shaming commenters. Well, currently there have been no reports of the actress doing weight loss.

And, as we have seen in her above-mentioned tweets, it can be believed that she is happy with her body and she doesn’t need to lose any weight unless a role requires it.