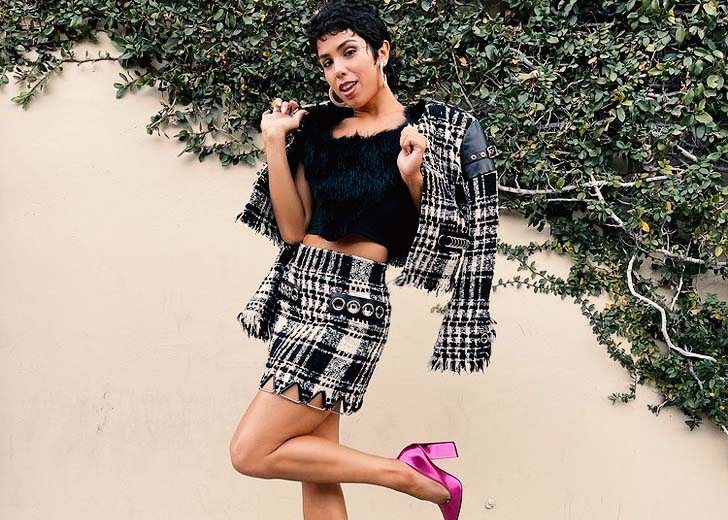 Jessica Darrow is a rising actress who first tasted the limelight in 2019 after portraying the role of Sarah in her debut movie Feast of the Seven Fishes.

Following that, she played the cameo role of Taylor Reese in the TV mini-series Following Hannah Stone and voiced in the podcast series titled Anomaly — both in 2021.

In late 2021, she received widespread fame after Disney’s musical-comedy movie Encanto got released. In the animated movie, she voiced the character of Luisa Madrigal. Additionally, she had also sung the Surface Pressure song of the movie.

Here is a look at Darrow’s family life, as well as her short biography, Wikipedia, and more!

Who Are Jessica Darrow’s Parents?

She is very close to her family members and shares a harmonious bond. However, she is quite private about her family life and usually doesn’t share many pictures alongside them on her social media handles.

Only a few pictures of her family are available on her Instagram feed. On March 9, 2019, she had posted an old picture of her parents with her and her sister. As the caption suggested, it was taken when they were in Cuba.

Jessica Darrow with her parents and sister. (Photo: Instagram)

Family means everything to the Presidential Scholar of the Arts semi-finalist, and it’s the only – among other – thing that inspires her.

During her interview with Ocean Drive in October 2021, Darrow was asked what inspires her. In reply, she first mentioned that she has an incredible support system consisting of family members and close friends.

She then said that their support and those people constantly inspire her. Adding more to her answer, she stated that working on the Encanto movie has reminded her of a few things that inspire her.

Her words were, “Also, working on Encanto has reminded me of how lucky I am to be a vessel for storytelling and a voice for people who may not typically have the opportunity to be heard. This opportunity will always continue to inspire my art.”

As the actress comes from a mixed heritage family, she has mixed ethnicity — Cuban-American. Additionally, she has Cuban/Hispanic roots. But, as she was born in Miami, Florida, she holds American nationality.

Born in 1995 as Jessica Taylor Darrow, she spent part of her childhood in Miami, Florida. Her birthday falls on January 7 every year. Thus, she is currently 27 years of age. Her zodiac sign is Capricorn.

Coming over to her height, she stands at an average height of 5 feet 5 inches or 1.65 meters. Her weight remains undisclosed now.

As for her education, she graduated with a BFA in acting from Rutgers University. Additionally, she attended the London-based Shakespeare’s Globe Theater for five months.

Her IMDb profile – created by her father – suggests that she was a national finalist “in spoken and musical theater by the National YoungArts Foundation.”

Is the 2018 Comedy Drama ‘Blindspotting’ a True Story? Here's an Overview