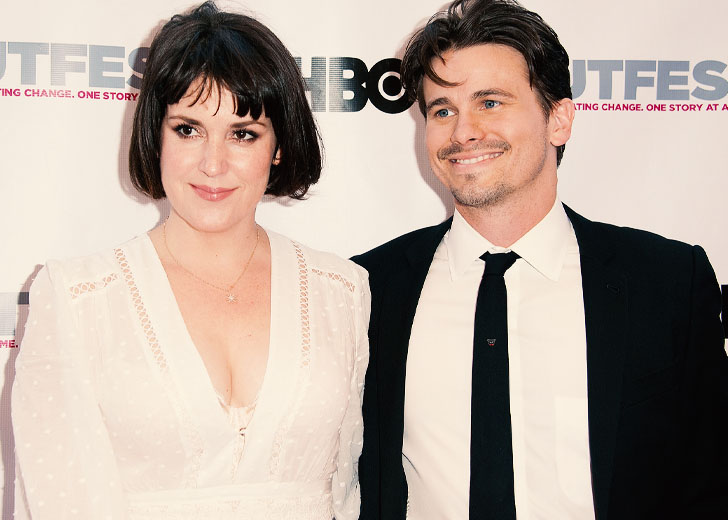 Melanie Lynskey is a talented actress from New Zealand who has been garnering popularity for her performances in several movies and TV shows, including Heavenly Creatures, Two and a Half Men, The Intervention, Togetherness, Mrs. America, Don’t Look Up, and Yellowjackets.

She has been balancing her work life very well and her personal life as well, which is going well. She was in a long-term relationship with Jason Ritter before getting engaged and eventually marrying him.

Read till last to learn everything about their relationship and more!

The actress first met her actor husband in 2014 while they were working on the same acting project.

They first befriended each other and later began dating. However, as both of them prefer privacy – to this date – it took time before the news of their togetherness broke out. And though their relationship was known, they continued to keep it low.

They only showed small bits of affection towards each other on social media too. But, the 2017 Valentine’s Day was different. On that day, Lynskey tweeted a gif of two dinosaurs kissing and wrote, “ONLY because it’s Valentine’s Day @JasonRitter.”

To that, Ritter replied with another gif of a heart emoji and jokingly wrote, “This is the most romantic thing you could have done.” These two tweets made the duo’s fans happy, and it was made more special by another big news.

On Thursday, February 16, 2017, the actress was on Hollywood Today Live. During the show, she revealed that she got engaged to Ritter. “Now he’s my fiancé,” she told the show’s co-hosts.

“Yes, I know, I’m announcing it,” Lynskey further added. Additionally, she mentioned that she wasn’t expecting a proposal from Ritter and was surprised. The actor had proposed to her while they were on a sofa and “it was cute” as per her.

Following their engagement, people were hoping to see their wedding too. Years passed, but they didn’t announce their wedding. However, after 2019, several media outlets began calling them husband and wife.

Seeing that, the actress made a tweet on October 17, 2019, where she wrote that Ritter is constantly referred to as her husband even though she never calls him that because they are yet to get married.

Melanie Lynskey and Jason Ritter Are Parents of One

Less than two years after getting engaged, in December 2018, Lynskey gave birth to a baby girl — name undisclosed.

The news of her pregnancy, as well as the birth of her daughter, was kept hidden from the media and the public.

However, the news eventually spilled out – unlike the couple’s privacy – when Ritter’s friend Neema Barnette took to her Instagram handle and announced it. She had shared a picture with the actor and wrote congratulatory messages on the caption.

“Congrats to Raising Dion Co Star Jason Ritter & his wife on the birth of their beautiful Sag baby girl,” she wrote in the first part.

Despite that post, the duo didn’t announce the news themselves. Later, on January 26, 2019, one fan of the actress saw Lynskey and Ritter with their baby girl at the airport and made a tweet about it. The tweet even got a like from Ritter, but the public announcement didn’t come.

Finally, on January 31, 2019, Lynskey confirmed the news via a Twitter post. She first said that she and her beau were lucky to keep the good news between their friends and family only, at least for some while.

“But I guess the story got out, so! Yes! @JasonRitter and I had a daughter in December. We love her so much; she’s perfect. Thanks to everyone for your sweet messages,” she added.

In a follow-up tweet, she addressed the outlets that reported she welcomed her child “quietly” as she was “blasting A$AP Rocky and yelling a lot.” She also thanked the doctors and nurses at Atlanta’s Northside Hospital who were by her side “from labor & delivery to post partum.”

Melanie Lynskey and Jason Ritter Has Not Confirmed Being Married Yet

Lynskey and Ritter seem to be married now, or so it seems from the actor’s tweet of May 2021.

On the occasion of Mother’s Day, May 9, 2021, he took to his Twitter handle to express how wonderful mother Lynskey has been to their daughter. He first wrote, “The last couple years I have watched my wife @melanielynskey be the most incredible mother to our daughter.”

In the latter part of his tweet, he continued to shower beautiful words for his partner. Lynskey also jumped into the tweet’s comment section and wrote, “I love you my husband!!” with a red heart emoji attached.

Considering that the couple is now calling each other husband and wife, it seems like they got married and have been keeping everything related to their marriage upto themselves. But they are yet to make an official announcement.

Lynskey — whose net worth is $5 million — was previously in a marital relationship with American actor Jimmi Simpson.

The now-separated duo first met each other in 2001 while filming the TV series Rose Red, in which they shared the screen. Their relationship went from co-stars to partners as they started dating.

In 2005, they shared the engagement rings. Around two years later, on April 14, 2007, they shared the wedding vows. Their wedding was held in Lynskey’s motherland, in Lake Hayes, Queenstown.

In the initial days, everything seemed fine in the two’s marital relationship. However, they weren’t meant to be together forever.

By April 2012, they had already separated. And five months later, on September 25, Lynskey filed for divorce from Simpson, citing irreconcilable differences. Their divorce was finalized on May 22, 2014.