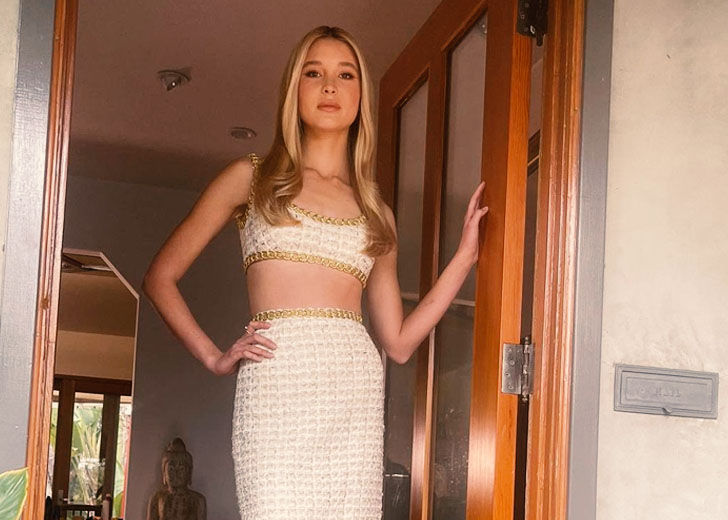 Isabel May is a talented American actress who first tasted the limelight when she portrayed the role of Veronica Duncan in the CBS television show titled Young Sheldon.

Her popularity skyrocketed when she landed the lead role of Katie Cooper in the hit Netflix show titled Alexa & Katie. She was a part of the show in all of its three seasons, from 2018 to 2020, and appeared in 39 episodes in total.

Apart from those two, she has appeared in movies and TV shows such as Age of Summer, Let’s Scare Julie, Run Hide Fight, I Want You Back, and 1883. Now she is preparing for her role in her next movie, The Moon & Back.

Due to her ever-growing popularity, people have been very keen to learn more about this rising actress. Read on as we discover everything we know about May, including her age, parents, height, rumors, and more!

How old is Isabel May?

As of this writing, May is 21 years of age. She celebrates her birthday every year on November 21. Her zodiac sign is Scorpio.

Born in 2000, she was raised in Santa Monica, Los Angeles, California. Apart from Los Angeles, she has also spent some part of her childhood in New York City.

As for her academics, she seems to have completed high school. Speaking with Terroir Magazine, she mentioned that just some months before she booked a role in 2018; she started taking her classes online — after her first year of high school.

Isabel May remains private about her parents

While American singer and actor Tim McGraw and his actress wife, Faith Hill, might be May’s fictional parents, the young actress is yet to share the details of her real-life father and mother.

It is so because she is a private person and likes to keep her family life details upto herself. However, she did mention that she has an amazing family during her interview with Bello Magazine.

In that interview, she was asked how she balanced the “growing pains” of the entertainment industry and her personal life. In reply, she said, “As for the “growing pains,” I have such an amazing family and a pretty private life (plus I’m so new to all of this), so I haven’t experienced any of those.”

Additionally, she stated that she once went to a small village in France one summer with her family and its experience was wonderful. “I’d love to go again someday,” she further added.

Besides that, May has talked about the supportiveness of her parents in her other interviews. She had said that her parents supported her acting dream and even allowed her to study online to focus more on acting.

How tall is Isabel May?

The Let’s Scare Julie actress has a slimly built body and stands at a towering height of 5 feet 9 inches or 1.75 meters. She likes to maintain her body weight and reportedly weighs around 56 kg 123 lbs.

Additionally, her body measurements are 32-24-34 inches. Her hair color is blonde, her eyes color is hazel, and her ethnicity is white.

Fan queries about Isabel May

The chemistry between the three in the show was so amazing that many wondered if May was McGraw and Hill’s real-life daughter. There were queries such as: “Is Isabel May Tim McGraw’s daughter?” and “Is Isabel May Faith Hill’s daughter?”

However, those talks are just false, and May isn’t McGraw and Hill’s real-life daughter. Nonetheless, May won’t mind being the couple’s fourth daughter — McGraw and Hill have three daughters.

Isabel May as Elsa Dutton in ‘1883’ (Photo: Emerson Miller/Paramount+)

In an interview with Town and Country Magazine, she said that although she loves her own family very much, she won’t mind being McGraw and Hill’s fourth daughter. Her words were:

“Tim and Faith are two of the loveliest people I’ve ever met. They’re so respectful of one another. They have three beautiful daughters, and I love my parents to death, but I’m still trying to become like daughter number four a little bit.”

Another talking point about May is that she is often compared to a fellow American actress Jennifer Lawrence. It might be because they have quite a resemblance. So, fans have been asking: “Is Isabel May related to Jennifer Lawrence?”

Sorry to disappoint again; May isn’t related to Lawrence, though May will not complain if she gets compared to Lawrence. In an interview with Entertainment Tonight, May said that she had been told she looks a lot like Lawrence many times since she was 13-year-old.

She said, “It’s not a bad thing at all. It’s the biggest compliment in the world. I admire that woman to death. She is the coolest human being I’ve ever seen in my life.”

One last rumor, or shall we say fan query, about May is: “Does Isabel May have cancer?” Fortunately, the answer to that question is also no.

However, her character’s best friend in the show Alexa & Katie, Alexa, did have cancer. Alexa was diagnosed with Leukemia, due to which she stayed in the hospital for about three weeks. She also went through a high dose of chemotherapy.

May has achieved a lot in a limited time. And one of those is a healthy social media fan-following.

The actress is currently available on Instagram only, which she created around early 2020. As of now, she has garnered over 658,000 followers.

However, May doesn’t have much presence on the photo-sharing platform and remains vividly inactive. She has only made five posts, and the last time she shared some snaps on Instagram was on September 13, 2020.