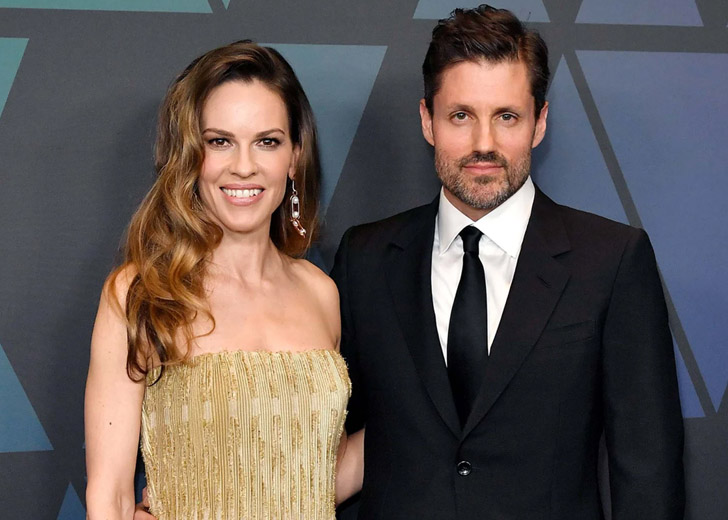 Hillary Swank has been in the industry for the past two decades with impressive filmography. As a result, she has amassed a massive net worth and fanbase.

But out of all her fans, perhaps, her biggest fan is none other than her husband, Philip Schneider. The pair have been together for six years, and now, they are about to be parents.

Here is everything we know about Swank’s love life and career.

Who is Hilary Swank married to?

Before Swank got together with Schneider, she had three significant partners. First, she was married to actor Chad Lowe.

The pair met while filming Quite Days and married on September 2, 1997. Eleven years after their marriage, on January 9, 2006, Swank and Lowe announced that they would get divorced. Their divorce was finalized on November 1, 2007.

The Alaska Daily star started dating her agent, John Campisi, the same year. The pair dated till May 2012, and after that, she started dating former professional tennis player Rubén Torres. They got engaged as well but ended their relationship in June 2016.

Coming over to Swank’s present relationship with Schneider, they have been relatively private about their relationship. So, not much is known about them.

According to Vogue, the couple dated for a year and a half before getting engaged. Swank and Schneider first met on a blind date arranged by Misha Collins’ wife, Victoria Vantoch, and another close friend, Jean.

Swank told Vogue that she met her now-husband at 10:00 a.m. and parted ways at 11:00 p.m because they had a good time together. After dating for a brief time, the pair engaged privately in 2016.

Schneider went down on one knee while on vacation in Colorado in 2016. And he made sure that it was a moment to remember, especially for Swank, as her beau ensured her dogs were present when he asked her to marry him.

Swank explained the proposal to Vogue. She said, “We stumbled upon a beautiful sanctuary deep in the mountains. It had a stunning waterfall that cascades down to rustic cabins built in the 1800s, surrounded by beautiful pines and big skies. One evening, Philip dropped to his knee in front of the waterfall and proposed—he sweetly made sure my dogs were nearby so they could bear witness!”

The duo shared the wedding vows on August 19, 2018, in Redwoods, California. They exchanged vows in front of their friends and families, and Mariska Hargitay served as the maid of honor at the romantic ceremony.

Describing her marriage, Swank said, “It was timeless. There is just no other way to describe it,” She was “overwhelmed with such gratitude” to be married to the man of her dreams. For the P.S I Love You star, her wedding was a dream come true.

On October 5, 2022, Swank announced that she was pregnant with twins on Good Morning America. She said, “This is something that I’ve been wanting for a long time, and my next thing is I’m gonna be a mom. And not just of one, but of two. I can’t believe it.”

Hilary Swank’s filmography and net worth

Swank is a wealthy American actress with a net worth of $60 million. She has become one of Hollywood’s most recognizable faces throughout her career. She is also one of the most decorated actresses in the industry, having won numerous awards and received multiple nominations.

Swank’s acting career began in the 1990s, but she played notable roles for several decades. Her career has been consistent and versatile, and she is still a significant force in Hollywood, whether in front of or behind the camera.

Swank’s first significant acting role came in 1992 when she was cast in a minor role in the television series Buffy the Vampire Slayer. She went on to star in the direct-to-video drama Quiet Days In Hollywood.

She began to book more prominent starring roles in films such as The Next Karate Kid and Cries Unheard: The Donna Yaklich Story in the mid-1990s.

Further roles followed in films such as Kounterfeit and Terror in the Family. Swank’s next big break came in 1997 when she landed a recurring role as a single mother in the television series Beverly Hills, 90210.

She was eventually fired from the show after 16 episodes, which severely harmed her self-esteem. However, she rebounded from this incident with a critically acclaimed role as a trans man in Boys Don’t Cry.

She was only paid $3,000 for the role, but many critics praised her performance as the best female performance of 1999. Hilary Swank went on to win both the Golden Globe and the Academy Award for Best Actress.

She won both awards again in 2004 after appearing in Million Dollar Baby. As a result, she became one of only two actresses in history to win both awards twice with only two nominations.

Swank’s next role was in the 2007 film Freedom Writers, for which she received positive reviews. That same year, she was cast in the horror film The Reaping.

To cap off a busy 2007, Hilary starred alongside Gerard Butler in the romantic comedy P.S. I Love You. She portrayed aviator Amelia Earhart in the 2009 biopic Amelia, which she also co-executive produced.

In 2013, she appeared in Mary and Martha; in 2014, she portrayed an ALS patient in You’re Not You. She landed a role in the heist comedy Logan Lucky near the end of the decade and joined the cast of 55 Steps.

She then appeared in the film What They Had in 2018 and had a recurring role in the series Trust that year. She then starred in the divisive film The Hunt, which did poorly at the box office due to the 2020 coronavirus pandemic.

Her latest project is Alaska Daily, which was released on October 6, 2022.