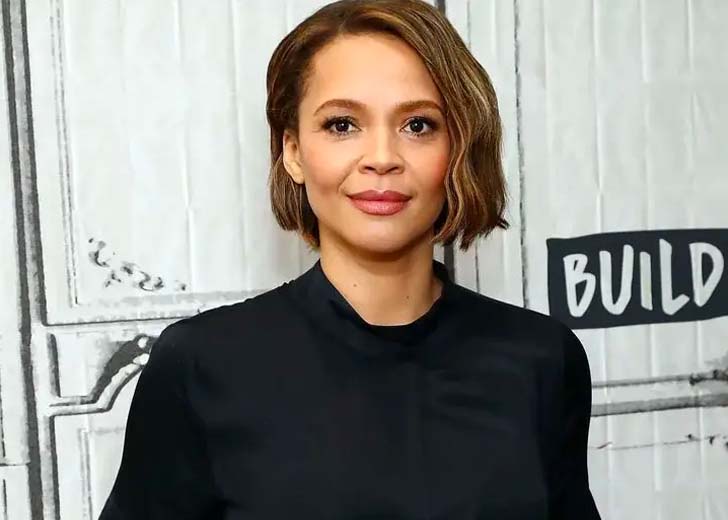 Carmen Elizabeth Ejogo, also known as Carmen Ejogo, is a British actress and singer, well-known for the film Selma. She also appeared in movies like Boycott, Away We Go, The Purge Anarchy, and many more.

Carmen Ejogo’s parents divorced when she was a child

The Self Made actress was born on October 22, 1973, in Kensington, London. She didn’t seem to have a very happy childhood.

Her mother, Elizabeth (née Douglas), was Scottish, and her father, Charles Ejogo, was a Nigerian. Her parents got divorced after two years of their marriage.

Carmen at the premiere of Fantastic Beast (Image Source: Instagram)

They had two children, including Carmen and her brother Charles. Her mother raised both children independently after their separation, with so much difficulty.

Carmen lost her father when she was in her early teens. Although she never was close with her father, she was deeply affected by his death.

Carmen faced racism in the initial stage of her career

It was not easy for 49 years old actress to make her place in Hollywood. Carmen often was the victim of racism early in her career.

Ejogo had reserved herself for stardom at a very young age.

At the age of 11, she was seen playing a small part alongside David Bowie in the movie Absolute Beginners. Yet she hadn’t been given the many offers to choose between her character.

Speaking with The Guardian in June 2017, she shared, “The industry wasn’t really ready for someone who looked like me, to put me at the helm in any kind of way.”

She further explained that the industry didn’t just judge her for her ethnicity but also her age.

She spoke she was made better use now as an actor at that age than she ever would have been made use of as a 20-year-old.

The Self Made actress was also involved in the music industry since the 1990s. She is a vocalist and has collaborated with several artists.

The choice of the film she was given was based highly on her race. Despite her swift acting qualities, Hollywood still could not decide what to do with her. But she eventually made it in the industry.

Carmen’s first husband was English Music producer Tricky originally named Adrian Nicholas Matthews Thawsne was born on January 27, 1968, in Bristol, England. He is best known as one of the originators of the Trip-Hop music genre.

Their marriage didn’t last too long, and they remained together for two years between 1998 to 2000.

After a year of divorce from her first husband, Carmen was married to actor Jeffrey Wright on October 18, 2001, at the age of 28 years.

Jeffery was born on December 7, 1965. He is a Tony Award-winning actor for his role in Belize in Angel of America. As per the report of Celebrity Net Worth, his estimated net worth is $8 million.

This duo had met on the sets of Boycott, The TV movie where they were seen as a couple. They have two children together.

Their first child, son Elijah, was born in 2001, and they welcomed their second child, daughter Juno in 2004.

Jeffery and Carmen ended their knot after fourteen years of their marriage. Now the actress in her forties is not linked to anyone, and she seems happy as a single mother.

Carmen and her former husbands do not talk much about the end of their relationship, and it seems like they do not want to disclose more about their private life in public.

Who Are Alba Baptista’s Parents? Inside Her Personal Life

What Happened to Maia Campbell? The Downfall of the 90s Star