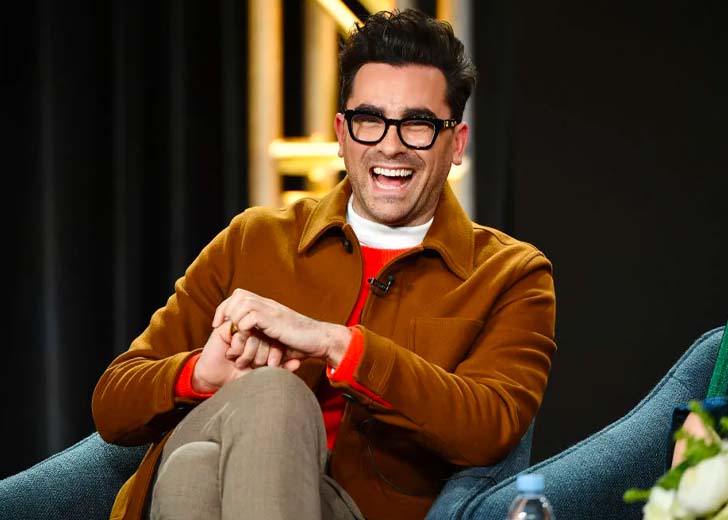 All about Dan Levy’s love life!

Dan Levy was born into fame as the son of Eugene Levy and Deborah Divine. But he didn’t let his parents define who he was — instead, he took inspiration from them and made his own name in the entertainment industry.

Today, he stands as the well-known co-creator, writer, and producer of the hit CBC sitcom Schitt’s Creek. In addition, he is one of the show’s lead stars as he portrays the role of David Rose.

And for all that he has done in Schitt’s Creek, he has bagged multiple awards, including four Primetime Emmy Awards, seven Canadian Screen Awards, and two Gold Derby TV Awards.

With all the fame Levy has been getting in the past few years, it’s evident that people want to learn more about him. And one of the things that they want to know is about his personal life.

Yes, you heard that right! Levy is out and proud, and he has been the same since he was 18. However, many might not have known about his sexual orientation.

It’s because the Canadian actor had previously eschewed labeling his sexual orientation publicly. Nonetheless, during his 2015 interview with Flare, the outlet had publicly mentioned Levy was a “member of the LGBT community.”

Five years later, Levy shed more light on his sexuality when he appeared on Watch What Happens Live With Andy Cohen alongside his Schitt’s Creek co-stars Eugene Levy, Annie Murphy, and Catherine O’Hara.

Dan mentioned that he came out of the closet when he was 18 years old, after which his father, Eugene, added that he and his wife [Dan’s mother] had already known. Similarly, Dan opened up about his mother’s role in helping him come out and be comfortable.

He said, “My mom asked me over for lunch one day, and I said, ‘Yes.’ She almost knew. My mom and I have a very close relationship in that sense, and it almost felt like she knew that I was ready.”

Later, in his September 2020 interview with Attitude, Dan talked about feeling compelled to represent the LGBTQ+ community as he had grown a significant large platform. He also reflected on the chances to create a story that would show some of his and his friends’ experiences.

He explained further, “It felt in a way kind of irresponsible not to seize that opportunity and tell stories that meant something, and stories that I haven’t really seen that much on television.”

In the end, the producer mentioned that he felt very proud of their work on Schitt’s Creek and loved the stories they told through the medium of the show as they gave a voice to the essential things.

Is Dan Levy dating a boyfriend?

As Levy is openly gay, the possibility of him being married to a wife or dating a girlfriend is none. But does he have a boyfriend? The answer is unknown as Levy is private and hasn’t shared many details about his personal life. So, it’s only better to say he is single as of 2022.

But, although it isn’t known if he is dating or has dated someone, he has occasionally shed a few details on his feelings about love and other topics. For instance, during his March 2015 interview with Out Magazine, he revealed he wasn’t dating anyone and how strange of a feeling it was.

As he went on, he wondered if shutting himself off from relationships because of his work was a worthy excuse. He said, “I feel like I only get one shot at this. I hope that I can find someone when it’s all done, or when things are a little bit more smooth.”

“But the eye has really been on making sure that the show is as good as it can be,” Levy added.

Similarly, in his December 2020 interview with Bustle, the 39-year-old Canadian opened up about his desire to “date more,” even though he once felt that doing something he loved was enough. He explained;

“So to [want to] make space for someone else…in a way, it is the ultimate filter. You’re basically saying, do I want to carve out the space in an already full and fulfilled life for this person? And a lot of the time, the answer is no.”

Nonetheless, Levy remained hopeful of finding someone despite his busy working career. He said, “But it only makes it that much better when the right person comes along.”

In the same interview, the actor also revealed some details about the difficulties he faced while dating life in college. He said college wasn’t a “place of value” for healthy dating relationships. Explaining further, he said;

In the end, he stated that he was afraid to be fully vulnerable in those relationships but clarified that he didn’t want to be that kind of adult.

Finally, in February 2021, Levy answered some personality-revealing questions during Vanity Fair’s Proust Questionnaire. One of the questions the interviewer asked was, “What or who is the greatest love of your life?” Levy replied, “I don’t think I’ve met him yet, so I’m going to say my dog, Redmond.”

Furthermore, when he was asked why he likes London, England, the most among other places, he said, “I lived there for a little bit in my early twenties, and I loved it, and I go on a lot of dates there, to be perfectly honest.”