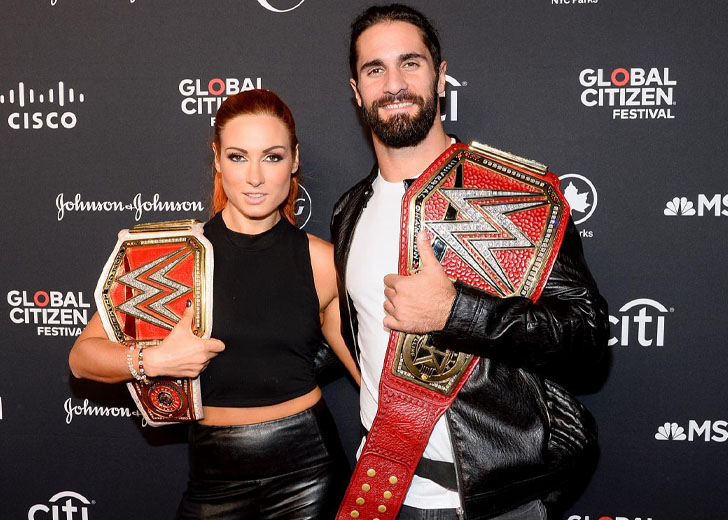 Seth Rollins – real name Colby Daniel Lopez – is regarded as one of the greatest professional wrestlers in all sports and entertainment. He has achieved great things ever since he debuted with The Shield faction in WWE.

As of now, he is a grand slam champion, winning every major title available in WWE. Similarly, he has managed to become one of the top performers available on the WWE roster and is stealing the show as a heel character.

The year 2019 could be regarded as one of the best years of his professional life as he won the Royal Rumble and went on to headline WrestleMania 35, where he defeated Brock Lesner for the Universal Championship.

But that year was also a great one in terms of his personal life as he made his relationship with fellow WWE superstar and current Raw Women’s Champion Becky Lynch – real name Rebecca Quin.

Months later, the couple got engaged. In the next year, they welcomed their first child together, and in 2021, they finally tied the knots.

As per TMZ Sports, Rollins and Lynch initially started as friends who met each other through their time in WWE. But, they decided to step up and officially began dating in early 2019.

In one of her interviews, Lynch had mentioned that they had no intention to turn their friendship into a relationship, but then, Rollins took the first step and pitched the idea of them being together. And they eventually began dating.

Although they started to date in early 2019, the couple kept everything quiet for some time. However, rumors of their romance started to come out once they were caught in public and sitting next to each other at the WWE Hall of Fame festivities.

On May 12, 2019, the truth was finally revealed when Lynch got into a Twitter banter that went back and forth with fellow WWE superstars Beth Phoenix and her husband Edge. In the end, Phoenix wrote, “Wait wait…are we involving our men now….”

To that, Lynch replied by writing, “I’ll ask him…..” and mentioned Rollins’ Twitter handle, officially confirming the rumors that they are in a relationship.

When Lynch did that, Rollins also took the opportunity to make things official from his side. On May 13, 2019, he took to his Instagram handle to share a black-and-white picture – seemingly taken backstage of WrestleMania 35 – in which he was kissing Lynch.

And just three months later, on August 23, 2019, Lynch announced via Instagram that she had gotten engaged to Rollins. She shared a picture with her now-husband as they posed on a beach.

On the next day, Rollins took to his Twitter handle to share a photo of Lynch as she sat on their vehicle and flaunted her engagement ring. In the caption, he mentioned that he was the luckiest man alive.

Seth Rollins and Becky Lynch welcomed a baby in late 2020

Lynch surprisingly announced her pregnancy in early May 2020 during a televised segment of Raw when she relinquished her Raw Women’s Championship and handed it to then-Women’s Money in the Bank winner Asuka.

While doing so, she announced her pregnancy and told Asuka to go and be a warrior while she goes to be a mother. Then, on May 11, 2020, she did an exclusive interview with People Magazine, where she further talked about her pregnancy.

She said, “I’ve always, always wanted kids. I’m just so career-focused that it became one of those things that, when you’re chasing a dream for so long, I always wondered, ‘Am I going to get around to it? Is it going to happen for me?'”

“When we got together, things started to look a lot clearer and I knew he was the person that I wanted to have kids with — that this was going to happen and it was just a matter of when.” she added.

Lynch then said that she and Rollins only found out about her pregnancy after several pregnancy tests. “I took the first one wrong. Then I took a few more tests until I got a digital one that just said the word ‘Pregnant.’ I was with Seth at the time, and he just threw his hands up in the air, all excited!”

Recalling that moment in another interview with People, Rollins said, “Oh, it was great, I was so stoked. We got the test back and it said pregnant and she was more shocked and I was just hyped. I was so excited, I think, right out of the gate. I wish we had a camera on because I threw my arms up in the air; I was so excited about it.”

He continued, “It’s one of those things where you never know when you’re going to be ready for something like that, but as soon as it happened, I was like, ‘Yeah, I’m ready to go, man. Let’s do this thing.’ It’s been a journey so far, the first half of it.”

At that time, it was mentioned that they would welcome their baby in December. Lynch announced the birth of their child, a daughter named Roux, on December 7, 2020, via Instagram – the actual birth date is December 4, 2020.

Since then, the parents of one have been busy raising their kid. Lynch recently returned to WWE during its SummerSlam pay-per-view, where she defeated Bianca Belair and won the SmackDown Women’s Championship.

Seth Rollins and Becky Lynch got married in 2021

Around six months after they welcomed their baby girl, on June 29, 2021, Rollins and Lynch shared the wedding vows among close friends and family.

On that same day, Rollins had hinted about his wedding when he shared an Instagram story featuring his now-wife standing in an open field with a clear view of the ocean and sky.

He wrote, “Seems like a fine day to (finally) get married.” Later, the news of their wedding was officially confirmed by WWE.

Although married, nothing much has changed for the couple as their love for each other and their daughter continues to grow more with each day passing.